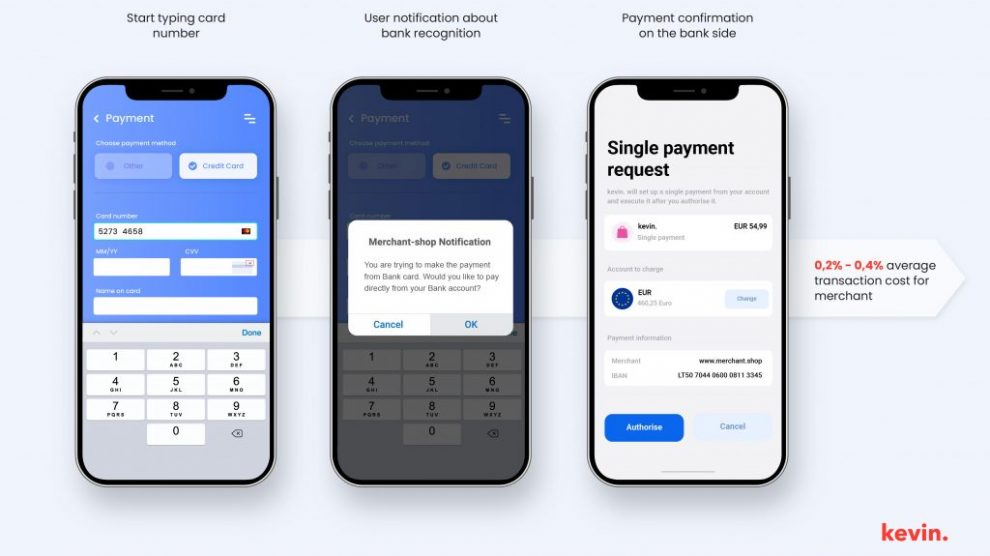 A fintech start-up from Lithuania is revolutionising the way that card payments are processed, potentially offering huge savings to merchants.

Debit and credit card networks dominate the payment processing sphere across the globe. But now, a Lithuanian fintech start-up, Kevin, is issuing a challenge to this status quo, building new infrastructure based on PSD2 and account to account (A2A) payments.

PSD2 (Payment Services Directive 2) is an EU-level directive first introduced in 2015 that regulates banking and payment services. The most notable change is in the creation of APIs that banks must, by law, open up to third party services.

This opens the way for A2A transactions that are initiated by these services. For the consumer, this means greater choice, and easier user experience flow, and for merchants it means lower fees and faster payouts.

This is where Kevin (stylised as kevin.) comes in. The company, founded in Lithuania, currently operates in eight countries, with plans to expand across Europe.

Where Kevin differs from most other fintech start-ups is in its focus. Unlike many, it is not targeting end consumers per se, instead looking to become the next payment infrastructure that will eventually supplant the current card dominated market.

“We are thinking from the customer perspective, for the user experience, but from the business side we don’t see the opportunities in online check-out payments and so on,” explains Kevin’s COO Pavel Sokolovas.

In order to issue a challenge to the card networks, the company has launched two “first-of-their-kind” services. The first is a way in which consumers can link their bank account through an app and then pay merchants directly from their bank accounts. Parking operator uniPark is already using this in its mobile app.

The second is a way for merchants to “redirect” customers from paying with their card, to paying with A2A. This way, merchants can cut down on their card fees. According to the company, merchants in Europe pay more than 10 billion euros annually in fees for online payments using cards. This includes gateway fees, transaction processing fees, and interchange fees.

But for merchants that integrate Kevin’s ways of doing things, there is a saving of up to 90 per cent, according to the company.

How it works, according to Mr Sokolovas, is that when customers start typing in their card number, the system can detect from the first eight digits whether it’s a credit or debit card and from which bank it is issued. If it’s a debit card, the system gives the customer the option to switch to an A2A payment.

And since PSD2 includes the provision that banks must institute safety checks for card transactions (Strong Customer Authentication, or SCA) consumers must confirm at bank side. Kevin’s method excludes the card scheme middlemen, offers savings to merchants, and doesn’t alter the user experience for the end consumer.

“It’s maybe not so magic, it’s very simple. But nobody was using this to compete with Visa or MasterCard. So yes, it’s simple, but very very powerful,” explains Mr Sokolovas.

When it comes to to the future of the payment system, and the role of debit and credit cards, Mr Sokolovas hopes that card companies could eventually become partners rather than competitors. It’s really all about cutting out the middlemen such as processing companies and gateways, that eat up money from Visa and MasterCard too.

“In the long run, in the future, for Visa and MasterCard we are more like partners, not a competitor, so they can use our infrastructure to achieve the same flow for customers,” Mr Sokolovas says.

MasterCard already appears to have recognised that, naming Kevin as winner of the MasterCard Lighthouse Programme in the Baltic region.

Later this year, in October, the firm is launching another product that will enable PSD2 compliant payments via mobile at retail POS terminals. Banks will be able to incorporate the company’s SDK (software development kit) into their own payment apps, with nothing changing for the consumers.

“You will pay as you usually do, with a card, or by tapping your phone,” Mr Sokolovas explains. “Nothing changes for the consumer, what we are changing is the way the payment is processed.”

Launching several first-in-class products hasn’t escaped the notice of venture capitalists. Not that there wasn’t scepticism in the beginning.

“It’s a little bit hard, even for the professionals from the payments [industry], it’s hard to understand what we are doing. Because they’re coming with the old baggage that they have and six months ago some banks and [VC] funds were saying — ‘Are you crazy – it’s impossible’,” Mr Sokolovas says. “Now we are live in eight countries.”

Once the firms current Series A funding round is complete, Kevin plans to “go wide”, as Sokolovas puts it.

“We are raising money to go wider […] Our plan is to go live in 21 countries this year.”

Kevin is currently operating in Finland, Sweden, Estonia, Latvia, Lithuania, Poland, Portugal, and the Netherlands. To date, the company has secured 3.4 million euros in funding, including 400,000 euros from Startup Wise Guys and a further 1.5 million euros in angel investments.