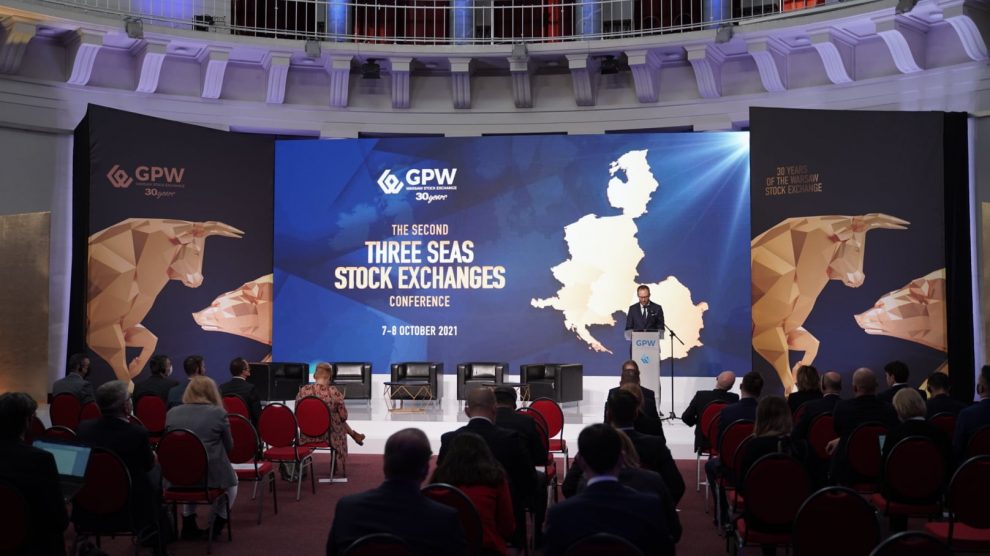 Shared knowledge and experience, and a unified voice, are crucial for the continued growth of Central and Eastern Europe’s stock exchanges.

The bosses of emerging Europe’s leading stock exchanges last week renewed their call for stronger collaboration and expressed their hope that the Three Seas Initiative (3SI) can be a driver of growth and investment.

Speaking at the second Three Seas Stock Exchanges Conference, held in Warsaw as part of the Warsaw Stock Exchange’s (GPW) 30th anniversary celebrations, Marek Dietl, CEO of GPW, said that while the region has been successful at developing East-West cooperation, “more needs to be done to promote North-South collaboration”, adding that the total turnover on the Three Seas exchanges topped 120 billion euros last year.

Before the Covid-19 pandemic, the 3SI’s territory had seen the fastest rate of economic growth in Europe – with Romania, Hungary, Estonia, Poland, and Lithuania leading the bloc.

The key objective of the Three Seas Stock Exchanges initiative meanwhile is to develop co-operation of Central European exchanges in order to jointly promote their markets and companies and attract investors and capital.

“The potential is evidently there,” said Richárd Végh, CEO of the Budapest Stock Exchange.

“We need to encourage cross-border investors to engage in the region.”

His thoughts were echoed by Aleš Ipavec, president of the management board of Slovenia’s Ljubljana Stock Exchange, who said that, “we have to attract investors from other regions to the Three Seas region. In my opinion, this can be done through the engagement of stock exchanges, which is already there, as well as the entire financial industry.”

Adrian Tanase, CEO of the Bucharest Stock Exchange, said that while synergies are invaluable, “we have to be patient when we implement our initiatives”.

“With the [Covid-19] pandemic coming to an end, we need to consider further and broader promotion of the region as our flagship product.”

Another priority of the initiative is to present joint positions on EU capital market regulation.

“The Three Seas countries represent half of all EU member states,” said Petr Koblic, CEO of the Prague Stock Exchange.

“We have to be heard and our opinions must be acknowledged. It is key that we speak with a single voice in relations with the European Commission.”

“Overregulation is a major challenge for small exchanges. Issuers in Bulgaria want to migrate to markets where regulation is less strict,” said Manyu Moravenov, CEO of the Bulgarian Stock Exchange.

Paweł Nierada, first vice president, Bank Gospodarstwa Krajowego (BGK), outlined the framework of the Three Seas Initiative Investment Fund, set up in 2019, of which BGK is the initiator, co-founder and principal investor.

“The Three Seas region has huge potential owing to its population, average GDP growth in the last five years, and demand for infrastructure investment on the order of 600 billion euros,” he said.

“The Three Seas Initiative Investment Fund is building a solid asset base and has engaged in the first three investment projects which span different segments of infrastructure and different countries of the region. The fund’s expected gross return rate is 12-15 per cent.”

Last month, a major report revealed that the 3SI can also offer post-Brexit Britain a great opportunity to engage with EU partners.

The report, commissioned by Conservative MP Daniel Kawczynski found that the 3SI – of which the US is currently the major external partner – needs “significant political and economic support”.

The report highlighted 3SI’s successes since its inception, including the development of the 3SI Investment Fund and a plan for 77 priority infrastructure, energy and digital projects.

The GPW has long been a champion of smaller exchanges in Central and Eastern Europe, and the conference in Warsaw was attended by strong delegations from Armenia and Georgia, neither of which are 3SI members, but which are keen to tap into the expertise and experience the initiative can offer.

“The Three Seas Initiative helps smaller exchanges to be heard and get more recognition,” said Marek Dietl. “It is our responsibility to support these countries in their integration with global finance.”

And Poland is particular is seen as being in prime position to assist.

“Every post-socialist country had to face the challenge of transition from a centrally controlled economy to an open market economy. Poland passed the test with flying colours. As the Polish capital market is now mature, GPW’s expertise can be useful in the development of the Armenian capital market, not least from the perspective of the central bank. We want to open up space for diversity in the financial system,” said Davit Nahapetyan, Central Bank of Armenia.

“The Georgian Stock Exchange is now at an earlier stage of development than GPW,” added Nikoloz Gagua of the National Bank of Georgia.

“We have to put in additional efforts to develop the Georgian capital markets in order to move to the next level of economic development. Integration in the Three Seas region will play a key role.”