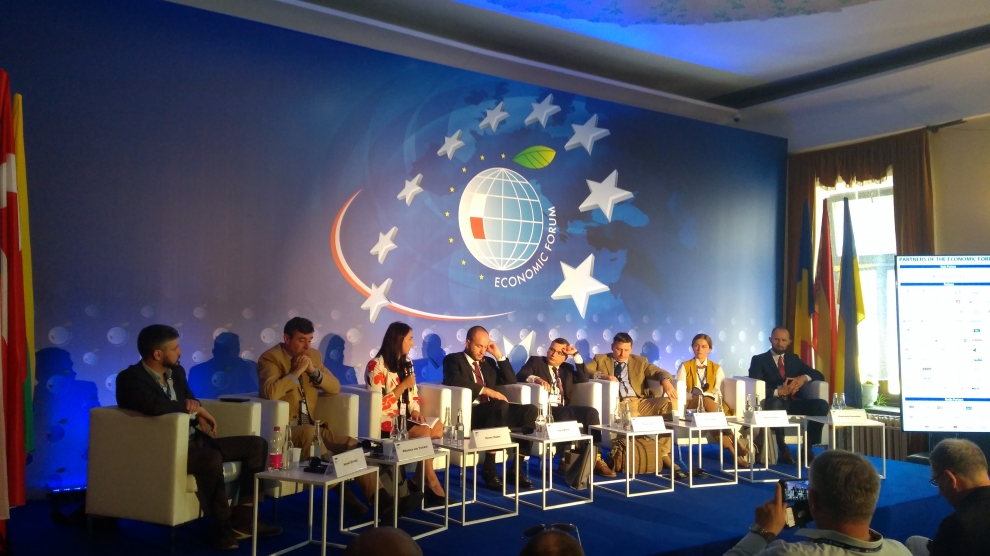 On September 7, Ukraine and Russia concluded a prisoner exchange which was widely seen as one of the first real steps towards finding a way to end the ongoing conflict in eastern Ukraine. However, while almost the entire international community hailed the prisoner swap, there remain around 4,000 Ukrainian detainees in Russia, a number which highlights just how much work still needs to be done.

Discussing the past five years of the Ukraine crisis at the Krynica Economic Forum on September 5, Pavel Luzin, a Russian political scientist and senior lecturer at Perm University, argued that the sanctions introduced against Russia over its invasion of Ukraine can create motivation for the Russian government, as well as for the Russian public, to come to a long-term settlement of the Donbas crisis, but added that this might come only in the next decade.

“In Russia, there will be a decline of power,” he said, pointing to increasing domestic pressures mounting against the president, Vladimir Putin. He stressed that sanctions should be in place so that the next Russian leadership would be pushed for a peace settlement in not just Ukraine, but in Moldova and Georgia, as well.

“The sanctions help Russia to change from the inside,” he emphasised.

Speaking about the 4,000 Ukrainians who have been detained in Russia, Yuriy Bilous, a lawyer and human rights expert at the International Research Centre of Security Problems, noted that Ukraine and the international community should be focusing more on finding out whether there is discrimination against Ukrainian citizens, adding that the criteria for determining whether a given case is political or not should be redefined since a number of Ukrainians were convicted based on unfounded or trumped-up charges.

Mr Bilous argues that individual sanctions should be targeted against those Russians who violate the rights of Ukrainians.

“At the moment, there are 1,700 [people] against whom sanctions should be applied. The list includes prosecutors and even one judge,” he said.

“We have to follow legal actions, financial operations taken by people who are on our sanctions list, who are the ones that make decisions that breach the rights of Ukrainians in Russia,” he stressed, adding that restrictive measures might not be effective in the short term.

“If sanctions are stopped, it would mean a surrender, rather a capitulation,” said Petr Pojman, chairman of the Czech NGO Team4Ukraine, underlining that the “group of untouchables” who are the main reasons for the outbreak of the Ukraine crisis, must be targeted.

According to Arseni Sivitski, the director of the Center for Strategic and Foreign Policy Studies, a Belarusian think tank, the effectiveness of sanctions comes down to two questions: Is the current Western sanctions regime able to change Russia’s attitude towards Ukraine to a peaceful one?; Are the sanctions a deterrent for Russia?

According to him, the answer is no to both questions.

“Sanctions work when they are very tough,” he told the Krynica Forum, noting that the restrictive measures currently cost Russia half per cent of its annual GDP. “If we want to make them more efficient, Russia will have to lose 1.5 per cent GDP,” he argued, giving the examples of Russia’s expulsion from the SWIFT financial mechanism or more sanctions on Russian oil.

Touching the currently evolving integration framework between Belarus and Russia, which observers say might result in a union state between the two countries, Mr Sivitski said it was most likely a test to gauge Western reactions. “Maybe it is time for the West to use the sanctions more efficiently and Belarus would be interesting [from this viewpoint],” he added.

“The sanctions regime was too weak,” said Nikolaus von Twickel, a German journalist who took part in the OSCE’s monitoring missions in Donbas. However, he claimed that sectoral sanctions did have “some” effect, noting that Russia’s Sberbank refused to open offices in Crimea. “We have to do something on the economic side – this is currently in debate and not being actively discussed in Western Europe,” he continued.

In light of no progress being made neither in the withdrawal of occupying forces or of Russia’s implementation of the Minsk agreements, former Ukrainian MP and chairman of the foreign affairs committee of the Ukrainian parliament Hannah Hopko called for more sanctions from both the US and the EU, highlighting that they are often not synchronised. “The Magnitsky Act should be extended to EU countries,” she suggested, pointing to US legislation that sanctions human rights violators and bans them from entering the United States.

She also noted that Viktor Medvedchuk, a pro-Russian Ukrainian MP, who is a close confidant of Vladimir Putin, was under US sanctions, but not under European ones.

“Don’t trade with principles, don’t push Ukraine for compromise,” she told those Western European states considering to make concessions towards Russia, noting that Ukraine, with the biggest army in Europe, makes a significant contribution to the defence of the EU.

Investing in the Macedonian economy
What should emerging Europe expect from the new EU parliament and commission?
Comment