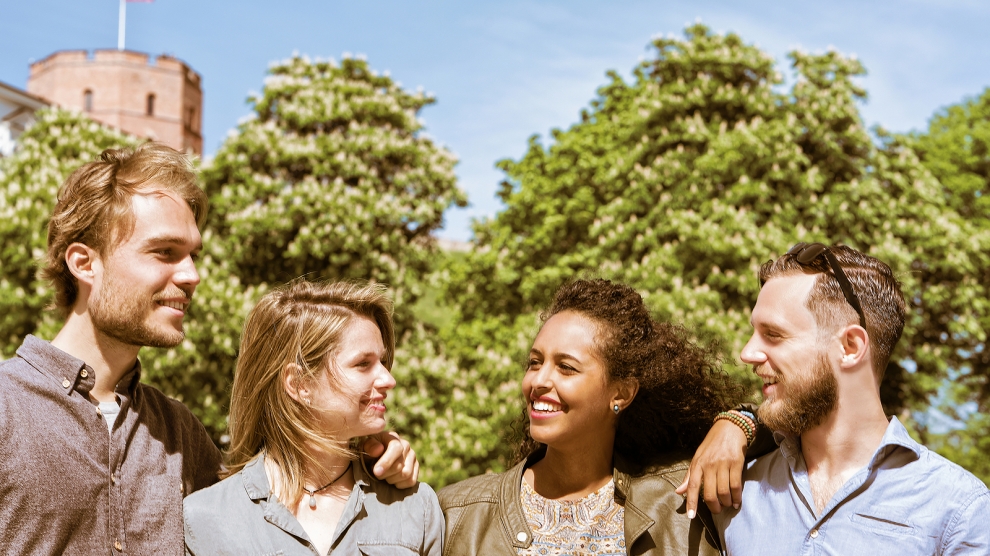 “Based on that analysis Vilnius ticked all the boxes in relation to our requirements. We had to make sure we had a pool of talent that was experienced in transformation programmes, had banking knowledge and a good level of English. I very quickly interviewed about 20 people and from those we had no problem shortlisting about 15 of them. This is a very high success rate,” he tells Emerging Europe.

Dub Landgrebe is vice president and worldwide client care at Bazaarvoice, as well as managing director at Bazaarvoice Lithuania. The US-headquartered global business runs the ratings and reviews functionality for 5,700 brand and retail sites – and therefore serves up more page views per day than almost any other service provider after Google and Facebook.

“We ultimately selected Vilnius because of the high-calibre talent availability. The impressive work ethic, the drive for professional development and the ease of communication between Lithuania and Bazaarvoice US played a large part in the decision,” he adds.

In the initial four to six months, Bazaarvoice plans on hiring 70-80 employees. Going forward, the new office is to house a Global Client Services Centre, providing technical support services to a client base of global retailers and brands. It will also manage half of the company’s new client implementations. The company is also testing out a model allowing key finance and HR teams with global responsibility to be co-located in its Vilnius service centre.

When Barclays opened its centre in 2009, they projected a team of 170. Now, with 1,150 employees, Barclays Group Operations Centre, which is one of the four largest in the country’s global business services sector (GBS) — offers a diverse range of services worldwide, from developing IT systems and infrastructure, to managing IT projects, ensuring security for Barclays’ banking systems, solving IT incidents, and developing new mobile apps and other business functions. Barclays’ examples, as well as other brands such as Nasdaq, Western Union, Danske Bank, WIX, Uber, SEB, Swedbank and Telia, prove the growth of the entire GBS sector in the country.

“The industry grew by 17 per cent in 2017 alone. It currently consists of 70 different multi-functional centres and approximately 15,500 field experts. We are really proud that the sector is very diverse both in terms of companies and the workforce itself. For example, 54 per cent of all specialists in the GBS industry are women. But what is more important, more than a third of all general managers in the industry are women,” says Laisvis Makulis, head of the business services team at Invest Lithuania.

There is a clear a shift to high-end operations and robotics. More than two-thirds of the centres embrace digital transformation and are engaged with robotic process automation (RPA) activities, while almost 50 per cent develop their RPA solutions in-house. The industry is so focused on robotics, that 2.3 per cent of the total GBS workforce consists of robots. Not only robotics, but also advanced finance, consulting, analytics, IT, big data, and cybersecurity operations are carried out,” he adds.

Lithuania’s business service sector is centred around the Vilnius-Kaunas hub. Located just one hour’s drive apart the two cities have a combined population of 1.4 million and a pool of over 100,000 students. According to the Organisation for Economic Co-operation and Development (OECD), Lithuania is ranked first in Europe and fourth globally for the number of people with tertiary education. The country’s 35 universities and colleges have strong positions in both science, technology, engineering and mathematics (STEM) and the humanities. The Lithuanian business services sector remains highly multilingual with 43 per cent of all centres using five or more foreign languages. But for a country with a population the size of Toronto in Canada (2.8 million), is access to talent sustainable long term?

“I have been wondering about the sustainability of talent in Lithuania for the last five years and within that time more and more companies came in and everybody who did so is happy with the talent pool,” Elias van Herwaarden, EMEA service leader, global location strategies at Deloitte, tells Emerging Europe.

“The talent pool is very good in capability and very good in price-performance ratio but size is limited,” admits Tom Bangemann, senior VP, business transformation at the Hackett Group. “More challenging are the sought-after capabilities that are in limited supply — relative to demand — for example tech knowledge, analytics, people and management skills,” he says.

Catalyst Development’s Mr Coote believes that scalability will not be an issue for his organisation.

“If I had a project where I needed to mobilise 10, 20 or even 30 people, I am confident that I would be able to do that very quickly within probably less than two months, whereas in the UK or Ireland that turnaround would be at least three months and it would probably be quite expensive using local agencies. And the overall cost is about two-thirds less,” he says.

Anurag Srivastava, vice president at Everest Group says that Lithuania is not a location where you would set up a 2,000-5,000 employee centre to support contact centre or IT-Infrastructure or transactional business process work.

“It is rather a location where you’d support more specialised profile – e.g, a centre of excellence (CoE) on robotic process automation (RPA) or digital technology, or if you wanted niche skills on the banking side or complex applications development work; this may mean that the scale you support is smaller, even around 500 or 700 employees. The market has the capacity to absorb more growth and we believe that as much as it now supports the Nordic market, we see room for expansion for a wider European market,” he adds.

“The country did prove the naysayers wrong, as we already have four centres that crossed the 1000 FTEs threshold — Western Union, Danske Bank, SEB, Barclays — and there are several more nearing that same threshold,” Mr Makulis says.

“Very large new centres with over 1,000 full-time employees (FTEs) could produce a shortage, especially if growing fast. I foresee the next 20 centres being OK without having too many limitations in setting up, after that the general ratio of centre FTEs/population or FTEs/available labour pool will become more difficult,” the Hackett Group’s Mr Bangemann says.

For him the key solutions are making relevant skills available in larger demand and bringing more talent from outside Lithuania. Invest Lithuania’s Mr Makulis believes that the Lithuanian hub still has plenty of room to grow, compared to places like Prague, Wroclaw and Krakow.

What’s on the horizon

Catalyst Development’s Mr Coote confirms the interest in repatriation. “About 20 per cent of the team is Lithuanian returning from other countries,” he says.

According to the Lithuanian Department of Statistics, between January and August, almost 28,800 Lithuanians left the country. At the same time, almost 26,800 individuals came to live in Lithuania, of whom two-thirds were returning Lithuanian citizens.

Repatriates account for 10 per cent of those employed in GBS in Lithuania, while four per cent of employees are foreign nationals. For example, Danske Bank currently employs over 200 Lithuanian repatriates, and it seems interest in returning to Lithuania is definitely on the up.

At the same time, salaries in the sector are growing at a slower rate than the average wages in Lithuania. In 2017, salaries at GBS centres grew slightly more than six per cent, and it is estimated that this year salaries will grow 7.5 per cent for IT specialists and 5.3 per cent for other staff.

“If the country can reverse the demographics, encourage even more nationals to return plus keep a slower pace of increase in salaries, they are bound to attract even more investment from the Nordics, US and UK markets, all of which are heavy investors currently,” says Tom Quigley, CEO of the London-based Emerging Europe Alliance for Business Services, Innovation and Technology.