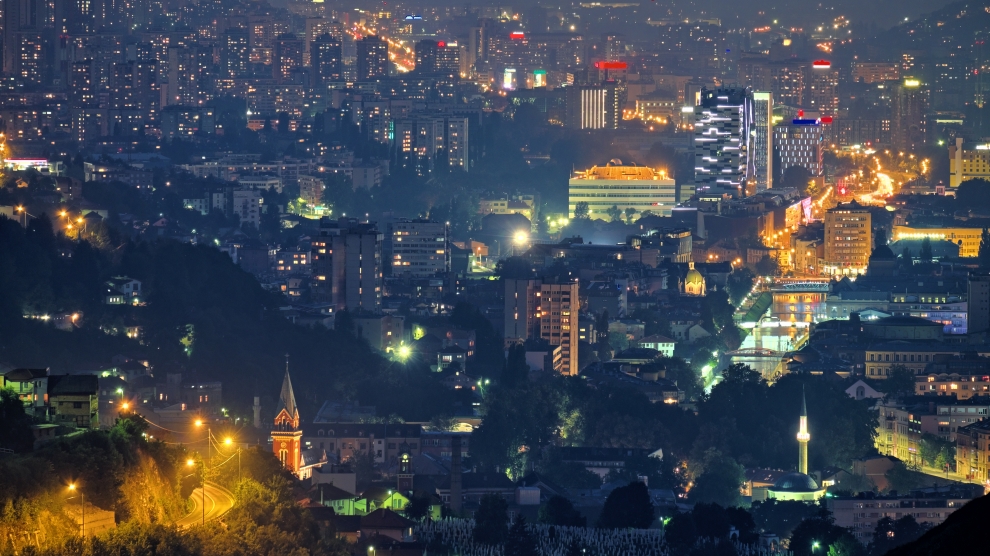 Emanuel Salinas, World Bank country manager for Bosnia and Herzegovina (BiH) and Montenegro, and Ian Brown, head of the European Bank for Reconstruction and Development’s (EBRD) office in BiH, speak to Andrew Wrobel about the country’s challenges and opportunities.

In 2018, the economy of Bosnia and Herzegovina grew by three per cent, according to Focus Economics.

“Our current projection is that real GDP growth will be 3.5 per cent in 2019, with public investment being an important driver of growth,” says the EBRD’s Mr Brown. “However, risks are tilted to the downside in light of possible delays in forming new governments, as well as a potential slowdown in the wider European economy.”

The World Bank’s forecast is around 3.4 per cent. “From the outset this doesn’t seem to be a bad proportion, but we have two main concerns in this regard,” Mr Salinas tells Emerging Europe. “The first that economic growth has been to a large extent driven by construction, consumption and public sector spending. These are not sustainable sources of growth and they do not necessarily create the more and better jobs that the people in BiH aspire to have, especially the youth.”

The World Bank says that the key economic challenge for Bosnia and Herzegovina is the imbalance of its economic model: public policies and incentives are skewed towards the public rather than the private sector, consumption rather than investment, and imports rather than exports.

“These ‘rebalancings’ are critical for the country going forward,” says the World Bank’s Mr Salinas. “Having an economy that is inward looking, based on consumption and where the government is one of the largest sources of jobs is not sustainable and will likely not be the basis for a modern and competitive BIH.”

The EBRD agrees with the analysis. “Conditions for doing business in Bosnia remain difficult, as shown by the country’s persistently low ranking in the World Bank’s annual Doing Business report. Private investment will be difficult to mobilise unless there are substantial improvements to the business environment,” Mr Brown says.

Mr Salinas see all three shifts are as equally challenging and they will require strong commitment and leadership by BIH’s authorities. BiH needs to unleash the potential of the private sector while at the same time reducing the footprint of the very large and inefficient public sector. There needs to be a shift towards a business environment that supports both vibrant small- and medium-sized enterprises and the growth of larger companies. Despite improvements, BiH’s private sector still struggles with a non-conducive business environment, high labour taxes and inflexible labour market policies,” he adds.

The World Bank estimates that at this rate of growth, it would take BIH more than 50 years to reach the level of livelihood that we observe now in EU.

“Altogether, this means that economic growth is not sufficiently high and is not necessarily sustainable and inclusive. We are firmly convinced that BIH has an enormous untapped potential for growth. Unleashing that potential will require concerted action from the government to address the obstacles that are hampering the country’s development,” Mr Salinas adds.

“We have long argued that Bosnia’s prosperity is being held back by the complex internal political structure and the slow pace of reforms, but external conditions are also important, given Bosnia’s growing integration into the wider regional and global economy,” Mr Brown says.

In the World Bank’s Doing Business Report 2019, Bosnia and Herzegovina is ranked 89th, three notches lower than in 2018.

“To be fair, this doesn’t necessarily mean that the business environment has become more challenging,” Mr Salinas explains. “What is means is that during these years governments in many countries have understood that they simply cannot afford to have a bad business environment and have taken decisive actions to address the obstacles that companies face. Unfortunately, that has not been the case in BIH. This is bad as it sends a very negative signal to the local in foreign investors as per the commitment of the authorities to make BIH a good place to invest.”

For the EBRD’s Mr Brown, the main priority is to reduce the complex burden imposed on companies and make it easier to do business. “Progress on privatisation would also help — in the Federation there has been much talk on trying to find buyers for some of the larger SOEs, but very little action,” he says.

According to the World Bank much can be done by authorities to improve the economic performance of the country and strengthen resilience to global shocks.

“This includes moving ahead with the reforms that have been identified as necessary to enhance macroeconomic sustainability. It also includes taking decisive action to improve the business environment, which is critical to enable new domestic firms to be created, existing firms to grow, and foreign investors to consider BiH as a desirable investment destination,” Mr Salinas says.

“The people of BiH are the most valuable resource that the country has, but unfortunately shortcomings in health and education mean that people in BiH, on average, will only get to reach 60 per cent of their productive potential over their lifetime. Losing 40 per cent of the productivity of the people in BiH is a major loss for the whole country and its potential to grow and is just one of the many factors that are fully within the hands of the government to resolve. We are terribly sad to see so many talented people leave the country in search of the opportunities that they cannot find here. We hope that the new government will awake to this challenge and take decisive actions to make it easier to do business in BiH,” Mr Salinas adds.

And, for the EBRD, BiH’s economy has plenty of potential to develop in areas such as energy, agribusiness and tourism, to name a few sectors. “Then improving internal and cross-border infrastructure, to which the EBRD is contributing in a major way, is helping to integrate Bosnia further into regional and global markets and supply chains,” Mr Brown says.

“As a small, open economy, BiH has many opportunities – its proximity to the EU; a well-educated labour force, and export potential in both goods and services. Once the distortions to private sector development are removed, BiH has export opportunities in a number of sectors, including wood processing, metal and automotive industries, tourism and information technologies. Agriculture is also a sector with strong potential, but the key will be moving from small-scale and subsistence agriculture to a sector that can be competitive in an international arena,” Mr Salinas tells Emerging Europe.

As of now, a very large proportion of BIH’s exports are raw materials and low-added value manufacturing. Many companies have outdated technologies and production processes, which limits their productivity and competitiveness. This also means that they cannot be the source of the better-paid jobs that people aspire to have. Going forward it will be important to put in place decisive actions to to support the development of private enterprises.

An EU accession could speed up reforms. Following the general elections in October 2018, Bosnia and Herzegovina now needs to submit swiftly all the replies to the questionnaire for the European Commission in order to finalise its opinion on the country’s EU membership application.

“We are convinced that EU accession is a critical path for the development of BiH,” says the World Bank’s Mr Salinas. “Time and time again we have seen that EU membership helps countries to converge faster to higher levels of income per capita both during accession and after becoming a member of the EU. Likewise, we expect that for BiH, the EU accession will help economic growth, including by creating urgency on implementation of the reforms needed.”

In the meantime, both the World Bank and the EBRD continue their operations in Bosnia and Herzegovina. The first organisation has invested two billion euros in more than 120 projects, the latter —  almost 2.3 billion euros in 156 projects.

“At the present time we are providing financing of around 446 million euro for projects that include improving roads and railways; reducing the risk of floods; improving irrigation; protecting and using forestry responsibly; supporting employment; refurbishing schools and hospitals; improving water supply and sanitation; improving management of solid waste; to name just a few areas,” Mr Salinas says.

“The EBRD will continue to invest in major infrastructure projects, including the key Corridor Vc motorway project that links BiH with EU markets,” Mr Brown says. “In February last year we signed an MoU with the authorities in BiH with a plan to invest up to EUR 700 million over the next several years in this project, and this plan is well underway to be realised.”

In May 2019, the EBRD is organising its Annual Meeting in BiH’s capital, Sarajevo.

“We see the Annual Meeting not only as an event for Bosnia and Herzegovina, but also as an event that can showcase the whole interconnected Western Balkans region. EBRD is working intensively to promote regional economic integration in the Western Balkans, and having our Annual Meeting in Sarajevo is an great way both to show the progress made in this, and to promote the region as an investment destination,” Mr Browns concludes.

The search for talent: Bosnia’s ICT scene
Embracing the seeds of change in Bosnia and Herzegovina
Comment