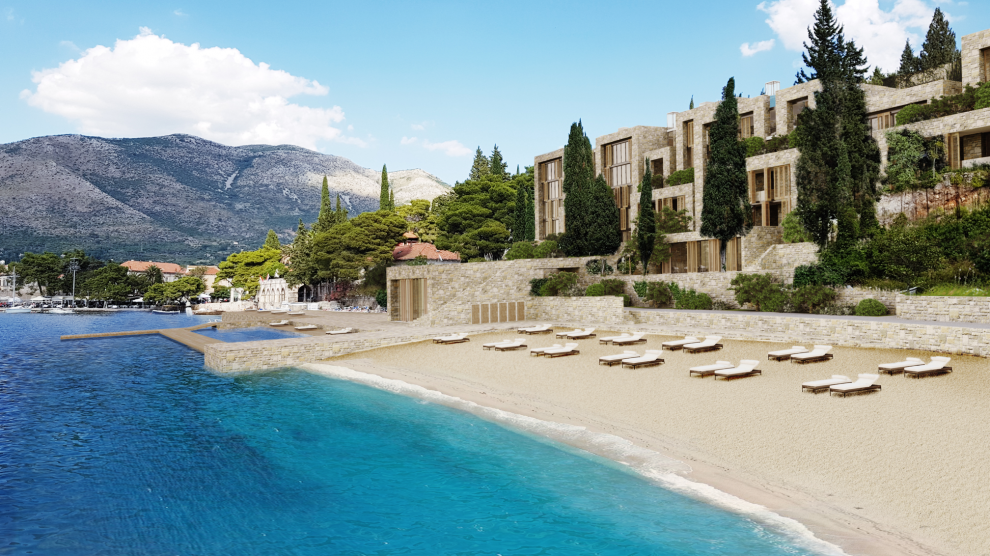 Investor Petros Stathis shares his vision for the resurgence of the Balkans and lessons from the redevelopment of the iconic Sveti Stefan resort in Montenegro, as he prepares for his latest investment in neighbouring Croatia.

“From the moment I set foot on Montenegrin soil, this country has felt like home,” Petros Stathis tells Emerging Europe.

For those that haven’t visited the country, just spending five minutes listening to Mr Stathis conjures vivid images of the sparkling Adriatic waters, dramatic mountainous scenery and medieval fortress towns that have tourists flocking to the country in increasing numbers each year.

Originally from Greece, his passion for his adopted home of Montenegro is hard not to find infectious.

With a track record in hospitality and real estate, in 2008 Stathis set his sights on the burgeoning Montenegrin tourism industry and took on his most ambitious project to date – restoring the iconic Sveti Stefan resort. Since then his business interests in the country have expanded to include banking, media and the food industries.

Despite the breadth of his business activities, Mr Stathis firmly believes in a common set of principles by which any investor in a growing economy such as Montenegro should be guided to ensure their businesses are sustainable and socially responsible.

“Protecting the heritage and environment of this beautiful country and working closely with local communities has always been of the utmost importance to me,” says Mr Stathis. “An economy in this stage of growth must be nurtured carefully to ensure continued success for the country and its people.”

The Sveti Stefan resort, built on the existing foundation of a 16th-century village, was restored and re-opened in 2011 by Stathis together with other investors under the resort management of Aman Group.

Once a favourite of the original ‘jet set’ in the 1950s, the regeneration of the hotel was widely considered the impetus for Montenegro’s revival in the luxury tourism market.

“With Sveti Stefan we set out to reignite a star that had faded but was once the leading light of Montenegro’s tourism industry,” says Stathis. “By focusing on perfecting every tiny detail we have created one of the world’s most premium hotel experiences, showing other potential investors what can be achieved.”

Since the re-opening of Sveti Stefan, the luxury tourism market in Montenegro has grown exponentially, earning comparisons with Monaco and the French Riviera. The World Travel and Tourism Council has predicted that Montenegro will receive 10 billion euros in investment over the next decade. By 2021, 36 per cent, or 1.9 billion euros, of GDP will come from the tourism economy, rising from 17 per cent in 2017.

Projects such as Porto Montenegro have followed Sveti Stefan’s lead, offering a yacht and superyacht marina with 850 berths, a five-star hotel and shopping village, luxury villas, a helipad and a museum. The estimated investment to date in Porto Montenegro alone amounts to over 450 million euros, providing a huge stimulus for the local economy.

“I’m a firm believer that a single high-profile, high-quality project such as Aman Sveti Stefan can lead by example and set the standard for the growth of an entire industry to the benefit of the country as a whole,” says Stathis.

“Montenegro is a tiny country currently receiving a huge amount of attention on the global stage,” says Mr Stathis. “This type of situation calls for careful management to avoid exploiting and destroying the very reason foreigners want to visit in the first place.”

That reason, of course, is Montenegro’s wild and diverse natural beauty. The country has two World Heritage sites, one biosphere reserve and four national parks – and the government is keenly aware it must nurture and protect the country’s ecology. As such, a commitment to the conservation of such rich natural resources has been incorporated in the constitution of Montenegro since 1991.

However, Stathis believes that business owners should also take the lead on sustainability issues, rather than relying solely on the government and other authorities. The Aman Group is known for environmental, material and social sustainability, not just at Sveti Stefan but at all its hotels across the world.

Construction of Aman Sveti Stefan was consistent with Montenegro’s low-density tourism development strategy rather than mass tourism, and is complementary to the World Bank’s on-going Sustainable Tourism Project. Sveti Stefan island is a protected monument of culture of II category in the country, and the refurbishment work fully complied with the relevant regulatory requirements and was conducted under the supervision of the Institute for Cultural Monuments Protection.

“Consideration for the stunning environment that we are lucky enough to live and work in is enshrined in everything I do,” he tells me. “The precise reason Aman Sveti Stefan is so iconic is because it preserves the exact aesthetics of the original medieval island it inhabits, allowing guests to reconnect with the purity of nature and the area’s rich cultural history. Everything from the way the hotel was constructed to its energy supply and the seasonal menus in the restaurants is hyper-focused on sustainability.”

“As a foreign investor, the successful completion of any project rests almost entirely on gaining the support of the local authorities and ensuring it benefits the local community,” says Stathis.

Due to its high visibility, Sveti Stefan’s public-private partnership structure has set an example for further tourism privatisations in the region. Stathis and his team worked closely with the local government throughout the project, and its impact is widely considered to have reached beyond Montenegro’s borders and set quality standards for the tourism industry in the Southern and Eastern Mediterranean region.

Aman’s skills development programme has provided training for locals in the area surrounding Sveti Stefan, creating a multitude of jobs and providing the basis for future careers in hospitality-related and managerial positions.

“Resorts like Sveti Stefan can provide the basis for huge economic growth in the local areas in which they’re based,” says Stathis. “It’s absolutely critical that business owners ensure their success goes hand-in-hand with the interests of the local community, and a close partnership is maintained with all the relevant local bodies.”

He adds: “There’s no secret recipe for success when doing business in a country like Montenegro. Each project presents its own unique challenges, but staying true to the principles I value provides me with the guidance and reassurance that my investments benefit not only my companies but the communities in which they operate.”

Following the success of the Aman Sveti Stefan, work to build a new, luxurious hotel in Croatia will commence at the end of the year, after a break in the work. The 50 million euros Aman Cavtat at Dubrovnik on the beautiful Croatian coast will represent the very pinnacle of refinement.

The resort is expected to set a new standard for excellence in hotel design and will be built on the site of the former Hotel Macedonia and will include 43 luxurious suites with seven supreme suites.

The design represents a synthesis of architectural styles, working with the grandeur of the landscape, built with local materials. The resort will be transformed into an observatory, framing the city of Dubrovnik, with the terrace of each suite providing a unique view of Cavtat’s bay and of the Adriatic coastline.

“Our objective for Croatia is the same as every other country where we have built and invested, to create the very best and to leave a lasting, positive legacy the country can be proud of.

“This project is about building the most beautiful resort in Croatia, sympathetically, in harmony with the environment and local infrastructure.

“It is Croatia’s time to shine brighter on the world stage and we want to play a key part in that story. It has been a herculean effort so far and we have been lucky to have had the positive support of so many parties,” concludes Mr Stathis.