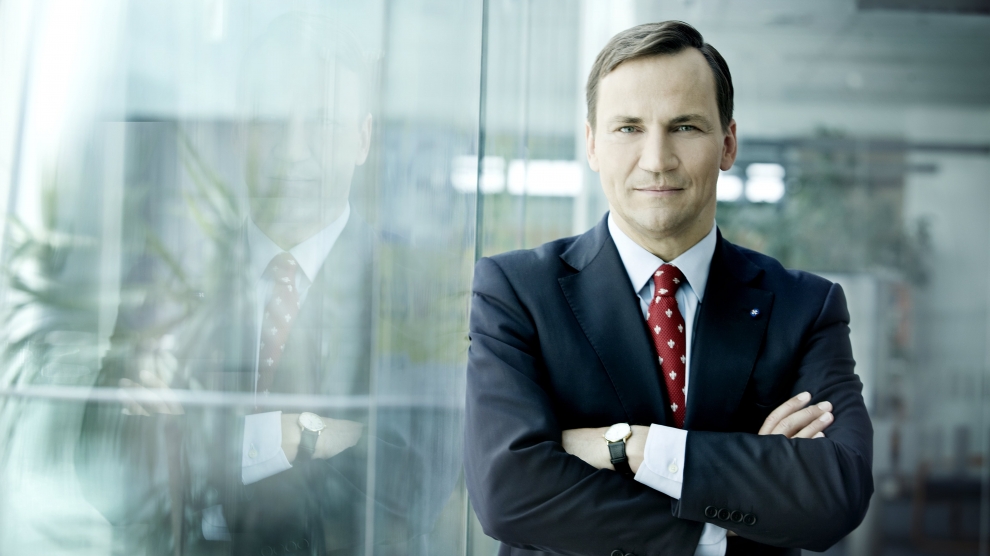 On a cold and dark Saturday afternoon, Mr Sikorski and I sat down for a coffee in Warsaw on the eve of Poland’s celebrations to mark 100 years of independence. The city was quiet, as if people were preparing for the worst. The next day a controversial march led by far-right groups would take place in the city centre: a similar march the previous year ended in violence.

Mr Sikorski’s new book, Polska może być lepsza (Poland could be better), went on sale in Poland in mid-October. In it, he discusses his life as the Polish foreign minister.

“On one level the book is a straight history of my seven years as a minister, on another a thank you to those that I worked with,” he tells me. “It’s also a legacy for my successors, so they learn from my mistakes, and it is also partly a political manifesto, because I think Poland is not using the opportunities that are now presenting themselves, particular those offered by the EU. I think that the anti-EU turn Polish foreign policy has taken is misguided.”

Unfortunately, Mr Sikorski’s book will not be available in English. “I wrote it with a Polish reader in mind. I would have written it differently for a foreign public,” he says.

Sikorski was encouraged by Poland’s recent local elections, which for the first time in years suggested that support for the ruling Law and Justice party (PiS) is no longer as strong as it was.

“The regional elections were cheering. They demonstrated that the ruling party, despite its claims, does not command the majority. It commands a third of the electorate, those that are traditionalists, religious, nationalistic and wedded to conspiracy theories,” he says, adding that two-thirds of the electorate are more open and pro-EU.

“We are entering the electoral cycle on a positive footing. I was particularly happy with the fact that the local elections confirmed my intuition that the opinion polls were hugely skewed towards the ruling party. They were shocked that they received 5-10 per cent fewer votes than they had anticipated.” He feels that parts of the electorate were afraid to admit that they do not support PiS.

While Sikorski believes that change is possible at next year’s general election, he warns that we should not exclude political incompetence from the current opposition.

“I mean they [PiS] only won by fluke, by the incompetence of the left in particular who went into the last elections as four different groups, and not a single one passed the parliamentary threshold. I hope they have learned their lessons.”

Much of the support that PiS can count on comes partly from its tough anti-immigration stance, something which Mr Sikorski believes is hypocritical.

“We are a country of migrants, and have been for 300 years,” he says. “Just about every generation has produced a wave of people who were given asylum somewhere else, including me: I was a refugee in the UK. So for our leaders to be using this kind of anti-foreigner sentiment, particularly against people fleeing war in Syria, is unbecoming a Pole. It is un-Polish. In addition to that our church is no longer Catholic, it is a nationalist sect. We have senior clergymen praying for the Pope to die.”

Once a British citizen, Sikorski had to hand in his UK passport when he became Poland’s defence minister. He retains strong views regarding Britain, however, not least Brexit, which he strongly opposes.

“It’s a national folly,” he says. “It’s the last gasp of English exceptionalism and of English arrogance, because it’s a product of misinformation and lack of understanding of how the EU actually works. I mean the leave campaign targeted the Indian community and the Commonwealth community, which have nothing to do with the EU.”

He does accept, however, that the huge numbers of Poles who went to live and work in the UK after Poland joined the EU did play a role in the outcome of the Brexit vote.

“It really was a friendly decision by Tony Blair not to exercise the seven-year derogation and to open the British labour market from the day of our accession to the EU. But this meant that the Polish wave did not spread equally across the EU, as everybody and their brother went directly to Britain. This had huge benefits for Britain, but I also think it affected a kind of panic in Britain about identity and the island being full, which I believed contributed in part to the Brexit result.”

Only now, two years on from the vote, does he feel that the English establishment is finally starting to understand the ramifications of Brexit. The public, however, is still lagging a little behind.

“Brexit is driven by a juvenile feeling rather than mature understanding of what the stakes are,” he says, warning that if Poland continues with its current rhetoric it too could be headed for an EU exit:

“I have been saying this for months, that the ruling party is in danger of repeating the British mistake, namely leaving the EU by accident. Attacking the EU to score internal politics comes at a huge cost, as the British government has found out.”

If there is to be any silver lining to Brexit at all it will be that lessons can be learned.

“You play with these nationalist feelings at your peril, for the public may just believe in your propaganda,” says Mr Sikorski.

Sikorski was one of the founders of the Eastern Partnership, a joint policy initiative which aims to deepen and strengthen relations between the EU, its member states and its six eastern neighbours: Armenia, Azerbaijan, Belarus, Georgia, Moldova and Ukraine.

“This was the first big political project that Poland persuaded the whole EU to adopt,” he says proudly.

“The EU has already spent billions of euros on the Eastern Partnership, managing borders, investing in infrastructure, providing aid for small businesses, preparing countries for visa-free travel and for the EU free trade zone as well as offering advice with legislation. Thanks to the success of the programme’s first decade, Ukraine will now be more closely integrated with the EU than Britain.”

Keeping Poland integrated is also going to be a challenge, at least if there is no change in government. As far as Mr Sikorski is concerned, the current government is of the belief that by opposing the EU it can build better ties with the US. This, he feels, is a mistake:

“I am convinced that it is the other way around. Poland will be more beneficial to the US if it is an influential member of the EU, not if it is a Europhobic ideological ally of the US president. Poland needs to re-establish the EU credentials which have been destroyed by the current government.”

Mr Sikorski could be one of the key individuals driving that process. The main Polish opposition party, Civic Platform, has been discussing the possibility of his return to politics, as a candidate for election to the European Parliament next year. While Mr Sikorski is still toying with the idea, he nevertheless believes that change is certain, and that PiS is on the way out.