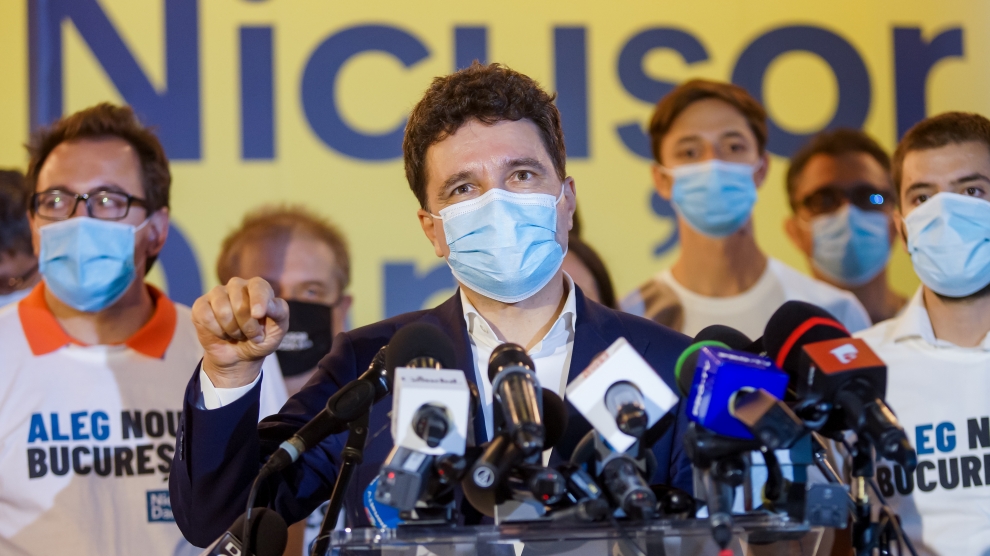 Local elections are rarely as important as those which took place in Romania on September 27, just two months before the country votes for a new parliament.

The headlines have been dominated by the victory in Bucharest of mathematician Nicușor Dan, set to become the new mayor of the Romanian capital, but across the country a number of mayors and leaders of county councils who once thought that they had jobs for life have found themselves out of work. (It is therefore ironic that Ion Aliman, erstwhile mayor of Deveselu – the location of a NATO missile base – was re-elected with an overwhelming majority despite having died of Covid-19 two weeks ago).

The election has therefore left Romania with a much-changed political landscape, and results suggest that the ruling National Liberal party (PNL) will comfortably win the parliamentary vote in early December. Major strides were also made by the upstart Save Romania Union (USR), which recovered from a setback in last year’s presidential election (in which its leader, Dan Barna, performed poorly). The PNL and USR now look odds-on to form Romania’s next government. The Social Democrats (PSD), currently the largest party in parliament, must prepare for at least four years in the political wilderness.

In Romania’s capital, incumbent mayor Gabriela Firea (PSD) paid for a disastrous four years in office and was heavily defeated by the independent Nicușor Dan, a mathematics professor and civic campaigner who has for almost 20 years battled with various Bucharest administrations over the illegal demolition of historic buildings. Backed by the PNL and the USR – a party he founded before leaving in a row over a gay rights referendum – Mr Dan won 42 per cent of the vote to Mrs Firea’s 36 per cent. A former mayor and Romanian president, Traian Băsescu, was a distant third.

Dan has a difficult job ahead, although he will be helped by the fact that the USR and PNL will be able to offer him a majority on the city council. Bucharest has fallen behind other cities in Romania in terms of infrastructure development, and hundreds of thousands of the capital’s residents who rely on a centralised heating and hot water supply regularly have to go without both. Public transport is poor and underfunded, and traffic congestion is the worst in Europe outside Russia. Dan has promised to invest in public transport, to restore and expand green spaces and to make the city more pedestrian-friendly. Most importantly, however, he has vowed to bring full transparency to the way in which the city is run: shortly after it was announced he had won he said that his first task would be to commission a full audit of City Hall.

Bucharest City Council is believed to employ as many as 45,000 people – more than the European Union – but nobody really knows exactly how many people, nor what many of them actually do.

Perhaps the biggest surprise of the election was the overwhelming victory of Dominic Fritz, a German citizen, in Romania’s most western city, Timișoara. Fritz, of the USR, defeated incumbent mayor Nicolae Robu (PNL) by almost 20 percentage points. Long a beacon of progress – the city was the starting point of Romania’s 1989 revolution – Timișoara has stagnated in recent years under the idiosyncratic leadership of Mr Robu, who, amongst other things, had a penchant for organising football matches in which he would score several goals. The city will be a European Capital of Culture in 2023, and its residents will be hoping that Mr Fritz can effectively mobilise European funding in the same way that another German, Klaus Iohannis, did in Sibiu in 2007. So successful was Mr Iohannis that he went on to become Romania’s president.

There was more international success for the USR in Bucharest’s Sector 1 – the wealthiest in the city – where a Frenchwoman, Clotilde Armand (who unlike Mr Fritz also holds a Romanian passport), defeated the PSD’s Dan Tudorache.

This is not the end of the PSD, but the wilderness awaits

It was a miserable election for the PSD. Already reeling from the conviction and imprisonment on corruption charges last year of its Svengali-like leader Liviu Dragnea, the PSD lost not only the flagship capital, but was defeated in a number of erstwhile strongholds. Constanța, Romania’s largest port, fell to the PNL, while in Vrancea, in the east of the country, Marian Oprișan – who for 20 years has run the county as a personal fiefdom – was dethroned as leader of the county council.

It is far too early however to suggest that the PSD is finished as a political force. Its vote on most county councils – the best gauge of political support in Romania’s local elections – held up relatively well, and it is still overwhelmingly the largest party in Romania’s rural areas.

What does look certain is that it will have no chance whatsoever of taking office after December’s parliamentary election. The PNL will be the country’s largest party, although the USR’s strong showing means that it is likely to give the PNL a run for its money. As long as they do not fall out between now and December, it is the PNL and USR that will form Romania’s next government.

The USR must represent more than a protest vote

The USR has been declared by most Romanian political analysts as the night’s biggest winner, and not without reason. Founded in 2016, its steady, upwards trajectory – interrupted by the disappointing performance of Dan Barna in last year’s presidential vote – has been restored, and its position as a genuine political force solidified. Besides its headline-grabbing victories in Bucharest and Timișoara, its candidates for mayor also won in the Moldovan city of Bacău and the Transylvanian cities of Alba Iulia and Brașov. However, while the party also made inroads for the first time in rural areas, winning five village councils, it remains a predominantly urban party – a severe handicap in national elections given that half of Romania still lives in the countryside.

What the USR has managed to achieve however is to realign Romanian politics in a way no other party has done since 1989. Its broadly progressive agenda has forced the PNL to ditch some (although not all) of its more nationalist and populist rhetoric, while its activist-led grass roots has demonstrated that political start-ups can be effective in Romania if they work hard enough.

What continues to hold the party back however is a lack of clear policy in certain areas (its biggest attraction – for young voters especially – is still the fact that it is not the PSD or the PNL), while eventually – perhaps sooner rather than later – its ecologist, green wing will clash with its more pro-business elements. It also needs a new leader who can match the dynamism of its grass roots.

These are concerns for another day, however. For now, the USR represents Romania’s best chance for real change.

In Romania, the dead can win elections

Jokes about dead people voting have long been a feature of Romanian elections, particularly in rural areas where stuffed ballot boxes and turnouts over 100 per cent were for many years a staple of voting day. Deveselu, a small town in the south of Romania, yesterday went one step further.

Best known until last night as being the site of a ballistic missile shield that NATO sees as vital to defending Europe from long-range missiles fired by rogue states, it is now making headlines as a town that elected a dead man as mayor.

Incumbent mayor Ion Aliman received 1,020 out of a total of 1,600 votes cast in yesterday’s election, despite having died on September 17 from Covid-19: his death came too late to change the ballot papers, which had already been printed and distributed. When the result was announced, hundreds of people gathered at his grave. The election will now be re-run.

It is not the first time that the residents of a Romanian town have elected a dead man as their mayor. In 2008, the late Neculai Ivascu, who had run the central Romanian town of Voinești for 18 years, was re-elected to the post. In that particular case, Ivascu died from liver disease just after voting began on polling day, but still won the election by 23 votes.