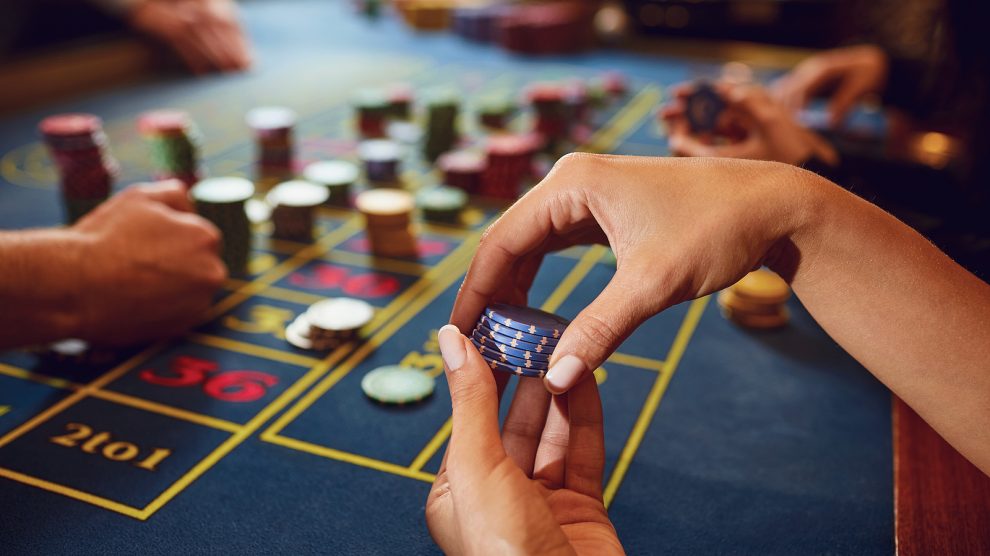 Gambling was illegal in Ukraine for 11 years, from 2009-20. A year on from the end of its prohibition, it’s once again becoming big business.

For the past 12 months, advertisements for the sports betting company Parimatch have been ubiquitous in Ukraine.

The company’s black and yellow-tinged branding, depicting stars such as boxer Mike Tyson and mixed martial artist Conor McGregor have become part of the urban landscape, on billboards, at metro stations, and reaching into people’s homes via television.

Parimatch representatives have been a highly-visible presence at every football game, every boxing match, and just about any sports event which draws an audience.

The Parimatch strategy has two aims. Firstly, to make sure that the public knows gambling is once again legal in Ukraine; and secondly to make the firm synonymous with betting.

Soon, gambling won’t just be limited to sports events: dozens of licenses have been issued for the construction of casinos, and the chairman of the Ukraine Gambling Council, Anton Kuchukidze, says that the country is well positioned to become “the Las Vegas of Eastern Europe”.

“We have the biggest gambling market in all of Central and Eastern Europe,” he adds.

Boris Baum, a member of the commission that oversees gambling legislation and regulation, says that 40 licenses have been issued to 40 different operators since February this year, adding that the Ukrainian government can soon look forward to coining in over 300 million euros annually in taxes.

Gambling was made illegal in Ukraine in 2009 after a fire in a gambling hall in Dnipro killed several people.

However, it continued to exist in various grey or outright illegal forms.

“Lottery” offices continued to operate legally – however, these often shuttered their windows to hide the other kinds of illegal gambling taking place on the premises. Some casinos continued operating clandestinely out of nightclubs: sometimes, it is alleged, paying protection money to police.

Various estimates put the size of Ukraine’s gambling black market during prohibition at one billion US dollars per year. With casinos and gambling halls operating without legal oversight, they often became seedy
institutions, the gamblers themselves often at risk from loan sharks and scammers.

In early 2020, over 900 illegal gambling halls across the country, often disguised as lottery offices, were closed in an effort to crack down illegal gambling. Then, in July, Ukrainian President Volodymyr Zelensky signed legislation legalising gambling after the nine-year hiatus.

Although the move was met by opposition for threatening to “destroy spirituality” in Ukraine – most stringently from a former prime minister, Yulia Tymoshenko, and her Batkivschyna party – many people in the country are excited about the economic opportunities legalised gambling offers.

“First of all, the legalisation of gambling will increase the number of workplaces, because new set ups will be incorporated, new operators will be established,” says Ievgeniia Derbal, chief legal officer at Parimatch Tech. “There will definitely be a significant number of new jobs for people who move to Ukraine to work in this industry.”

Not that the new law is a free-for-all. Gambling will only be permitted in one of three types of location: five star hotels; special recreation sites located outside city limits; and buildings specially designated by the government for gambling.

Derbal believes that this will also precipitate a boom in construction.

“There will be new premises built, especially casinos in five star hotels, to attract tourists from all over the world to come to Ukraine and play in Ukrainian casinos,” she tells Emerging Europe.

This will have a knock-on effect for the restaurant, hotel and tourism sector which are likely to benefit as a result. Several high-end hotels – such as the Fairmont, the Intercontinental and the Premier Palace in Kyiv as well as the Gagarin in Odesa – have already obtained casino licenses.

There is also talk that the iconic headquarters of Ukrposhta, the Ukrainian post office, located on Independence Square in downtown Kyiv, will be sold and converted into a casino.

But the biggest quantitative benefit of the legalisation of gambling is tax revenue, lost when the industry was forced underground.

Casinos in Ukraine will have to pay some of the steepest licensing fees in the world – running up to two million US dollars per year. And while the newly reborn industry is at the moment operating more or less tax free – new fiscal legislation for the gambling sector has yet to be introduced – the potential tax revenues are huge.

Already this year, says Boris Baum, gambling has generated some 41 million US dollars for Ukraine in taxation. However, in the future, Baum projects that the market could reach a value of anywhere from 20-30 billion US dollars per year – 15 per cent of Ukraine’s current GDP.

What’s certain is that having taken the step to once again make gambling legal, Ukraine wants to make the industry both respectable and a key part of the economy.

It is well placed to do so: gambling is highly restricted in neighbouring Russia, with just four special zones – two in the far east, one in the Krasnodar region and one in Kaliningrad (and another planned, ironically, for occupied Crimea) – allowing gambling in a limited capacity.

Successive Ukrainian governments have long made low taxes for most sectors – particularly IT – part of their programmes, but such policies require revenue be raised elsewhere.

Taking a punt on gambling therefore looks like a sound bet. But it will need to make sure that an industry which has a reputation for seediness stays squeaky clean, else the casinos will once again be forced to shutter their doors.