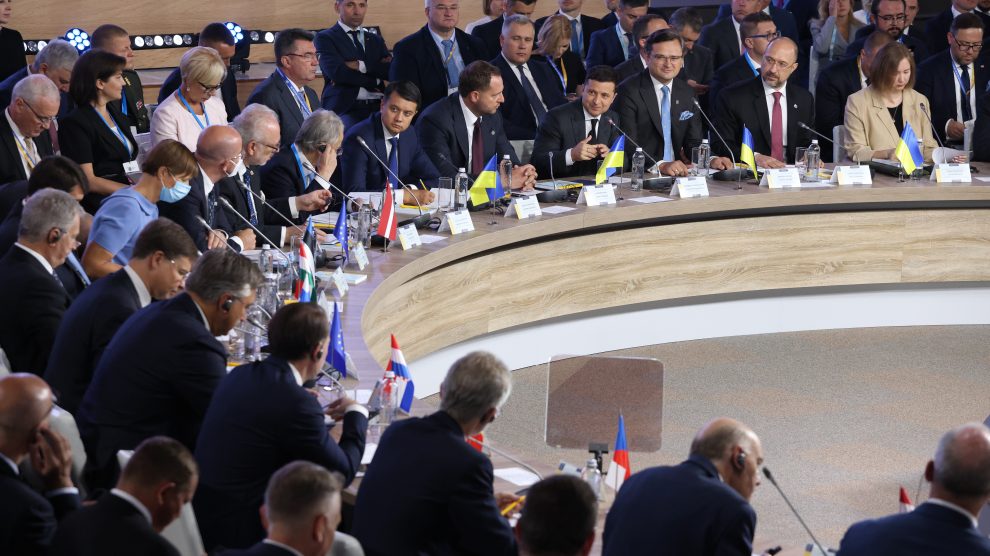 The Crimea Platform – held by Ukraine on the 30th anniversary of the country’s independence – demonstrated that the world has not forgotten about Russia’s illegal occupation of Crimea – but also highlighted the international community’s ongoing inability to do anything about it.

It has been over seven years since the first Russian troops poured out of their bases in Crimea to bloodlessly conquer the entire peninsula.

And yet despite a wave of international condemnation, followed by economic sanctions, Russia looks to be more in control of the peninsula than ever before.

Hundreds of thousands of people have moved from mainland Russia to Crimea since the occupation, replacing similar numbers of people who have fled to other parts of Ukraine.

This year also saw Russia move tens of thousands of troops to its border with Ukraine, escalating tensions further.

This was the climate in which Ukrainian President Volodymr Zelensky opened the first Crimea Platform summit on August 23.

Delegations from 43 countries and numerous international organisations, including the European Union and NATO attended the summit, including heads of state from Greece, Lithuania, Poland, Moldova and Georgia.

The latter two countries both have similar territorial disputes with Russia.

At the summit’s close, a strongly-worded declaration made it clear that all participants do not recognise and continue to condemn the temporary occupation and illegal annexation of Crimea, which, reads the declaration, “constitutes a direct challenge to international security with grave implications for the international legal order that protects the territorial integrity, unity and sovereignty of all states.”

But while the the summit was a strong demonstration of the substantial diplomatic backing on which Ukraine can continue to count, Ukraine’s options for actually regaining control of the peninsula remain limited.

The past seven years have shown that even the extensive sanctions placed on Russia and international firms doing business in Crimea have been ineffective in putting sufficient pressure on the Kremlin. A new approach, it seems, is needed, and the Crimea Platform is, at the very least, a starting point.

“For Zelensky it is crucial to find new ways to establish the long-awaited peace and reintegrate all of the occupied territories,” says Christine Karelska, an analyst at Ukraine Analytica.

“The launch of the Crimean Platform is an ambitious step, as it will help remind the world of the illegal annexation.”

“Crimea Platform has been launched to create a future opportunity, rather than to bring Crimea back immediately,” he says.

“It consolidates diplomatic support and helps collect political messages; it explores the regional geopolitical landscape and establishes a network for long-term cooperation. Russia will have to face a much more coherent policy by Ukraine over the Crimea issue.”

And while this may not yet prompt the Kremlin to up sticks and leave Crimea, Professor Kapitonenko believes that it will “certainly raise the cost of the occupation”.

Iliya Kusa, an international relations analyst at the Ukrainian Institute of the Future, a think tank, is of similar mind.

“The summit is unlikely to radically change the situation around occupied Crimea. I think that the goal of the event was to raise awareness of this issue, which hasn’t been discussed seriously on the international level since 2014,” he tells Emerging Europe.

Russian media reaction to the summit has been telling, while Kremlin spokesman Dmitry Peskov denounced the summit as an “anti-Russian event.”

For weeks, Russian publications have been attempting to discredit the summit, and as “proof” of the summit’s “failure” it pointed to the conspicuous absence of the heads of state from two of the European Union’s most powerful countries: Germany and France.

This raised eyebrows in particular because German Chancellor Angela Merkel was in Moscow last week to meet with Russian President Vladimir Putin.

However, Iliya Kusa believes that this is not as significant as is being made out.

“[France and Germany] dispatched their representatives to Kyiv, there wasn’t any change in their attitude towards Moscow or occupied Crimea,” he says. Beyond this, he also cited the rapidly developing situation in Afghanistan as another reason to explain the absences, particularly Germany, which holds parliamentary elections next month.

Professor Kapitonenko however believes that it is an indication that western European states are attempting to maintain dialogue with Russia.

“The EU powerhouses seem to be cautious about this initiative. They want to keep dialogue with Russian open, and they have a global agenda, in which Russia matters.”

This, perhaps more than the absence of heads of state, restrains the potential ramifications of the summit.

“That would certainly limit the impact of the platform, turning it into mostly a regional – Black Sea and eastern European – event,” Professor Kapitonenko tells Emerging Europe.

Crimea of course is just one of many outstanding disputes Ukraine has with Russia.

As well as the peninsula, the bulk of Luhansk and Donetsk provinces continue to be controlled by Russia-backed separatists, and all three territories must have their status resolved for any kind of rapprochement to occur between Ukraine and Russia.

A military solution appears to be out of the question, at least for now. Despite Ukraine investing hefty sums of money on upgrading and revitalising its armed forces, including the purchase of dozens of Turkish combat-proven drones, it still stands little chance against the military power of Russia, which “inherited” the bulk of Ukraine’s navy when the Soviet Union disintegrated.

Furthermore, the imminent completion of the Russian Nord Stream 2 gas pipeline will make Europe all the more economically reliant on Russia.

As such, diplomatic maneuvering and persistent advertising of its cause may be Ukraine’s best bet for the foreseeable future.

“Ukraine can’t do much – for now,” says Professor Kapitonenko. “The initiative is a long-term project, which may turn out to be much more effective under different circumstances.”

A new Sheriff in town: Emerging Europe this week
When will the Western Balkans kick its coal addiction?
Comment