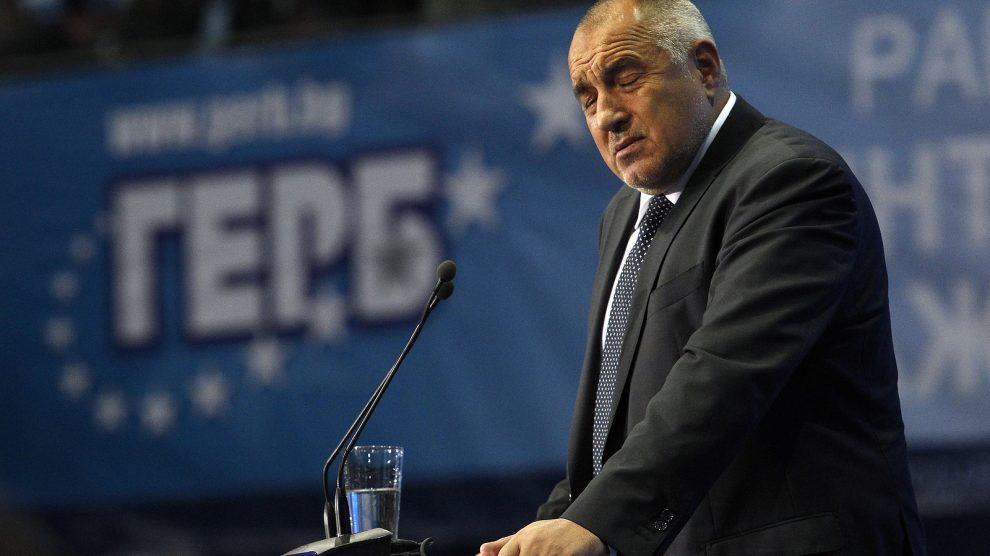 With none of Bulgaria’s three largest parties able to form a working coalition in a highly-fragmented parliament, a new election looks unavoidable.

Bulgaria will hold a snap election after the Socialist party announced at the weekend that it would be unable to form a government.

Both the GERB party of outgoing Prime Minister Boyko Borissov (pictured above) and a new, anti-establishment party, known as There Is Such a People, have also failed to find willing coalition partners since an inconclusive general election on April 4 returned a highly-fragmented parliament.

Mr Borissov’s GERB won the April election with 25.8 per cent of the vote – well down on the more than 33 per cent it received four years ago – followed by There Is Such a People on 17.4 per cent. The Socialists came in third with 14.8 per cent, losing half of their parliamentary seats.

None of the three parties have anywhere near enough seats to form a government on their own, and all three have ruled out working with each other.

Two other new, anti-establishment parliamentary parties, Democratic Bulgaria and Stand Up! Mafia Out!, which took 11 per cent and 5.1 per cent of the vote respectively, have also ruled out working with GERB and the Socialists.

‘Even a temporary government is impossible’

“The three new parties in the parliament have shown political immaturity,” said Socialist leader Kornelia Ninova after declaring that her party would be unable to form a government. “They could not overcome their egos. Given the situation, a government led by us, even a temporary one, is impossible.”

There Is Such a People’s leader Slavi Trifonov, a musician and TV star, in turn laid the blame squarely at the door of GERB and the Socialists.

“The support offered to us comes from political factions which are harmful, greedy and proven to be compromised. What they offer is not support, but dependence,” he said.

Shortly after the April vote, Mr Borissov called on party leaders to consider a technocrat government that would focus on bringing in cash from the European Union.

“I offer you peace. I offer you the chance to put forward experts, to take responsibility,” he said at the time. “This is my proposal for all, enjoy the results for two, three days and then consider – what is stable and what is not.”

But this idea now appears to be a non-starter given the mistrust between GERB, the Socialists, and the new, anti-establishment parties.

Bulgaria’s score of 44 (out of 100) on Transparency International’s most recent Corruption Perceptions Index placed it 69th out of 180 countries surveyed, and was the worst result of any European Union member.