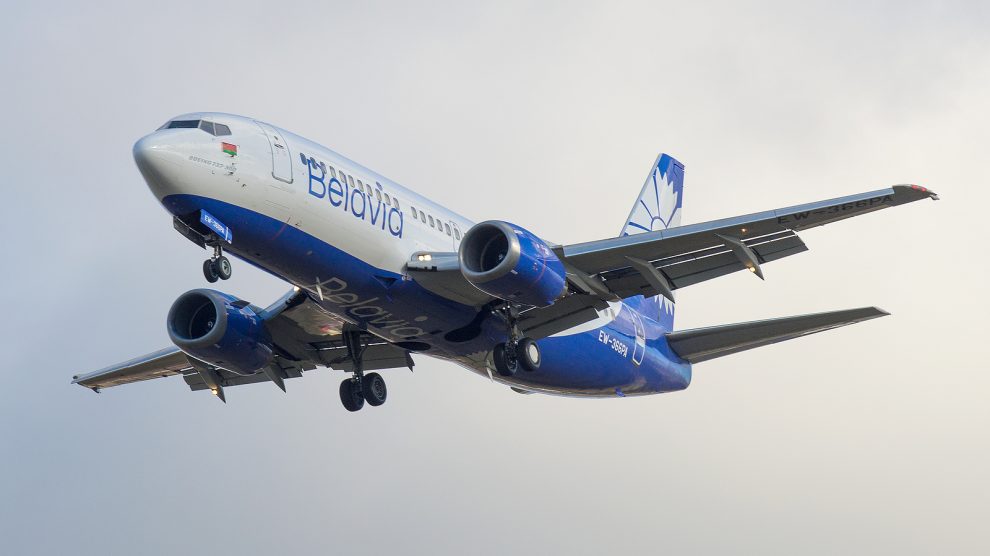 Airlines carrying migrants from the Middle East to Belarus could be hit by sanctions approved by the EU on November 15.

The European Union has approved a new round of sanctions against Belarus, measures it says are needed to respond to the weaponisation of migrants and refugees by the Minsk regime.

After a meeting of EU foreign ministers in Brussels, EU Foreign Policy Chief Josep Borrell said that the decision to introduce more sanctions, directed at airlines, travel agents and others accused of helping to bring migrants to Belarus, reflected “the determination by the European Union to stand up to the instrumentalisation of migrants for political purposes”.

“We are pushing back on this inhuman and illegal practice,” said Borrell. “At the same time, we continue to underline the unacceptable ongoing repression by the regime against its own population at home, and we will respond accordingly.”

The new sanctions follow European Council conclusions last month when EU leaders declared that they would not accept any attempt by third countries to instrumentalise migrants for political purposes, condemned all hybrid attacks at the EU’s borders and affirmed that it would respond accordingly.

On November 10, Borrell issued a statement on behalf of the EU strongly condemning the regime of Alexander Lukashenko for deliberately putting people’s lives and wellbeing in danger, and stirring up the crisis at the EU’s external borders, in an attempt to distract attention from the situation in Belarus, where brutal repression and human rights violations are continuing and even worsening.

Since October 2020, the EU has progressively expanded its restrictive measures in the light of the situation in Belarus. These measures were put in place in response to the fraudulent nature of a presidential election in August 2020, which Lukashenko claimed to have won with an implausible 80 per cent of the vote.

Since then, the Minsk regime has undertaken the violent repression of peaceful protesters, opposition leaders, members and journalists. Svetlana Tikhanovskaya, who by any objective measure won the August 2020 poll.

The EU has refused to recognise the results of the election, condemning them as neither free, nor fair.

The last round of sanctions against Belarus, including a ban on the overflight of EU airspace and access to EU airports by Belarusian carriers, was introduced in June in the wake of the hijacking of a Ryanair plane flying from Athens to Vilnius in order to arrest a journalist, Roman Protasevich.

Full details of the latest sanctions have yet to be made public, but are believed to include airlines which have played a key role in bringing migrants from countries such as Iraq and Syria to Belarus.

A list of people and entities to be hit by asset freezes and travel bans is expected to be finalised in the coming weeks. “It will include people, airlines, travel agencies and everyone involved in this illegal push of migrants against our borders,” Borrell confirmed.

German Foreign Minister Heiko Maas on November 15 called on airlines to follow the example of Turkish Airlines by restricting flights to the Belarus capital in order to escape sanctions.

“The situation is so dramatic that I can no longer rule out the denial of overflight rights or landing permission in the European area,” he said.

Turkish Airlines, previously one of the main international carriers flying to Minsk, agreed to suspend one-way ticket sales for Iraqi, Syrian and Yemeni nationals seeking to reach Europe via Belarus on November 12.

Belarus flag carrier Belavia said on November 14 that nationals of Iraq, Syria, Yemen and Afghanistan will not be allowed to board flights to Belarus from Dubai as a result of pressure for authorities in the United Arab Emirates.

Syria’s Cham Airways meanwhile has halted all flights from Damascus to Minsk.

On the Poland-Belarus border itself, the situation is becoming increasingly tense.

Thousands of migrants arrived at the Bruzhi-Kuźnica border crossing over the weekend, having reportedly been told that the checkpoint – closed last week – was set to reopen. Other reports have claimed that migrants were told by the Belarusian authorities that buses would be waiting to take them to Germany.

At least 10,000 people are now believed to be massed on the border, trapped in no-man’s land unable to enter Poland but prevented from turning back into Belarus.

The Iraqi government on November 15 said it would begin operating repatriation flights this week for its citizens stuck on the border, on a “voluntary” basis.

“Iraq will carry out a first flight for those who wish to return voluntarily from Belarus on November 18 , Iraqi foreign ministry spokesman Ahmed al-Sahaf told Iraqi television.