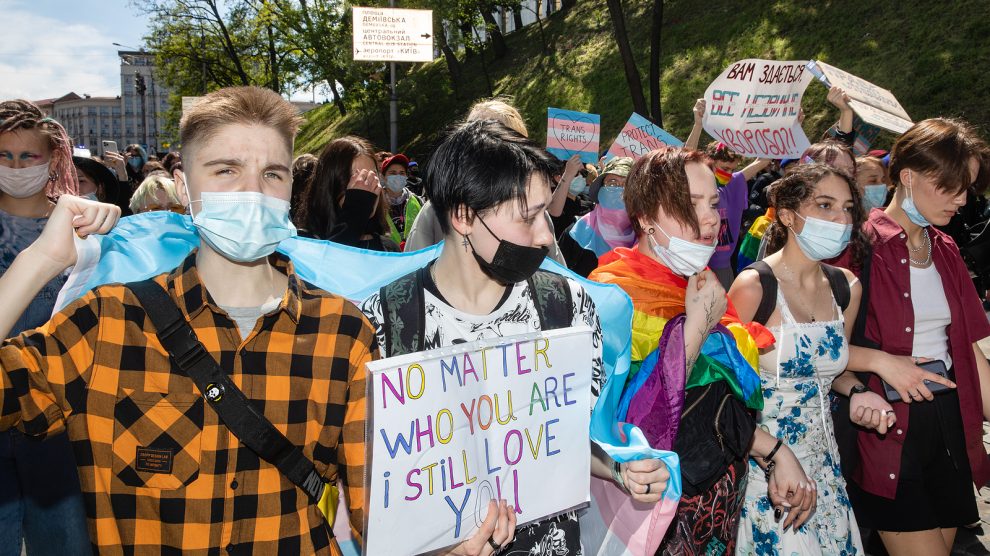 Pride parades are now commonplace throughout Ukraine, but beyond the rainbow flags the government’s support for the rights of the country’s LGBT+ community might be on the decline.

In September, thousands of people marched peacefully through the Ukrainian capital Kyiv in the city’s now annual LGBT+ pride parade – a victory of sorts given that previous parades have not always been so peaceful. In 2015, 10 people were injured when they were attacked by homophobic protesters in Kyiv, while in 2020 Odesa Pride was attacked by a nationalist group.

This year in Odesa, clashes broke out between Ukrainian police and a far-right group trying to disrupt the pride march.

Ukraine’s LGBT+ community has nevertheless been organising pride parades for some years now, particularly since the country – on paper at least – began increasing support for LGBT+ rights in 2014.

That year, in which then-President Petro Poroshenko concluded an Association Agreement with the European Union, laws to ban discrimination against LGBT+ people in the workplace were adopted, signalling a small but important change in official policy.

Since then, however, Ukraine has seen little further progress on key issues such as the legal status of same-sex partnerships, with some people arguing that the trend is now heading in the other direction, leading to a reduction in state support for the LGBT+ community.

The election of Volodymyr Zelensky as Ukraine’s youngest-ever president in spring 2019 was met with high expectations by the country’s LGBT+ community.

Although Zelensky’s Servant of the People party had no specific agenda regarding LGBT+ rights, the young candidate managed to appeal to voters through his broadly inclusive language and progressive rhetoric on social media.

This led many to believe that reforms initiated during the presidency of Poroshenko would be continued and that further liberalisation would occur, guaranteeing more rights to LGBT+ people, including even same-sex marriage – or at least same-sex civil partnerships.

However, things have not worked out as expected. Instead, Ukraine has seen a decline in official support for liberal social policies during Zelensky’s incumbency. Many in the country’s LGBT community now feel that they are swimming against the political tide.

Even though during his first major press conference in October 2019 Zelensky emphasised that all Ukrainians could freely choose their language, religion as well as sexual orientation, subsequent developments have made his commitment to such promises dubious.

Last year, the Servant of the People party tried to change its official ideology. While in July 2019, during parliamentary elections, the party positioned itself as libertarian, during its 2020 party congress members decided to adopt a more centrist ideology.

This led many Ukrainians to question the party’s political priorities, accusing it of populism and inconsistency.

Moreover, in February 2020, at the dawn of the Covid-19 pandemic breakout, the Ukrainian government decided to close the country’s Human Rights Directorate, stating that human rights “were no longer a priority” for the work of the Ministry of Justice.

The Human Rights Directorate had been established in 2016 in order to coordinate a national human rights strategy and played an important role in the development of legislation on European integration.

According to Maksym Eristavi, the chair of the Kyiv Pride management board, the Ukrainian government itself is not openly homophobic, but there are homophobic individuals in it, even in President Zelensky’s circle.

He says that the Covid-19 pandemic is the major factor why LGBT+ rights have not been expanded under the Zelensky administration.

“I think because of the pandemic, we were never able to establish what kind of clear position President Zelensky has on LGBT+ issues,” Eristavi tells Emerging Europe. “He was vocal about his personal support for equality for queer people before the pandemic. But since then that communication has been basically dropped down to zero.”

“I think parliament is not active enough with regard to these issues – again because of the pandemic. This is a pandemic-induced flux, which is a real cause of worry.”

The most alarming signal of a change in the Servant of the People party’s approach to LGBT+ issues was a move to establish a parliamentary association named “Values. Dignity. Family”, which included almost 300 MPs.

The group was initiated by an MP from the ruling party, Svyatoslav Yurash, and an MP from the pro-Russian opposition Platform For Life party, Oleh Voloshyn, to “oppose same-sex marriage and LGBT+ adoption rights”.

The draft bill was an almost literal translation of a Russian law and called for fines to be imposed on anyone spreading “homosexual propaganda”.

Homophobic rhetoric about same-sex marriage and equality “forced on Ukraine by the West” has long played a significant role in Russia’s efforts to discredit Ukraine’s pro-European aspirations.

This has been an issue in the broader context of developments taking place elsewhere in the region: Russia has long been at the forefront of anti-LGBT+ rhetoric throughout emerging Europe.

“It is not only a fight at the local level, but also internationally,” says Eristavi. “Homophobic groups are well-coordinated, they possess a lot of resources. Of course, Russia plays a big role in their coordination. The Russian government has been a big part of the anti-gay conspiracy. It empowers international homophobic groups, and I see this as the biggest problem, much bigger than societal attitudes towards gay people in Ukraine.”

As long as such factors are in play, holding pride parades in relative peace – with requisite protection from the police – is about as good as it gets for Ukraine’s LGBT+ community.

Buckle up: Covid-19 has forever changed the way we travel
Airlines flying migrants to Belarus could face EU bans
Comment