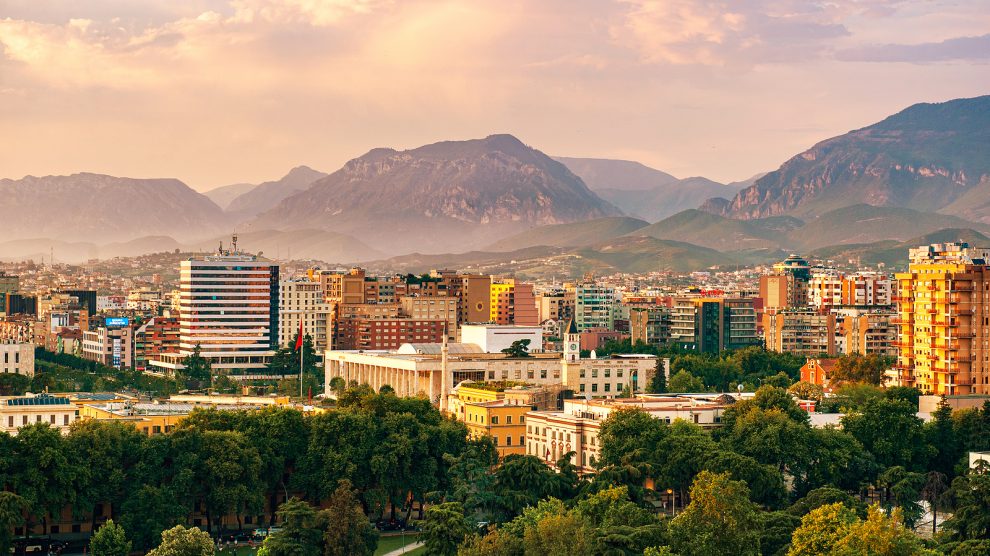 Undeterred by its rejection by the the three other Western Balkans states, Albania, North Macedonia, Serbia have agreed to speed up implementation of their Open Balkans initiative, sometimes referred to as ‘Mini-Schengen’.

A bold project to create a border-free travel zone in the Western Balkans moved closer to reality on December 21 after the leaders of Albania, North Macedonia, and Serbia signed a series of agreements that will see the three countries open up their labour markets to each other.

Besides opening labour markets, the agreements also include the creation of a common database for ID documents, and cross-border recognition of commercial registrations, meaning that firms based in any of the three countries will no longer need authorisation to operate in the others.

The arrival of Vučić in the Albanian capital had been met by a demonstration at which a Serbian flag was burnt by supporters of Rama’s predecessor Sali Berisha, who opposes the Open Balkans initiative.

Rama dismissed the protesters as “fools” and reiterated his stance that Open Balkans was in “the strategic interest of Albania and the entire Albanian people”.

Even Vučić seemed unmoved by the flag burning, saying that “some of our people did the same to the Albanian flag when Rama came to Belgrade. These people are looking back, not forwards”. He added that he had met Albanians keen to do business in Serbia, as well as Serbs wanting to invest in Albania, and that the initiative was about “making their lives easier”.

Originally dubbed Mini-Schengen, Open Balkans will offer free movement across Serbia, Albania, and North Macedonia. All border controls between the three states will be removed by 2023 creating one contiguous zone of free movement for goods, services, capital and people, mimicking the four freedoms of the EU’s single market.

The idea was first mooted by Rama, Vučić, and Zaev in October 2019 when they agreed to explore the possibility of creating a passport and duty-free zone between participating countries: Bosnia and Herzegovina, Kosovo, and Montenegro were invited to join them, but have so far refused to do so.

Montenegro views it as a distraction from EU accession, Bosnia and Herzegovina sees it as a Serb-dominated initiative, while Kosovo is reluctant to take part unless it can do so as a fully-recognised sovereign state.

Asked at a press conference which followed the summit if Kosovo could take part “with its name and flag”, Vučić said that “this was not a problem at all”.

Entrepreneurs in the Western Balkans have welcomed the initiative.

“It is an initiative at the right time delivering a strong message: we need less of the past and more of the common future because what unities us is stronger that what sets us apart,” he tells Emerging Europe.

“Forward-looking economies know how to embrace that. Entrepreneurs need facilities that create in-depth integration, more networks, less regressive politics and better positioning by acting as a common, bigger market. The tourism industry will have practical benefits by allowing borderless travel and by joint advertising platforms and initiatives. Intra-regional economic and societal connections are the answer to the challenges of the future.”

Open Balkans was born partially out of frustration with the European Union’s failure to offer a clear road map towards accession to any of the six Western Balkans states, something that the three leaders all but admitted in a jointly-authored opinion editorial published in the Germany daily Frankfurter Allgemeine Zeitung on December 20.

“As responsible politicians we can’t allow the region to return to the nightmares of the past at a time when the EU is incapable of doing more on its expansion. The Open Balkans initiative is not a consolation prize to replace EU membership but a big step towards membership,” wrote Rama, Vučić, and Zaev, adding that the EU should support the initiative.

While European Commission President Ursula von der Leyen’s visit to the region in October ahead of the EU-Western Balkans Summit sent an important signal that the Western Balkans’ future lies within the European Union, only Montenegro and Serbia have so far been allowed to open accession talks.

The Commission itself has admitted that delays in the official launch of accession negotiations with Albania and North Macedonia – currently blocked by a Bulgarian veto over language and minority rights disputes – are having “a negative impact on the credibility of the EU”.

Brussels has so far been lukewarm – at best – towards the Open Balkans initiative, preferring to promote the Central European Free Trade Area (CEFTA), of which Albania, Serbia, and North Macedonia (as well as Kosovo, Montenegro, Bosnia and Herzegovina, and Moldova) – are already a part.

CEFTA aims to facilitate trade and the free movement of goods between the seven countries until they join the European Union.