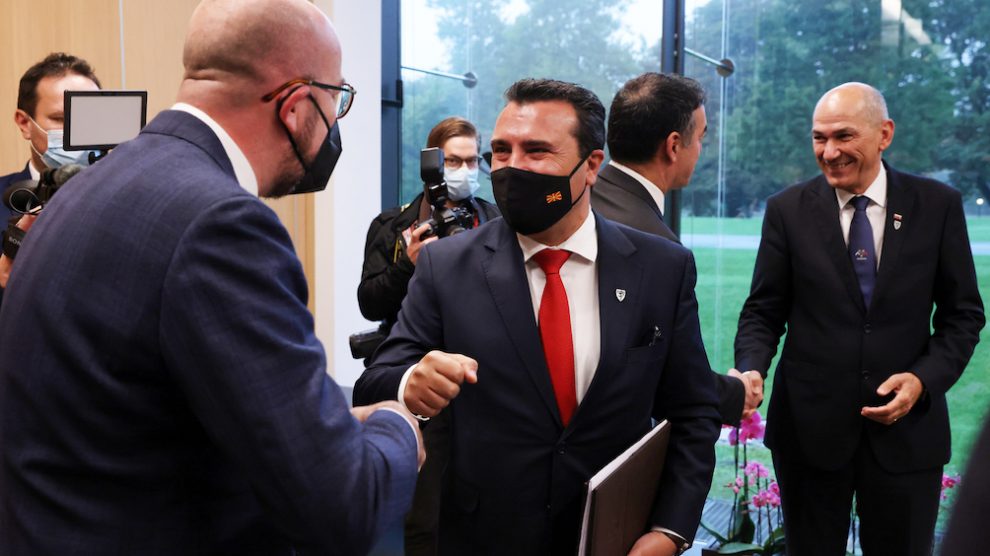 An underwhelming summit has left the Western Balkans further from EU membership than ever.

An ’emergency’ EU-Western Balkans summit, convened by Slovenia, which currently holds the rotating six-month presidency of the Council of the European Union, this week failed to offer the six countries of the region any kind of roadmap towards EU membership.

While some EU officials were keen to stress that enlargement remains on its agenda: “The Western Balkans are part of the same Europe as the European Union. The EU is not complete without them,” said European Commission President Ursula von der Leyen, others were less optimistic.

“In all frankness, there is discussion among the 27 about our capacity to take in new members,” said Charles Michel, president of the European Council.

Indeed, by the summit’s close on the evening of October 6, many in the Western Balkans were left feeling that not only are countries of the region are no closer to EU membership, but that they are further away than ever.

“It’s clear that accession is not moving forward,” says Eric Gordy, a professor at UCL’s School of Slavonic and East European Studies (SSEES).

“Both because [Western Balkans] states are not meeting accession criteria — particularly on rule of law, media, judiciary, and foreign and security policy — but also because there is a lack of willingness on the part of the EU to admit new members.

“The contradictory statements that followed the summit also indicate that the EU does not itself have a unified and consistent position.”

Ahead of the summit, Slovenia made the suggestion that all six Western Balkans states should be admitted to the EU by 2030.

However, this idea gained little traction among other EU members.

“I don’t personally find anything controversial in insisting on a deadline. Time is the most expensive commodity, and the people of the Balkans have been involved in this process, this society-changing process, for a good part of the last two decades,” Marko Savković, executive director of the Belgrade Fund for Political Excellence tells Emerging Europe.

For some time, 2025 was viewed as a potential date that at least some Western Balkan countries, in particular Serbia, could join the EU.

But in 2018, Jean-Claude Juncker, then president of the European Commission, made it clear that this had never been a promise, rather “encouragement” for candidate countries.

Since then, for many EU members the issue of enlargement has become far more politically sensitive, according to Savković.

“And to be honest, we haven’t really helped ourselves; politicians present a vision of a region in discord, just a few steps away from renewed conflict, interested above all in ‘capturing’ the state,” he says.

“The governments of France or Germany for example are not willing to give us a date because to do so would offer the opposition in those countries ammunition.”

But does this failure to offer the Western Balkans states any kind of genuine hope erode the EU’s credibility in the region?

Savković suggests that there has been a “credibility crisis” for several years, “ever since it became clear that Juncker’s ‘promise’ of membership by 2025 for ‘frontrunners’ was no such thing,” he says.

Zijad Bećirović of the Ljubljana-based think tank IFIMES agrees that the EU’s credibility has been eroded.

“The confirmation of this is the Bulgarian blockade of accession talks with North Macedonia, but also the failure to open any new negotiation chapters with Serbia,” he says.

“Many EU countries would not at this moment satisfy the conditions that are imposed on the Western Balkans countries. Credibility has also been lost by the way in which the dialogue between Prishtina and Belgrade has been conducted,” he adds.

A future outside of the EU

Eric Gordy of SSEES tells Emerging Europe that several factors changed the EU’s stance towards the Western Balkans between 2000 and today.

Its appeal to democratic values has been eroded by its tolerance for authoritarianism and right wing extremism, he says.

Crises have dampened its economic promise, while the treatment of Southeastern European countries such as Romania and Bulgaria when it comes to migration has left a “sour taste of misuse”.

“The EU no longer has a monopoly over the potential loyalty of nonmember states as new competitors have emerged. These facts, combined with the receding prospects of actually achieving membership have given an incentive to many political elites to envision a future outside of the EU, although not necessarily as a part of another bloc,” Gordy says.

For Savković, there is no question that economically at least, the Western Balkans countries will remain close to the EU.

Where the bloc may already be losing its grip is values.

“Repeated public opinion polls show this as a trend over the last five years. When one takes perception of power in international relations, China and Russia seem to be on the rise, with the EU and the West in general retreating.

“The EU is not good at communicating, or ‘selling’ its ‘product’ because it depends on the cooperation of the host [i.e] candidate country. And it has missed some important cues because it takes too much time to react,” he concludes.