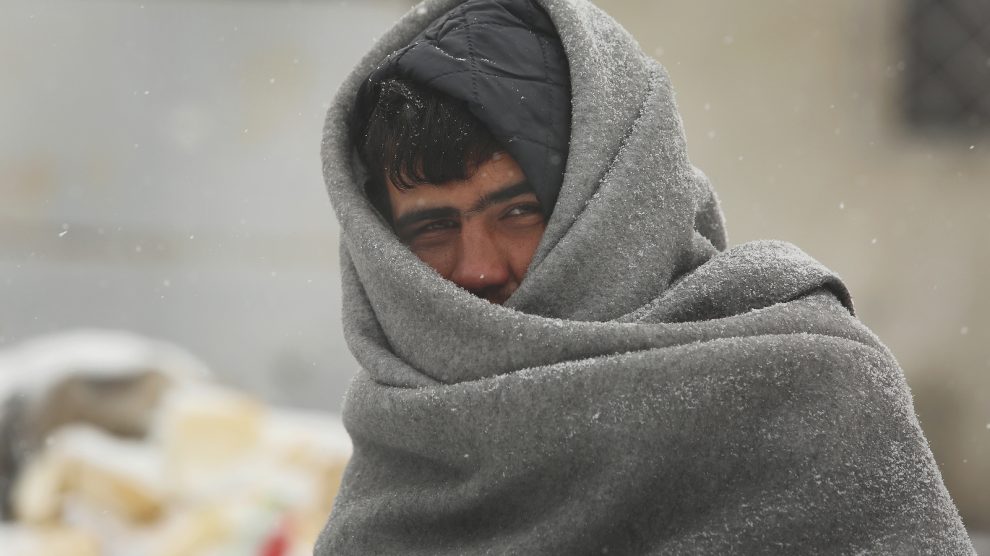 Migrants still stuck on the border between Poland and Belarus continue to see their human rights abused, while others face repatriation to countries where they could face persecution.

Asylum-seekers and migrants trying to enter the European Union from Belarus and facing pushbacks and other human rights violations on the Polish border, are subjected to horrific torture or other ill-treatment, inhumane conditions, extortion and other abuse at the hands of Belarusian forces, new evidence gathered by Amnesty International has revealed.

Harrowing testimonies reveal that people including families with children, often in need of immediate help, have been beaten with batons and rifle butts and threatened with security dogs by Belarusian forces, as well as being forced to repeatedly cross the border in dangerous conditions by both Belarusian and Polish authorities, including through a fast-flowing river.

“People at the border find themselves between a rock and a hard place. Stranded in what is effectively an exclusion zone on Belarus’s border with the EU, they face hunger, exposure and shocking levels of brutality from Belarusian forces repeatedly forcing them into Poland where they are systematically pushed back by Polish officers. The opposing forces are playing a sordid game with human lives,” according to Amnesty International Refugees and Migrant Rights Researcher Jennifer Foster.

Amnesty International interviewed a total of 75 people who were lured into Belarus between July and November 2021 by a false promise of easily crossing into the EU.

The organisation’s research revealed beatings and other serious torture or other ill-treatment, including people being deprived of food, water, shelter, and sanitation, as well as theft of phones and money or extortion for bribes by members of Belarusian forces.

Since August, thousands of people, mainly from Syria, Iraq, and Yemen, have traveled to the Belarusian capital of Minsk, often through Middle East-based holiday tour operators making false claims of easy EU entry.

EU leaders have described this as a “hybrid threat” orchestrated by the Belarusian authorities in response to the EU sanctions introduced after widespread human rights violations following the country’s 2020 presidential election, the official outcome of which was widely disputed and led to mass peaceful protests.

Those interviewed by Amnesty International testified that they faced these abuses from Belarusian forces as they moved from Minsk to what is effectively an exclusion zone, typically fenced off, on Belarus’ border with Poland, Latvia and Lithuania. People were escorted in groups to “collection sites” within the fenced off zone before being violently forced to cross into Poland, while being chased by dogs and forced to walk through freezing rivers by Belarusian authorities.

Once in a “collection site”, people are not allowed to leave or go back towards unfenced areas accessible to civilians, and are trapped in inhumane conditions for days or weeks. People described being left without any food for days, or with minimal amounts of water or bread, and no shelter or sanitation.

A Kurdish Syrian family interviewed by Amnesty International stayed in the fenced zone for 20 days. They ate only once per day and, on one occasion, went at least 24 hours with nothing to feed their two children. The father described his family’s ordeal: “We were almost unconscious sometimes and were hungry and thirsty and couldn’t find any help, neither from Polish soldiers nor the Belarusians.”

Belarusian officials also took advantage of people entering the fenced areas and beat them violently as they crossed in, often stealing phones and money from them during the process. One asylum-seeker even said he was punched with “knuckle dusters” and kicked with steel-toed boots.

International human rights law protects the right to claim asylum, as well as the right to freedom from torture or other ill-treatment. Amnesty says that Belarus is flagrantly violating these rights, despite being party to relevant international treaties that protect them.

Most of those who made it across the border fence into Poland were immediately apprehended and pushed back by Polish soldiers after a few hundred metres. Amnesty International also documented several cases of individuals who managed to go further into Polish territory, including walking for days before being picked up by Polish law enforcement authorities or approaching the authorities themselves after days spent without food or shelter.

All but one person Amnesty International spoke to was pushed back to Belarus, without any due process. Despite individuals expressing their intention to apply for asylum in the EU, they were stopped in a long series of systematic mass expulsions that completely disregarded international and EU law obligations.

Polish security forces clearly witnessed the mistreatment asylum seekers and migrants suffered on the Belarusian side, and yet still turned them back across the border fence.

Most of the people who Amnesty International spoke to who had tried to cross the border more recently said their phones were frequently damaged by Polish forces, and at times people suffered violent treatment, including children being pepper sprayed and adults being pushed into rivers.

A Syrian man who travelled with his wife and two children told Amnesty International that members of Polish forces put him and his family inside the back of a military truck: “It was big enough for 50-60 migrants and they drove about one hour. And then they pushed us back in the buffer zone. In the truck a soldier was listening to us talking and used pepper spray against us again, and my son and daughter cried for almost one hour”.

An Iraqi Yazidi man told Amnesty International that about an hour after crossing into Poland he was apprehended by Polish forces and, along with several other men, taken to a small river marking the border with Belarus: “The river was only about 10 or 15 meters-wide but it was deep and fast moving. They forced us off the vehicles and pushed us into the water. Anyone who didn’t get in the river was beaten with batons. [They] also had dogs. Women and kids and also some men were taken elsewhere. I saw one man taken away by the current. If you couldn’t swim, you drowned”.

Despite egregious rights violations by the EU states bordering Belarus, the European Commission has failed to carry through legal proceedings to uphold EU laws. Furthermore, on December 1 the Commission proposed provisional emergency measures that could allow Latvia, Lithuania and Poland to derogate from EU rules, including by holding asylum-seekers at the border for 20 weeks with minimal safeguards and making deportations easier.

“Thousands of people – including many fleeing war and conflict – find themselves stuck in Belarus in the depths of winter in extremely precarious conditions. Instead of receiving the care they need, they are subjected to brutal violence. Belarus must immediately cease this violence, and EU member states must stop denying people the chance to escape these egregious violations let alone returning them to Belarus to face them again and again,” said Foster.

Amnesty International is concerned that those who remain trapped in Belarus with irregular status, whether in the border regions or the capital Minsk and other cities, are at risk of serious human rights violations.

Confronted with an increasing number of stranded asylum seekers, Belarusian authorities have already started forcibly returning them to their countries of origin, including returning them unlawfully without an evaluation of their protection needs.

Many people the organisation spoke to face forcible return to Syria and not the countries they departed from, including Egypt, Turkey and Lebanon, due to re-entry bans.

Last week, Belarusian media reported that a Polish solider, Emil Czeczko, had crossed the border into Belarus and sought political asylum “because of his disagreement with Poland’s policy on the migration crisis”.

Poland’s defence minister, Mariusz Błaszczak, said that “the soldier who went missing yesterday had serious legal problems and had handed in his notice to leave the army”.

“He should never have been assigned for service at the border,” added Błaszczak. “I have demanded an explanation as to who was responsible for this.”

Su-30SM fighters jets from both countries were also part of patrols, the Belarus military said.