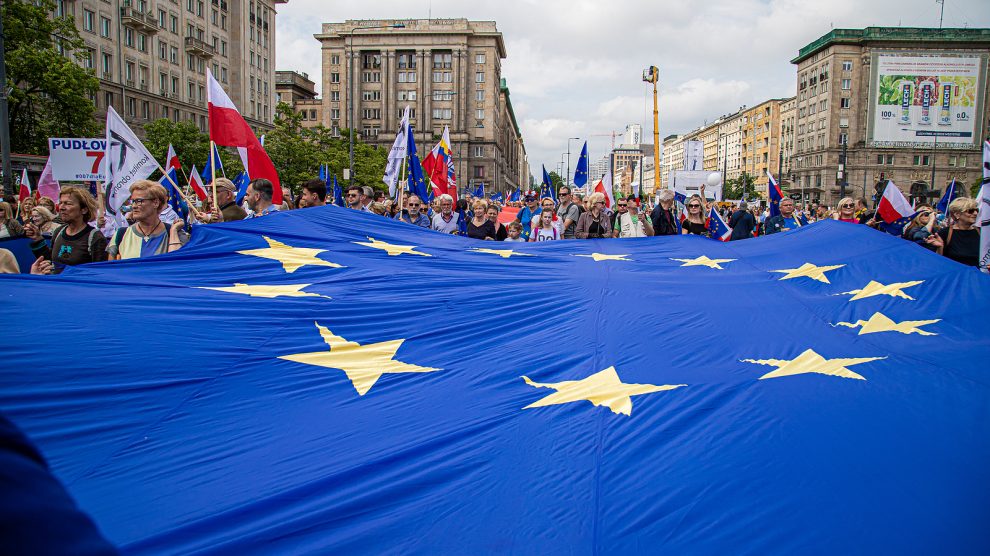 A new ECJ ruling means that Poland is now liable to pay the European Union 1.5 million euros in fines per day.

The European Union’s top court has ordered Poland to pay the European Commission a daily fine of one million euros for failing to suspend a disciplinary chamber for judges that the bloc says breaches EU law, in yet another escalation of an ongoing conflict between Warsaw and Brussels.

The European Court of Justice (ECJ) said on October 27 that Poland was breaking the law by maintaining the disciplinary chamber of its Supreme Court, a body that is deemed to be incompatible with EU law.

The fine comes into effect immediately and will be imposed every day until the Polish disciplinary chamber is abolished, the ECJ said.

The ruling comes a month after the ECJ ordered Poland to pay another fine, of 500,000 euros per day, for its failure to halt operations at a lignite mine in Turów on the country’s border with Czechia.

Poland has so far refused to pay, and the EU has in response threatened to block budget payments to the country.

The EU has already delayed disbursing 36 billion euros Poland requested from the bloc’s Covid-19 recovery fund over the rule of law dispute.

The latest fine has been denounced as “blackmail” by Polish Government Spokesperson Piotr Müller.

He tweeted: “The European Union is a community of sovereign states governed by clear rules. They show a clear division of competences between the EU and the member states. The issue of regulating the organisation of the judiciary is the exclusive competence of member states.”

The disciplinary chamber of Poland’s Supreme Court was set up in 2018 to penalise top judges where necessary, with the country’s government saying that it was needed to fight corruption. However, critics have argued that it is being used to punish independent judges given that it has the power to sanction the content of their rulings.

Last week, during a tense debate in the European Parliament, Poland’s Prime Minister Mateusz Morawiecki claimed the ECJ was responsible for a “creeping revolution” that threatened to undermine his country’s sovereignty.

Morawiecki lashed out at EU leaders, telling European Commission President Ursula von der Leyen “we will not be blackmailed” after she vowed to take action against Poland after the country’s top court ruled on October 7 that key parts of EU law were incompatible with the Polish constitution.

Morawiecki has since warned that any move to implement calls from some member states to cut EU funding for Poland would “start World War III”.

From Romania, EIT Health InnoStars Awards winner Tully is helping children manage their emotions
CEE is losing out on a growth opportunity by not decarbonising
Comment