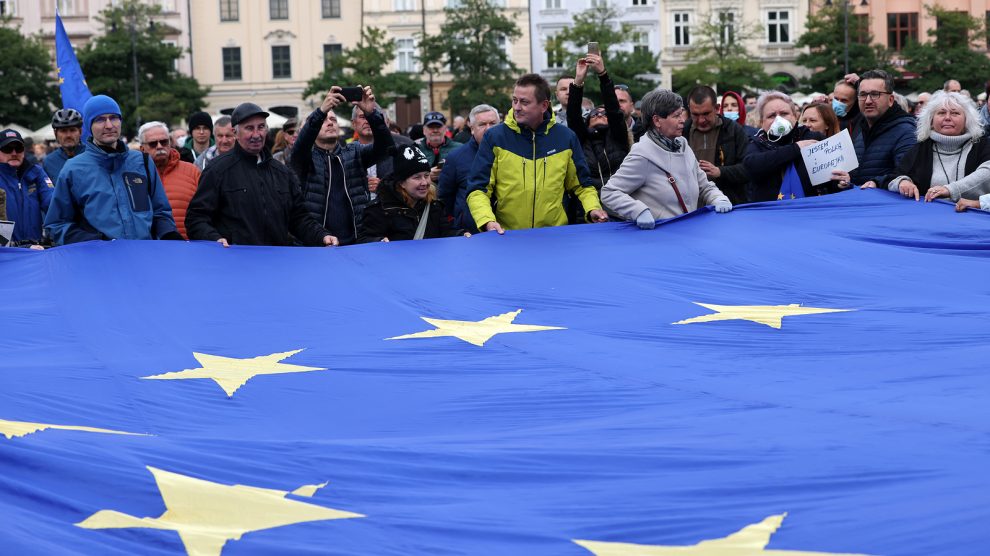 Predictions of Poland’s imminent exit from the European Union – dubbed Polexit – have little basis in reality.

Poland’s Constitutional Court last week ruled that some European Union laws are “incompatible” with the Polish constitution, and on October 12 the ruling was published in Poland’s official gazette, making it legally binding and setting up yet another clash between Warsaw and Brussels.

While already dubbed a legal Polexit, the move does not, however, mean that Poland’s full withdrawal from the EU is no merely a question of time.

For a start, Poland’s government – however eurosceptic it might be – wants no such thing.

Even as the court’s ruling was being published the country’s prime minister, Mateusz Morawiecki, was reassuring both Brussels and his own people – hundreds of thousands of whom protested at the weekend against the ruling – that Poland has no desire to leave the EU.

“Any talk of Polexit is fake news,” he said.

Paulina Lenik, a researcher at the School of Slavonic and Eastern European Studies at University College London, says that she could not imagine the government going ahead with Polexit.

“What’s happening now is tied to internal politics, particularly the reappearance of Donald Tusk, and positioning ahead of elections in 2023,” she tells Emerging Europe.

Tusk – a former prime minister and president of the European Council who last year returned to frontline Polish politics to lead the country’s largest opposition group, Civic Platform – spoke at the largest demonstration over the weekend, in Warsaw, telling crowds that he would “defend a European Poland”.

Speaking to the crowd, Tusk warned that a “pseudo court, a group of people dressed in judge’s gowns and on the order of the [ruling] party’s leader, in violation of the Polish constitution, decided to lead our homeland out of the EU”.

Lenik however believes that the ruling Law and Justice party (PiS) is instead using tried and trusted tactics of instigating division in Polish society to shore up support among core voters.

“The party thrives on divisive issues, be it LGBT+ rights or reproductive laws, and it is now trying to distract people’s attention away from mounting inflation and towards the supremacy of EU law,” she says.

“It is another politically brilliant decoy strategy – find inner divisions to eliminate the electoral uncertainty of swing voters.”

Nevertheless, the ruling once again places Warsaw in direct opposition to Brussels, and while there is no mechanism that allows the EU to expel errant members, it could withhold billions of euros in EU Covid-19 recovery and resilience funds, of which Poland is set to be one of the largest beneficiaries.

The European Commission has yet to approve Poland’s national recovery plan, worth 57 billion euros. The Court of Justice of the EU (CJEU) is currently debating measures that would allow the EU to cut off funds from the bloc’s budget to countries considered to be in breach of the rule of law.

It is expected to issue an opinion on December 2.

According to Szymon Anancz of the Batory Foundation, a Polish NGO, financial penalties remain the most likely consequence of Poland’s latest challenge to the primacy of EU law.

“We may expect further delays to approval of the national recovery programme, new infringement proceedings at the CJEU and acceleration of the conditionality mechanism linking disbursal of EU funds to compliance with rule of law standards,” he tells Emerging Europe.

According to a recent opinion poll, 81 per cent of Poles support EU membership: only seven per cent support Polexit.

“This makes us one of the most euro-enthusiastic societies in the bloc,” adds Anancz.

Another mine of dispute: Turów

Poland is also currently embroiled in another case as the CJEU, brought by Czechia over the continued operation of a coal mine at Turów on the border between the two countries, which the Czechs claim is draining groundwater from local communities and causing serious environmental damage.

Poland has so far defied a European Commission order to suspend operations at the mine until the case is resolved, defiance which in September prompted the CJEU to impose a fine of 500,000 euros for each day it continues extracting coal at the open-pit site. Poland is refusing to pay the fine.

For Poland, the mine is both symbolic and practical. A neighbouring power plant at Turów supplies some 2.3 million households with electricity and the town of Bogatynia is heavily dependent on it economically.

Dominik Brodacki of the think tank Political Insight says that Poland is likely counting on a final ruling from the CJEU soon.

“Until then, the Turów mine will continue to operate and Poland will probably not pay any penalties for this,” he says.

Poland and Czechia have long been negotiating an out-of-court settlement, but talks have been stalled for weeks and the uncertain political situation in Prague has further complicated the issue.

The position of Prime Minister Andrej Babiš looks untenable following the surprise defeat of his ANO party in an election on October 8 and 9, and a new coalition could take months to put together. That the country’s president, Miloš Zeman, is currently incapacitated and unable to nominate a new prime minister has not helped.

Nevertheless, if a new Polish offer is reasonable enough, a deal could still be conceivable, says Zdeněk Beránek of Europeum Institute for European Policy.

Łukasz Ogrodnik, an analyst with the Polish Institute of International Affairs, agrees.

“In an optimistic scenario, a bilateral deal could be made once a new government is formed [in Czechia]. The second scenario is to wait for the ruling of the CJEU, but when that will be, we don’t know,” he says.