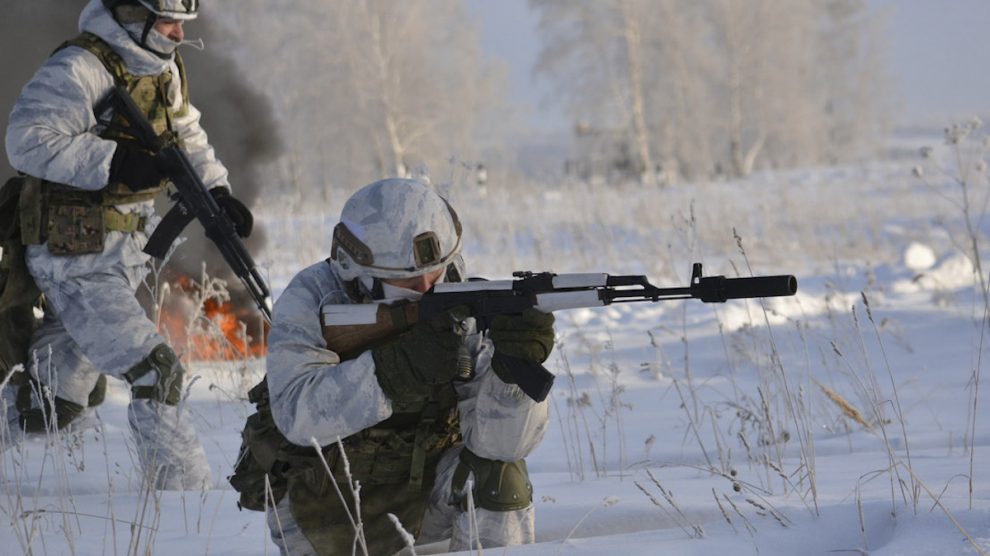 A new package of sanctions against Russia could be passed by the US Senate as early as this week, and take effect before any actual invasion.

Another escalation of the armed conflict in Ukraine will have devastating consequences for human rights in the region, threatening civilian lives, livelihoods and infrastructure, driving acute food shortages, and potentially causing mass displacement, Amnesty International has warned.

A mobilisation of Russian troops and weaponry around Ukraine’s borders has continued to expand in recent days, and now numbers some 130,000 military personnel, although Ukraine’s President Volodymyr Zelensky has accused the West of inciting “panic” with its warnings of an imminent invasion.

Economic and social rights have already been negatively impacted, the human rights group claims. Rising prices for basic foods and goods, including medical supplies, are affecting people’s right to healthcare and to an adequate standard of living in Ukraine.

This is particularly felt by the very old, the very young, and those on low incomes. The right to education has also been affected with schools closing intermittently over the past two weeks amid security concerns. In Russia itself, the rouble has dropped in value and prices are rising.

“The threat of the use of military force by Russia is already affecting the human rights of millions of people in Ukraine and beyond,” says Agnès Callamard, Amnesty International’s secretary general.

“The consequences of actual military force are likely to be devastating. Ukraine’s recent history is punctuated by conflicts involving Russian troops in Donbas and the illegal annexation of Crimea. These episodes have torn communities and lives apart, as military forces have trampled on the rights of civilians with impunity; it’s time to break that vicious cycle.”

In a military conflict, civilians must be protected and anyone who commits abuses must be held to account. Amnesty International says that it will be monitoring the situation closely to expose violations of international humanitarian law (the laws of war) and international human rights law by all parties.

In 2014-15, at the peak of the armed conflict in Donbas, in eastern Ukraine, all sides violated international humanitarian law leading to the displacement of over a million people. More than 13,000 people died and the toll is still rising.

Russia’s military: A litany of abuse

Based on the lack of respect for international law by Russian troops in other settings in recent years, which has been met with impunity, Amnesty International says that it is extremely concerned about the likelihood of history repeating itself.

In Syria in 2015 a series of Russian air strikes on residential areas in Homs, Idlib and Aleppo between September and November killed at least 200 civilians. And in 2020, Amnesty International reported that Russian aircraft were targeting both schools and hospitals in Syria, some of which the UN had specified should be protected from any attacks.

In the ongoing conflict in eastern Ukraine, Russia-backed separatist forces violated international humanitarian law by using imprecise explosive weapons in populated civilian areas, as did Ukrainian forces. They also stationed and fired these weapons from homes and civilian infrastructure.

“The history of Russia’s military interventions – be it in Ukraine or Syria, or its military campaign at home in Chechnya – is tainted with blatant disregard for international humanitarian law. The Russian military repeatedly flouted the laws of war by failing to protect civilians and even attacking them directly. Russian forces have launched indiscriminate attacks, used banned weapons and sometimes apparently deliberately targeted civilians and civilian objects – a war crime,” adds Callamard.

Amnesty is also particularly concerned by the prospect of the creation of new militias on Ukrainian territory. Such Russia-backed armed groups in Donbas are notorious for their disregard of the rules of international humanitarian law and lack of accountability, as were the Ukrainian pro-government paramilitaries.

The conflict in eastern Ukraine provoked a full-blown human rights crisis in 2014-15, the consequences of which continue to be acutely felt to this day.

Millions of people were forced to leave their homes, and those who returned or remain in the conflict zone have lived a hand-to-mouth existence, since the region’s economy has been devastated. Hundreds fell victim to extrajudicial executions and other unlawful killings, torture, abductions, enforced disappearances and arbitrary detentions committed by separatist, as well as government, forces.

According to the Ministry of Social Policy of Ukraine, about 1.45 million people are still internally displaced after fleeing the conflict in Donbas and from occupied Crimea.

“It is frightening to imagine what scale the refugee crisis could reach in the event of escalating hostilities in Ukraine. It will be a continent-wide humanitarian disaster with millions of refugees seeking protection in neighbouring European countries,” says Callamard.

“Ukraine is currently the destination for those seeking protection when fleeing from Russia, Belarus and Central Asian countries. Should Russia use military force against Ukraine, this will no longer be the case and they will have to seek refuge in other countries.”

Impact on region and beyond

The conflict will further undermine human rights in the region through the likelihood of protracted guerrilla warfare in Ukraine, accompanied by illicit outflows of weapons, an influx of unaccountable private military contractors, and an overall increase in violence and impunity. The economic devastation and its repercussions for the region, including wider Europe that relies on Russian gas passing through Ukrainian territory, may be huge.

“A further armed conflict in the very centre of Europe involving a nuclear power and potentially drawing in other countries threatens to disrupt the entire system of geopolitical checks and balances with unpredictable implications on human rights globally,” says Callamard.

“If the West and Russia enter into a more bitter confrontation, this could potentially lead to more active intervention of the parties in regional conflicts throughout the world, weaponisation of energy policy, and more countries prepared to use force as part of their foreign policy.”

‘The mother of all sanctions’

Amnesty’s warning comes as the leaders of the United States Senate foreign relations committee said on January 30 that they were on the verge of approving “the mother of all sanctions” against Russia, warning there would be no appeasement of Moscow.

“We cannot have a Munich moment again,” the panel’s Democratic chair, Bob Menendez of New Jersey, told CNN’s State of the Union, referring to the 1938 agreement by which allies ceded parts of Czechoslovakia to Hitler, believing it would stave off war.

There is strong bipartisan resolve to support Kyiv and to punish Russia if it invades Ukraine, Menendez added. Asked if an agreement will be reached this week, he said, “I believe that we will get there.”

The Senate bill would target the most significant Russian banks and Russian sovereign debt, as well as provide more US military assistance to Ukraine.

Some of the sanctions in the bill could take effect before any invasion because of what Russia has already done, Menendez said, including cyberattacks on Ukraine, false flag operations and efforts to undermine the Ukrainian government internally.

The anti-corruption campaigner Bill Browder meanwhile has called on Britain to target Russian oligarchs close to President Vladimir Putin with economic sanctions to halt any invasion of Ukraine.

The US-born financier believes the most effective means of getting the Russian president’s attention is to target his finances and the finances of those closest to him, and that there should be no need for the UK to wait and see if a war ensues.

Photo: Russian troops on exercise in Siberia. (Russian Ministry of Defence/CC BY 4.0).