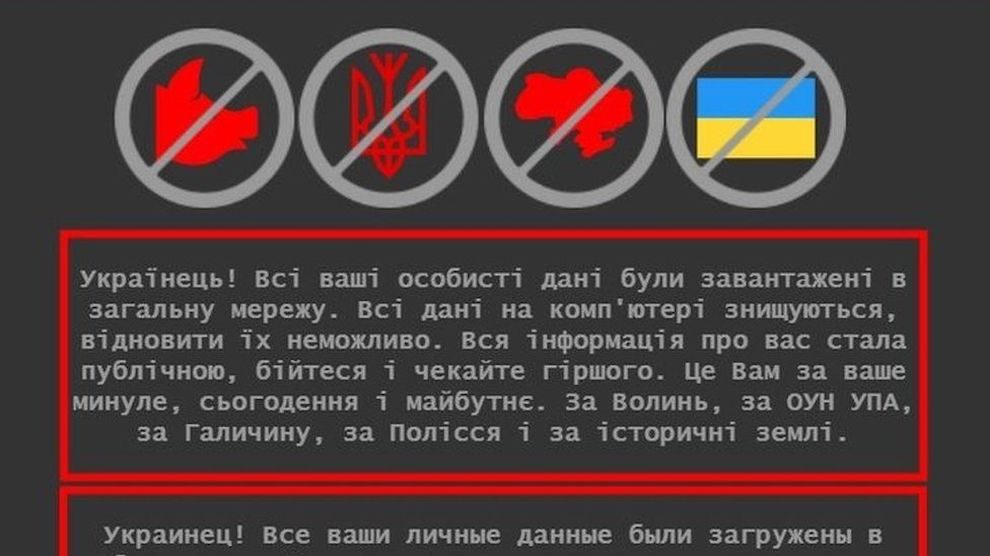 As Russia says it has ‘run out of patience’ with NATO, Ukraine is hit by a ‘massive’ cyberattack.

Ukraine was hit by a “massive” cyberattack on January 14, with the websites of several government departments, including the ministry of foreign affairs and the education ministry temporarily forced offline or vandalised.

Hackers – widely believed to be from Russia, which has a long history of carrying out cyber attacks against neighbouring states – left a message on the foreign ministry website which said: Ukrainians! … All information about you has become public. Be afraid and expect worse. It’s your past, present and future.

“As a result of a massive cyberattack, the websites of the Ministry of Foreign Affairs and a number of other government agencies are temporarily down,” wrote Foreign Ministry Spokesperson Oleg Nikolenko on Twitter. “Our specialists have already started restoring the work of IT systems, and the cyberpolice has opened an investigation.”

According to Anthony Gilbert, cyber threat intelligence lead at Bridewell Consulting, it’s unclear how the attack occurred or who is behind it, but given the current situation it’s highly likely it was politically-charged as there appears to be no financial motivation.

“The attackers probably wanted to give a warning or ignite civil unrest and spread further undercurrents of no confidence in the government,” he said.

The attacks come a day after Poland’s foreign minister, Zbigniew Rau, said that Europe was closer to war than at any time in the past 30 years, and just hours after Ukraine’s ambassador in Washington, Oksana Markarova, told CBS News that her country believed a cyberattack would precede any major military action by Vladimir Putin’s forces.

“If Russia decides on a full invasion, then we know that we should expect increased cyberattacks before that,” said Markarova.

CNN meanwhile has reported that the US has information which indicates Russia has prepositioned a group of operatives to conduct a false-flag operation in eastern Ukraine, in an attempt to create a pretext for an invasion.

An official said the US has evidence that the operatives are trained in urban warfare and in using explosives to carry out acts of sabotage against Russia’s own proxy forces.

A frantic week of talks

Speaking at the launch of the Polish chairmanship of the Organisation for Security and Co-operation in Europe (OSCE), Rau said that for several weeks “we have been faced with the prospect of a major military escalation in Eastern Europe”.

“We should focus on a peaceful resolution of the conflict in and around Ukraine,” Rau added, calling for “full respect of the sovereignty, territorial integrity and unity of Ukraine within its internationally recognised borders”.

His comments came after a frantic week of diplomacy failed to defuse tensions on Ukraine’s border with Russia, where the Kremlin has mobilised more than 100,000 troops in recent months, threatening a new invasion.

In both Geneva and Brussels, Russia demanded Washington halt NATO’s eastward expansion and dismantle military infrastructure in existing Central and Eastern European members of the alliance (primarily the three Baltic states of Estonia, Latvia, and Lithuania).

At his weekly press conference on January 14, Russian Foreign Minister Sergey Lavrov warned that Moscow wouldn’t wait indefinitely for a response, saying he expects the US and NATO to provide a written answer next week. “We have run out of patience,” Lavrov said.

NATO Secretary-General Jens Stoltenberg strongly condemned the cyberattacks against Ukraine and said the alliance would sign an agreement on closer cybersecurity cooperation with Kyiv in the coming days.

“NATO cyber experts in Brussels have been exchanging information with their Ukrainian counterparts on the current malicious cyber activities,” Stoltenberg said in a statement.

“Allied experts in country are also supporting the Ukrainian authorities on the ground. In the coming days, NATO and Ukraine will sign an agreement on enhanced cyber cooperation, including Ukrainian access to NATO’s malware information sharing platform.”

In an interview with Deutsche Welle the previous day, Stoltenberg had reiterated NATO’s commitment to Ukraine, and that the alliance should be “clear-eyed” about the prospect that Russia will — once again — use military force against Ukraine.

“We will provide support to Ukraine to enable them to strengthen their ability to defend themselves,” he said, adding that while there was still room for dialogue, “we’re also prepared if Russia once again starts to use military force against a neighbour.”

Yuriy Vitrenko, the chief executive of Ukrainian state energy giant Naftogaz has meanwhile said that it is absurd for Nord Stream 2 – a pipeline which will deliver gas from Russia direct to Germany, depriving Ukraine of billions of US dollars in transit fees – not to be among the top priorities of international talks with the Kremlin, repeating his call for further sanctions on the gas pipeline to deter another Russian incursion.

Speaking to CNBC, Vitrenko said he had been surprised to see that Nord Stream 2 did not appear to be a central part of the discussions.

“It is really difficult to understand how come it can be unnoticed or it bears no consequences? That is something that should come first, so first they should sanction Nord Stream 2. They should show again their firm stance to Putin,” Vitrenko said.

The US Senate on January 13 failed to approve a Republican bill that would have introduced new sanctions against the pipeline. Democrats instead unveiled their own bill – backed by President Joe Biden – that would impose sanctions on top Russian government and military officials, including President Vladimir Putin, and key banking institutions if Moscow engages in hostilities against Ukraine.