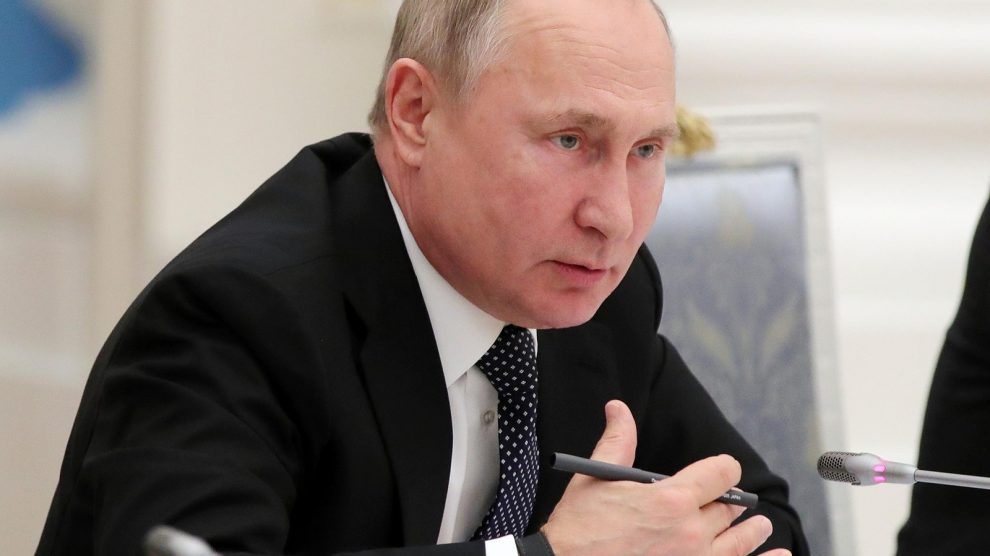 Another week of diplomacy over Ukraine sees US Secretary of State Antony Blinken and German Foreign Minister Annalena Baerbock visit Kyiv, but peace is ultimately a decision for Vladimir Putin.

US Secretary of State Antony Blinken has called on Russian President Vladimir Putin to take a “diplomatic and peaceful path” as fears mount of a new Russian invasion of Ukraine.

“I strongly, strongly hope that we can keep this on a diplomatic and peaceful path, but ultimately, that’s going to be President Putin’s decision,” Blinken told reporters during a visit to Kyiv on January 19, adding that Russia could further increase its military forces on Ukraine’s borders at very short notice.

In remarks to personnel at the US Embassy in the Ukrainian capital, Blinken said: “We know that there are plans in place to increase that force even more on very short notice. That gives President Putin the capacity also on very short notice to take further aggressive action against Ukraine and that, of course, has gotten not only our attention, but it’s gotten the attention of virtually all of our allies and partners; not just in Europe, but beyond.”

While in Kyiv, Blinken met with Ukrainian President Volodymyr Zelensky, who thanked the US for increasing military assistance to his country during “these difficult times”.

Blinken told Zelensky that Ukraine’s future path – including NATO membership – was “up to Ukrainians and no one else”.

Russia has repeatedly denied that it intends to invade Ukraine, most recently on January 19 when the country’s deputy foreign minister, Sergei Ryabkov, said that the Russian troops on Ukraine’s border were conducting training exercises.

Germany ‘will do all it can’ – except supply weapons

Earlier this week, German Foreign Minister Annalena Baerbock also visited Kyiv to meet with Zelensky, where she rejected calls for Germany to supply arms to Ukraine, citing a “historical responsibility” for Germany not to export weapons to conflict zones.

She did, however, say that Berlin would “do all we can” to guarantee Ukraine’s security, and that it was willing to provide technical expertise to help Ukraine defend itself from a new cyberattack, such as that which hit the country last week.

Baerbock – whose Green party has long opposed the Russia-backed Nord Stream 2 gas pipeline – said Moscow would suffer if it launched a new invasion of Ukraine.

“Each further aggressive act will have a high price for Russia, economically, strategically, politically,” she told a press conference.

Zelensky reiterated his stance that Nord Stream 2 is a “geopolitical project”, calling it “a weapon aimed both against our state and against the whole of Europe”.

A day later in Moscow, following a meeting with Russian counterpart Sergei Lavrov, Baerbock said that there was “no understandable reason” for the build-up of Russian troops on Ukraine’s border and that it was difficult “not to see it as a threat”.

She called for the relaunch of the so-called Normandy format, which includes Ukraine, Germany, Russia and France, and which was set up in 2014 to resolve the conflict in the eastern, Donbas region of Ukraine, much of which is still occupied by Russian-backed separatists.

Lavrov meanwhile warned against “politicising” Nord Stream 2, which, when operational, will deliver Russian gas directly to Germany, bypassing Ukraine and depriving it of billion of US dollars per year in transit fees.

The pipeline, construction of which was completed last summer, is still waiting for approval from Germany’s energy regulator.

“[Nord Stream 2] is the biggest commercial project of the last decade, aimed at providing energy security for Germany and all of Europe,” said Lavrov. “Our German colleagues should be careful about the counter-productivity of attempting to politicise this project.”

Lavrov is set to meet Blinken in Geneva on January 21, although US officials have downplayed hopes for any breakthrough.

According to CNN, which claims to have seen the Ukrainian Defence Ministry’s latest intelligence assessments, Russia has now deployed more than 127,000 troops near Ukraine, transferred more Iskander operational-tactical missiles to the border, and increased its intelligence activity against the country.

Russian troops are also currently arriving in Belarus for what Moscow and Minsk say will be joint military exercises, but which Lithuania has said are a “direct threat”.

“In the current situation, we consider the entry of Russian military forces into Belarus not only as a destabilising factor of the security situation, but also as an even greater direct threat to Lithuania,” Lithuanian Defence Minister Arvydas Anušauskas wrote on Facebook.