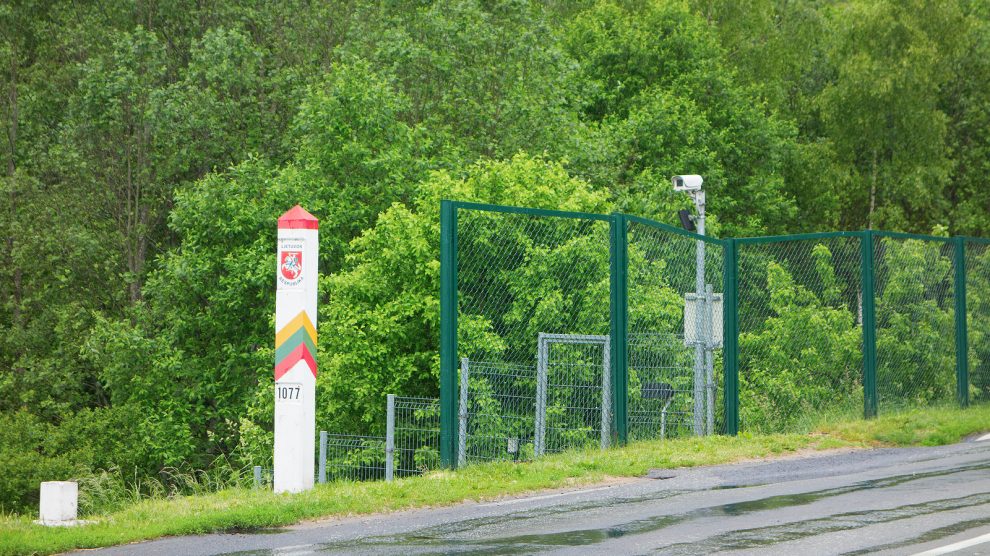 The government of Belarus is becoming increasingly isolated, sealing its borders with Ukraine and Poland while – allegedly – encouraging illegal migration into Lithuania.

Throughout the whole of 2020, there were 81 reported irregular crossings from Belarus to Lithuania.

Since the beginning of June this year, there have been over 1,000, according to Lithuania’s prime minister, Ingrida Šimonytė. The Baltic country has been under a state of emergency since early July to deal with the influx of migrants. Several temporary camps have already been established for detained migrants, most of whom come from Iraq, Syria, Afghanistan and Cameroon.

Agents from the European Union’s border agency have been deployed to Lithuania, and on July 7, Šimonytė announced that Lithuania would begin constructing a barbed wire fence across most of the 680 kilometre-long border with Belarus, at a cost of 41 million euros.

Šimonytė has branded the illegal border crossings a “hybrid attack” ordered by the dictator of Belarus, Alexander Lukashenko. In a press briefing, she claimed that a Belarusian state-owned travel agency was facilitating travel for would-be from countries such as Iraq.

Lukashenko has hardly denied the accusations.

“You [the West] are waging a hybrid war against us and demand that we help you as we did before?,” he said last month.

“You are strangling us systematically and collectively, ruining us, trying to kill our economy and expect us to spend hundreds of millions of US dollars, as before, to protect your geopolitical interests?”

The relationship between Belarus and the West has been strained for decades, but reached breaking point last summer following the brutal repression of protests which followed a controversial presidential election which Lukashenko claimed to win with an implausible 80 per cent of the vote.

Svetlana Tikhanovskaya, who by most objective measures defeated Lukashenko in the election, was forced into exile in Lithuania. Thousands of other opposition figures were arrested, as well as independent journalists. Hundreds have been jailed on spurious charges.

The European Union responded to the initial anti-opposition crackdown with modest economic sanctions targeted at specific leading figures within the Belarusian regime. These were expanded and intensified in May when Belarus hijacked a passenger plane en route from Athens to the Lithuanian capital Vilnius as it flew over Belarus in order to arrest opposition-aligned journalist Roman Protasevich, who was on board.

As a result of the beefed-up sanctions, the country’s biggest exports, such as potash and petroleum, are now directly affected, as are the country’s huge state-owned manufacturing companies.

Lukashenko now appears to be trying to strike back against what he views as an economic onslaught, albeit through much cruder means.

Using migrants as a geopolitical weapon is nothing new: Turkey, having found itself at loggerheads with the EU over much of the last decade, has regularly threatened to allow millions of Syrians refugees residing in Turkey to cross the border into the EU.

In February of last year, following a petty territorial dispute with Greece in the Aegean Sea, Turkey announced that it would not be stopping people from crossing the border into Greece, precipitating a small-scale migrant crisis.

Russia has also been accused of weaponising irregular migration, encouraging Syrian and Afghan migrants to cross to Norway and Finland in 2015 and 2016.

Lukashenko knows that few EU countries have any appetite to deal with another wave of migration. He has also hinted that Belarusian border guards may start to turn a blind eye to drug smuggling – one of the main transit routes for heroin to come into Europe from Afghanistan is through Russia and Belarus.

On the other side of the country meanwhile, Belarus has shut its land border with Ukraine.

Ukraine, like Lithuania, has also been openly providing diplomatic support to the Belarusian opposition, and has become a haven for Belarusian political refugees.

Lukashenko has claimed that Belarus is facing an attempted coup supported by Germany, the United States, Poland, Lithuania and Ukraine. On July 2, Lukashenko announced that “a huge amount of weapons” was regularly arriving in Belarus, from Ukraine, justifying the border closure.

Although no proof has been provided for the weapons claims, the narrative exposes just how much the Belarusian government has become isolated from the rest of Europe over the past year.

Such serious and inflammatory accusations indicate that Lukashenko has given up on the prospect of normalising relations with the EU. As if to underline the point Belarus has also pulled out of the EU’s Eastern Partnership, launched in 2009 with the aim of strengthening and deepening the political and economic relations between the EU, its member states and six Eastern European and South Caucasus partner countries (Armenia, Azerbaijan, Belarus, Georgia, Moldova, and Ukraine)

Just one thing would appear to now interest Lukashenko: hanging on to power. If pushing migrants into Lithuania helps him achieve that, he will lose no sleep.