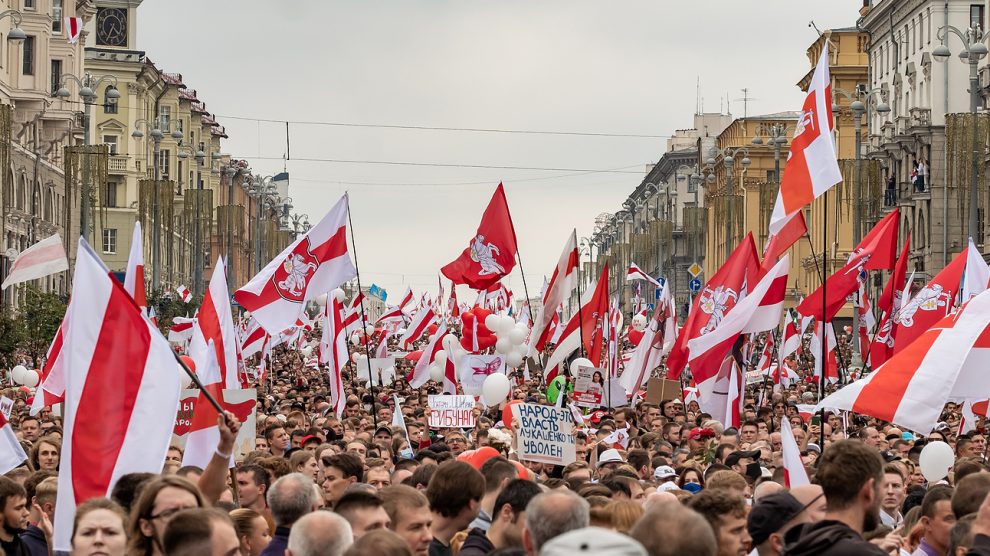 The recent arrest and sentencing of members of the Polish diaspora in Belarus are part of a growing campaign of harassment and persecution orchestrated by the authorities in Minsk against Poles in the country.

It has been more than eight months since scores of Belarusians took to the streets to protest against the result of the rigged 2020 presidential elections and oppose the regime of “Europe’s last dictator”, Alexander Lukashenko.

They have been demonstrating across the country, continuously showing their perseverance and courage, to voice their grievances and demand democracy and freedom.

As a response, the Belarusian authorities unleashed a widespread, brutal crackdown against peaceful protests, using excessive force against demonstrators as well as arbitrary arrests, detentions and imprisonment of Belarusians exercising their human rights. Battered and bruised, subjected to torture and other cruel, inhuman and degrading treatment and punishment, protesters remain defiant despite a ruthless dictatorship and police brutality.

With further escalation of repression against the Belarusian people and deterioration of human rights continuing, targeting the Polish minority in Belarus has been sharply stepped up in recent weeks.

The Polish diaspora in Belarus is relatively large, amounting to over 300,000 people, and it is well-organised. The descendants of Poles, who found themselves in Belarus as a result of border changes after World War II, strive to remember their ancestors and heritage. They continue to cultivate the Polish language, culture, and traditions, also through the membership in such organisations as the Union of Poles in Belarus.

The recent arrest and sentencing of the known Polish activist and Chairwoman of the Union of Poles in Belarus, Andżelika Borys, and the detention of a journalist, blogger and the Union’s member, Andrzej Poczobut, are part of a growing campaign of harassment and persecution orchestrated by the authorities in Minsk against the Polish diaspora.

The latest round of repressions against Poles has been launched with offensive investigations into the Polish educational institutions and an aggressive anti-Polish campaign about history and its false interpretation. And the Belarusian authorities’ provocative and threatening actions against the Polish minority are likely to continue.

The behaviour of the authorities in Minsk is all the more surprising as it violates the centuries-old Belarusian tradition of tolerance and the multicultural character of the country. Belarus prides itself on rich and historic freedom, tolerance and republican traditions dating back to the 15th-18th century Polish-Lithuanian Commonwealth, which were its trademark prior to the country falling under the communist yoke.

Poland will not remain silent

The recent moves by the Belarusian authorities are a part of a series of actions aimed at escalating the political crisis. In a move aimed at weakening bilateral relations, in October last year, 35 Polish and Lithuanian diplomats were expelled from Belarus; a further two Polish diplomats were expelled this month. In a sign of solidarity with Poland and Lithuania, the UK temporarily recalled its ambassador to Belarus last year.

The accusations against Poland – continuously repeated in the official Belarusian media – regarding the alleged Polish threat of terrorism or the promotion of a totalitarian system are preposterous. Poland has always demonstrated its willingness to develop positive neighbourly relations with Belarus; however, it cannot and will not remain silent in the face of an unprecedented wave of persecution and human and minority rights violations.

It is important to bear in mind that the hostile attitude of the Belarusian authorities towards their own society, the Church, the independent media and national minorities is intended only to cover the internal problems which were caused by the authorities themselves, with more than 33,000 people arrested in protests, as well as economic difficulties resulting from contracting economy and deepening recession.

We must not turn a blind eye

Human rights violations in Belarus must end immediately. The authorities in Minsk must respect the international commitment to protection of human and minority rights enshrined in international agreements and conventions, such as the Helsinki Final Act and the Paris Charter, as well as Polish-Belarusian bilateral commitments under the Treaty on Good Neighbourhood and Friendly Cooperation. Minorities have the right to freedom of speech, the right to assemble and the right to foster their ethnic, cultural and religious identity.

On March 25, we marked the Freedom Day in Belarus. We are all witnesses of a momentous time not just in the history of Belarus, but also in the history of Europe. As both a European and international community, we must not turn a blind eye to the plight of the Belarusians.

The United Kingdom has rightly described itself, also in the recently released Integrated Review, as “a force for good”. The dire situation in Belarus, also that of the Polish minority, calls for all the support it can get, especially from countries like the UK, where unwavering respect for basic human rights remains the strong foundation of society.

I, therefore, express my deep hope for and expectation of solidarity from around the world in condemnation of the aggressive actions of the Belarusian authorities. I call upon the international community to join my appeal for the release of those imprisoned, to stop repression of the Polish minority and end the violations of human rights in Belarus.

But what is it about?
Azerbaijan is ready to play its part in the realisation of peace. What about Armenia?
Comment