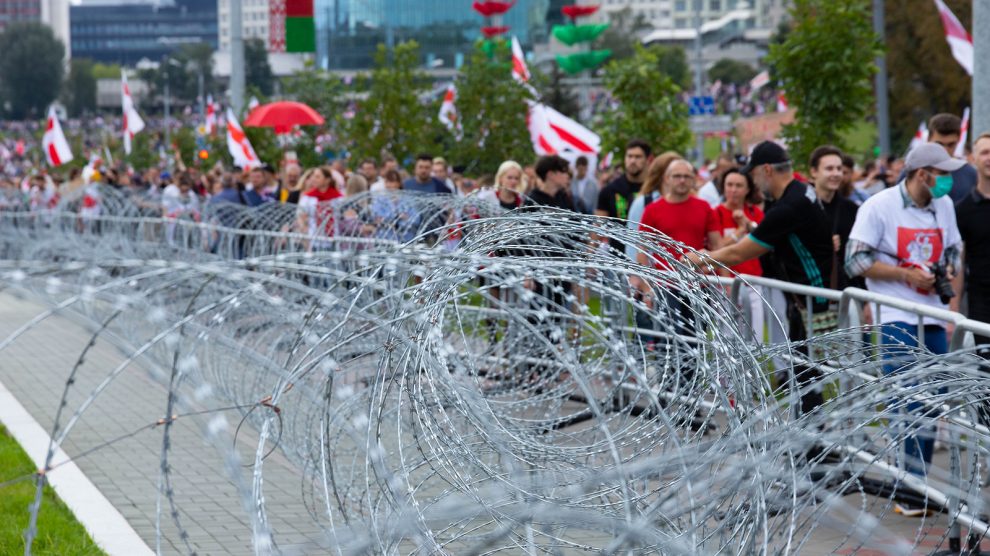 Authorities in Belarus look set to use new “anti-Nazi” legislation to intensify their crackdown on independent media and civil society.

New and amended laws on “combatting extremism” and “preventing the rehabilitation of Nazism” have raised alarm from civil society actors in Belarus, who believe that they could be used to target anti-government opposition in the country.

The warning comes as the leading independent news portal in the country, TUT.by, remains offline following raids by the Belarusian authorities earlier this week.

On May 14, Belarusian President Alexander Lukashenko signed off on laws passed by the country’s parliament described by state-run media as “a complex set of measures meant to counteract attempts to rehabilitate Nazism”, which is understood as “public actions that justify the ideology and practice of Nazism, approve of or deny the crimes committed by Nazis and glorify Nazi criminals and their accomplices.”

The International Federation for Human Rights, an NGO active in Belarus, has expressed concerns that these laws will “severely deteriorate the human rights situation in Belarus” by limiting freedom of expression.

In a statement, the NGO stated its belief that the statutes of the laws are overly vague and prone to interpretation and could be used to “arbitrarily target and silence any undersirable individuals and organisations.”

The passing of such laws is nothing new in this part of the world, where governments capitalise on historical trauma to create legislation that targets any perceived threats to the state.

“Anti-communist” laws in Ukraine and the Baltic states fulfill a similar function. In other parts of the world, “anti-terrorism” laws are regularly used to silence any dissent.

Belarus was one of countries most devastated by World War II. As much as two thirds of the country’s pre-war Jewish population was killed and Minsk’s once-sizeable Jewish community was almost entirely hollowed out.

With the eventual victory over Nazi Germany a large part of independent Belarus’s national identity, the memory of Nazi atrocities continues to take up a large part of the Belarusian peoples’ collective imagination.

And yet because of this, many view the recently passed laws as a cynical attempt to associate any anti-government activity with a grim part of the country’s history.

There has been no shortage of ammunition for the government to paint the opposition as fascists, either. While the far-right had a considerably smaller presence in last summer’s mass protests against the Belarusian government than it did in 2014 in Ukraine, some far-right sentiment does, at times, emanate from leaders of the opposition.

For example, during a rally in the city of Grodno, opposition activist Nikolai Solyanik gave a speech praising Adolf Hitler and saying that Belarusians needed a leader like him.

He was only expelled from the opposition movement after outrage on social media, with opposition leader Svetlana Tikhanovskaya apologising for Solyanik’s “extreme psychological conditions” which led to him being “unable to cope with emotions and [caused him to] express unacceptable things”.

Sergei Dylevsky, a member of the opposition’s Coordination Council, said during an interview with Russian newspaper Novaya Gazeta that “now if you’re a person with white skin, you’re as repressed as the blacks were in the 1950s”.

His colleague, Gleb Sandros, another prominent opposition activist, does not hide his sympathy for Ukrainian Nazi collaborators such as Stepan Bandera and Roman Shukhevych, both implicated in horrendous atrocities against Ukrainian Jews and Polish civilians.

Furthermore, many Belarusian far-right members, who are uniformly anti-Lukashenko, have fought on the Ukrainian side in the war in Donbas, including Sergei Korotkykh, who was granted Ukrainian citizenship in 2014 on decree by former President Petro Poroshenko.

Incidences like these provide fertile ground for the government to use its new and expanded “anti-extremist” legislation to target the entire opposition, the majority of whom, despite standing shoulder-to-shoulder with some far-right elements, do not themselves harbour any such sentiments.

As such, the crackdown on dissent appears to be intensifying. This week, TUT.by, an impartial major news site, was shut down by authorities. That TUT.by – which had a reputation for neutrality and could neither accurately be described as pro or anti-government – has also fallen victim to state repression is understandably cause for alarm.

Furthermore, it is also feared that civil society will be next in line. These fears have been heightened after a notorious prank call to the National Endowment for Democracy by Russians posing as Belarusian opposition figures duped the supposedly impartial and non-partisan NGO into revealing the full extent of its support in organising, financing and encouraging anti-government protests in Belarus.

The presence of far-right and foreign-supported elements within the opposition camp compromises the movement in the eyes of the population and gives ammunition to the government to continue its repression of dissenters, even those who are advocating for objectively just causes.

Although legislation would probably be used to target the opposition regardless of their political affiliations, the passive consent of the wider population – crucial in maintaining any kind of authoritarian rule – is much easier to acquire when there are grounds for the persecution of the opposition.