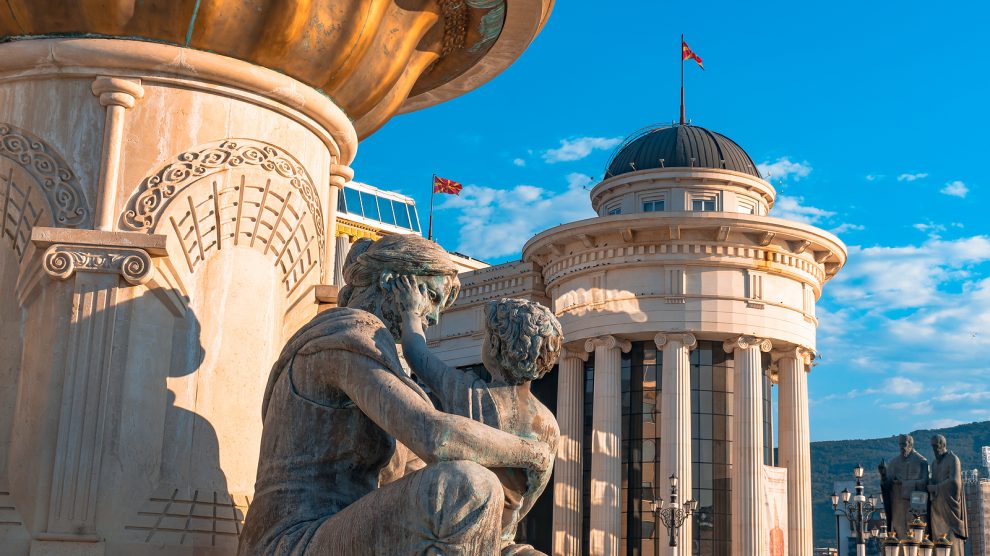 North Macedonia’s path towards the European Union appeared to have been cleared in 2018 when it agreed a deal with Greece to end a 30-year dispute over the use of the term ‘Macedonia’. Now Bulgaria has objections, and its position is increasingly entrenched.

Despite mounting pressure from the European Union, Bulgaria is upholding its veto on the start of accession talks with North Macedonia.

Following a visit to Sofia by the European Commissioner for Neighbourhood and Enlargement Olivér Várhelyi and the Portuguese Foreign Minister Augusto Santos Silva, the Bulgaria’s caretaker foreign minister, Svetlan Stoev, said that no change can expected in his country’s position on North Macedonia.

This despite the two European officials coming to Bulgaria with what was billed as a “compromise solution” to the Sofia-Skopje dispute.

However, Mr Stoev said that the caretaker government – holding the fort until Bulgaria holds a snap parliamentary election in July – is “not authorised” the change the current position.

“It is political naiveté to expect a caretaker government to resolve a bilateral dispute, both because it does not have any political and popular legitimacy to do so, and because the Macedonian question still bears lot of emotional potential for the forthcoming new elections,” says Biljana Vankovska, head of postgraduate studies in Peace and Development at the Faculty of Philosophy in Skopje.

“It should also be taken into account that given the current political situation in Bulgaria – between two parliamentary elections – the main focus is on domestic rather than on foreign policy matters,” adds Rumena Filipova, a research fellow at the Bulgarian Centre for the Study of Democracy think tank.

Bulgaria has been blocking the beginning of the accession talks between North Macedonia and the EU since November 2020 over disputes regarding language, ethnic minorities, and historical issues.

This makes the issue of the existence of the Macedonian minority within Bulgaria a contentious one. Skopje has claimed there are 750,000 ethnic Macedonians in Bulgaria, but the Bulgarian state does not recognise them as a minority.

In October 2020, Bulgaria offered a “compromise” in which it would recognise the Macedonian language and Macedonian identity if North Macedonia accepts that it historically has Bulgarian roots. But this offer was not accepted, and Sofia continues to block the accession of North Macedonia to the EU on the grounds of what they call an “anti-Bulgarian ideology” in the Western Balkans country.

For North Macedonia, it’s not the first time that a neighbouring country has stood in the way of its Euro-Atlantic integration.

A long-standing naming dispute with Greece previously prevented the country from joining NATO and beginning its EU accession process. This dispute was finally resolved in 2018 with the signing of the so-called Prespa Agreement, in which Macedonia consented to change the name of the country to North Macedonia. The agreement was equally unpopular in Greece and in Macedonia, but two years later, in 2020, the Western Balkans nation joined NATO.

Having removed that particular obstacle, however, Bulgaria now stands in North Macedonia’s path.

As part of a Friendship Treaty between the two countries, signed in 2017, a joint commission on historical issues was formed to serve as a forum where the contentious issues could be discussed, but reportedly, its influence and efficacy was limited. So disputes around the ethnicity of certain historical figures such as Gotse Delchev – a revolutionary who fought against the Ottoman Empire – continue, with each side claiming him as their own.

The idea of a separate Macedonian identity among the South Slavic peoples is also historically controversial. After the formation of the Socialist Federative Republic of Yugoslavia in 1945, the region was recognised as an autonomous republic and the “Macedonian question” seemed solved — or at least sidelined. However, following the break-up of Yugoslavia the old disputes began to emerge once again.

Since much of the dispute is tied to the interpretation of historical events and in language and identity politics, they may be very hard to resolve.

“In general, questions of identity require a complicated process of negotiation and reconciliation precisely because deeply ingrained socio-cognitive perceptions are involved and good will on both sides is necessary in order to overcome enemy images,” Ms Filipova says.

“First of all, Bulgarians and Macedonians need to gain greater awareness of trends and developments in their respective politics, media and societies. Also, initiating a deeper bilateral political, economic and cultural engagement can inform friendly relations as part of the EU community.”

Vessela Tcherneva, deputy director head at the European Council of Foreign Relations in Sofia agrees that the two countries need to focus on practical issues.

“Frankly, to me the endgame is somewhere else, somewhere away from those issues. Meaning, I think there need to be a number of very concrete steps on areas which are of practical importance for both countries like infrastructure investment, various exchanges and so on. Those steps paired with a plan, an action plan on how to further work on the realisation of the Friendship Agreement should amount towards the end of the year to a change in the Bulgarian position,” she tells Emerging Europe.

However, Professor Vankovska notes that we may not see a change of the Bulgarian position anytime soon.

“What is far more important in this equation is that Bulgaria does have a long-lasting continuity of certain positions vis-à-vis Macedonia and Macedonians, which even bypasses the transition from communism to liberalism,” she explains.

“These positions have been entrenched, by declarations in the Bulgarian parliament, the overall political and public consensus, and even with support from other actors such as the Bulgarian Academy of Sciences and most of the country’s academia. Also, any ‘international pressure’ is futile or is just a lip-service, because Bulgaria holds the same position as Greece did for almost three decades with the name issue.”

While the issues of identity may seem insurmountable, Professor Vankovska notes that the naming dispute was also once viewed as similarly intractable.

“Let me remind you that the dispute with Greece was at the same time bizarre, counterproductive and against anything that is professed as ‘European values’. The EU did not respect the verdict of the ICJ [International Court of Justice] and preferred real-politics: the pressure was on the weaker side, not on the stronger one, who was also an ally and internal factor within the EU family,” she explains.

Professor Vankovska says that all Sofia needs to do now is wait while North Macedonia, even though it survived the name change, may not be able to survive what Bulgaria is asking from it.

“The dispute may ‘end’ either by another ‘Prespa operation’ where the Macedonian side will again be forced to accept what is at the table or just letting things evolve towards a ‘natural end’ – such as the end of Macedonia as we know it.”

While Bulgaria still seems steadfast in its veto against North Macedonia’s EU accession, there are some signs that a solution to the dispute could be on the horizon. Bulgarian President Rumen Radev said on Tuesday that Bulgaria expects North Macedonia to offer a “roadmap” to begin EU accession talks.

“It’s expected that in the second part of June there will be further movements around the question with Northern Macedonia’s path to the EU,” Mr Radev said after a European Council meeting in Brussels.

On May 27, Germany’s Europe Minister Michael Roth – on a visit to Skopje – also suggested that there is a chance for a breakthrough that would allow for North Macedonia’s EU accession talks to start on June 22.

The slight thaw in the dispute comes at the same time as Mr Radev and his North Macedonian counterpart Stevo Pendarovski completed a two-day joint visit to Rome to pay their respects to Saints Cyril and Methodius, celebrated in both countries.