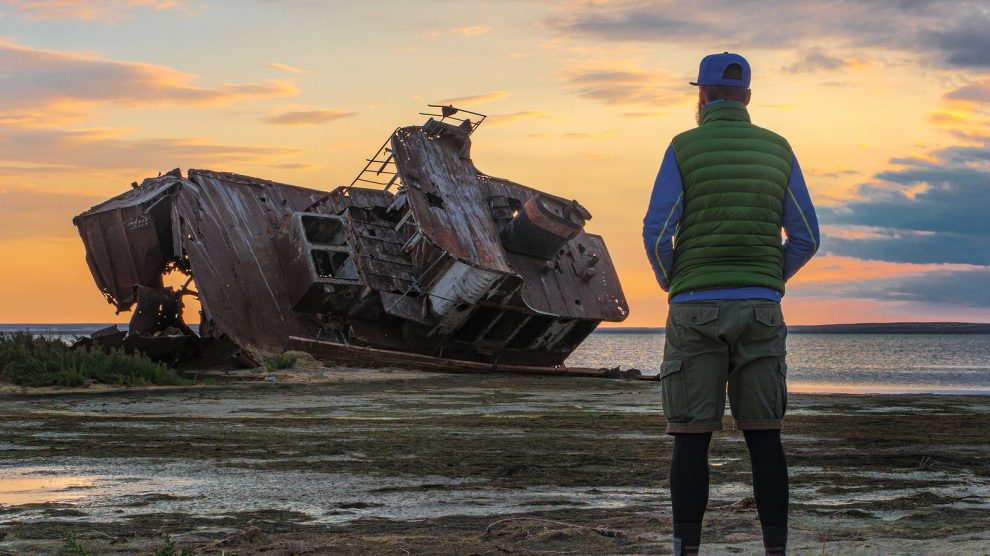 From flowering tree plantations that will grow a beekeeping industry to the restoration of salt-dried landscapes, disruptive innovation could be key to rejuvenating the Aral Sea region.

For decades, however, its size has been greatly reduced as a result of Soviet-era mismanagement, poor maintenance, and the worsening effects of the global climate crisis. Its dusty remains serve as a grim reminder of environmental malpractice and a glimpse into an increasingly water-scarce future.

The damage can in large part be placed on years of Soviet-era mismanagement on a truly monumental scale.

In 1960, the USSR took the decision to use the vast, arid plains of the region surrounding the Aral Sea for cotton farming, a water-heavy crop. Lacking sufficient hydraulic infrastructure, the Soviet state began an immense plan to divert two rivers, Sir Darya and Amu Darya, through a 500 kilometre-long channel to irrigate the cotton fields.

Diverting the rivers – which fed the Aral Sea – deprived the lake of much of its water flow.

By 1980 most of the damage had been done. Just 10 per cent of the original water flow from the two rivers was reaching the lake. By 1989, the lake had split into two, and by 1997 it was just 10 per cent of the size it had been 40 years previously. As much as 95 per cent of nearby reservoirs and wetlands turned to desert, and more than 50 lakes in the rivers’ deltas dried out. By 2014 the eastern part of the sea had completely disappeared.

The future of the Aral Sea and of the people who live in the surrounding region have long been the focus of both environmental action groups as well as the Uzbek and Kazakh governments.

Now, they are turning to disruptive technology to find new solutions.

Last week, the four winners of the Global Disruptive Tech Challenge 2021: Restoring Landscapes in the Aral Sea Region were announced, the culmination of many months of work developing and evaluating the most innovative and cutting-edge proposals for the restoration of the Aral Sea region.

Launched in November 2020, the Disruptive Tech Challenge aimed to identify cutting-edge solutions to address land degradation and desertification challenges in the Aral Sea region. A total of 159 proposals were submitted to the competition from 28 countries across five continents, with more than half of the proposals from Central Asia itself.

The Global Disruptive Tech Challenge is organised with the support of the Central Asia Water and Energy Programme, a multi-donor trust fund financed by the European Union, Switzerland and the United Kingdom. The challenge is administered by the World Bank and informs the Resilient Landscape Programme in Central Asia, currently under preparation. It is implemented by the Kazakh-German University, the Global Landscapes Forum and Plug and Play, a Silicon Valley-based early stage investor, accelerator, and corporate innovation platform.

“Sustainability is one of the biggest trends nowadays and we are seeing a growing need for innovative environmental solutions,” says Mike Zayonc, vice president of Plug and Play. “We strongly believe that the solution to the problems in the Aral Sea can partly be found through entrepreneurship and the involvement of start-ups.

Scaling to a global level

The four winning projects include a landscape restoration process, built on using local sediments and waste materials to stabilise dry salty lands developed by NETICS of the Netherlands. The company’s patented GEOWALL process is designed to prevent toxic soil from being carried by winds away from the damaged Aral Sea basin, a huge problem. Salt from the Aral Sea is found far beyond the region, including in Scandinavia and Antarctica. Every year, winds carry some 150 million tons of salt – often toxic due to pesticides and fertilisers used in intensive farming – from the Aral Sea over hundreds of thousands kilometres.

The Aral Honey Gardens project from Uzbekistan meanwhile envisions planting flowering trees to develop a beekeeping industry that brings about jobs and income, along with reforestation.

Then there is the Tajikistan Women Water Forum’s initiative which empowers rural women through online technologies, mentoring, and training in water and land management. It aims to connect with projects in Kazakhstan, Kyrgyzstan, and Uzbekistan.

The final winner was the Sentinels for Sustainable Pasture Management app by kartECO-Environmental and Energy Engineering Consultancy of Greece and is an online cloud-based system that aims to protect grasslands and reduce rangeland destruction across Central Asia.

“These creative ideas will help to spark a revival in the Aral Sea basin and demonstrate that we all have the power to make significant changes in the world, including confronting the enormous global challenges of climate change,” says Barbara Janusz-Pawletta, vice-rector for international cooperation at the Kazakh-German University.

“We would love to explore investment opportunities among the winning teams and help them scale their solution to a global level,” adds Zayonc.