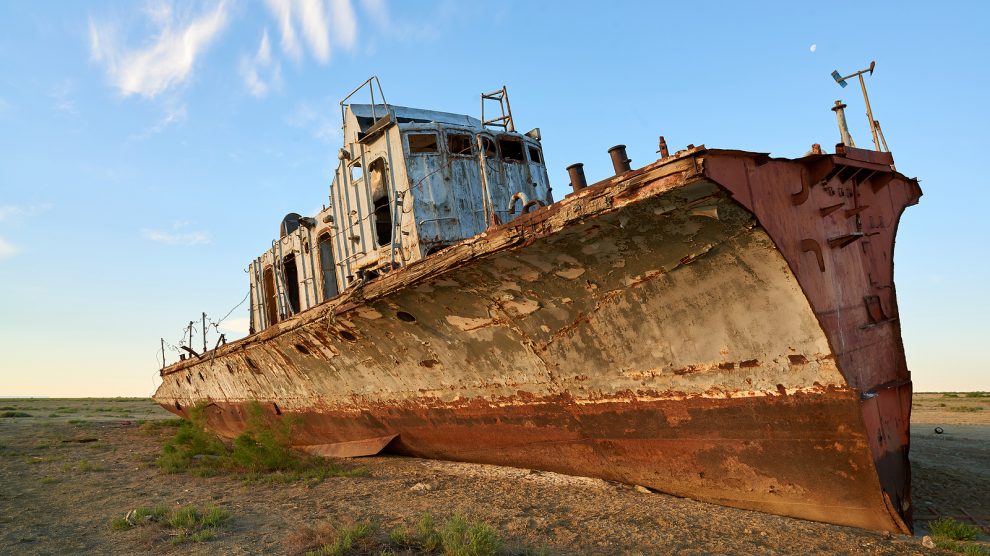 Grassroots environmental groups often have a tough time making their mark in autocratic states. But in Central Asia, there are signs that civil society is finding its voice, raising awareness about the region’s many environmental issues.

The Aral Sea (or what’s left of it) spans the countries of Kazakhstan and Uzbekistan and was once the fourth largest lake in the world. Its shrinking has been described as one of history’s biggest environmental disasters.

The tragedy is arguably the first time the deteriorating environment in Central Asia has caught international attention and concerns have been raised over what local governments and societies are doing to prevent the same harm being done to other important natural formations in the region, such as the Caspian Sea.

Despite environmental awareness amongst Central Asians seeming to be on the rise, the countries’ governments have, perhaps unsurprisingly, decided to adopt an illiberal, top-down approach to addressing the environmental issues affecting the region’s most vulnerable. Vital regional cooperation is still in its infancy.

Since the death of long-time dictator Islam Karimov in 2017, the Shavkat Mirziyoyev government in Uzbekistan has been keen on opening the country up, and following in the footsteps of Kazakhstan in establishing an image of a state that is autocratic, but at the same time outward-looking and cosmopolitan.

Environmental reforms can be a particularly powerful tool for autocratic regimes looking to improve their international standing (and as a consequence increasing funding for their regime), as long as these do not go as far as to threaten regime security.

The Uzbek government is thus one of the few in emerging Europe to produce a report on environmental, social, and governance (ESG) standards the country has been taking into consideration, in a bid to attract funding from environmentally conscious investors.

The 2020 ESG Report includes the country’s plan to increase renewable energy usage, solar energy in particular, as well as progress it has made in improving the condition of the Aral Sea. This mostly consists in utilising funds made available by international organisations, such as the International Fund for Saving the Aral Sea (IFAS) and the European Investment Bank in order to improve outdated irrigation systems and ensuring the reliable availability of water for citizens, according to the report.

The report further mentions the vulnerability of Uzbekistan to draughts and water scarcity. However, while the management of these issues mainly lies in the ability to cooperate with other Central Asian states, the report barely mentions any of its neighbours.

Uzbekistan’s water management is largely dependent on some of its neighbours, because alongside Kazakhstan and Turkmenistan, it is a downstream country, meaning that some of Central Asia’s most important rivers, including the Amu Darya and Syr Darya flow into them from the upstream countries of Kyrgyzstan and Tajikistan.

Owing to their more fortunate location, Kyrgyzstan generates electricity through hydroelectric plants in the Nary river (which merges with the Kara Darya to form the Syr Darya), while Tajikistan has placed dams along the Amu Darya tributaries on its territory. Kyrgyzstan and Tajikistan’s hydroelectric power produces over 50 per cent of their electricity. It has further allowed them to export electricity to South Asia, and the expansion of their agricultural sectors.

Meanwhile, in downstream Turkmenistan and Uzbekistan 98 per cent and 91 per cent of the water supply, respectively, originates outside their borders, making them particularly vulnerable to droughts. This is not a desirable geographical feature for any state, but it is particularly worrying for Turkmenistan where the cotton industry employs much of its workforce, and for Uzbekistan where cotton production is responsible for 76 per cent of its revenue, and are thus heavily reliant on having enough water for irrigation.

Tension, and potential for conflict

The Aral Sea crisis is the consequence of a variety of mistakes spanning decades. However, in Uzbekistan and Kazakhstan, which have suffered social and economic consequences from the presence of dams in Kyrgyzstan and hydroelectric power stations in Tajikistan, there has emerged the exaggerated narrative that upstream states are largely responsible for the near disappearance of the sea, thus creating further tension and aggravating the potential for conflict in the region.

Therefore, while an individual country’s commitment to being environmentally cautious could be beneficial in attracting FDI, in order to truly address the environmental issues that are most threatening the livelihoods Central Asian people, the region’s rule-makers need to improve mutual cooperation and practice fair river sharing.

Uzbekistan’s self-produced 2020 ESG Report further mentions the country’s supposed commitment to supporting “civil society and a strong legal system”. However, the right to truly independent assembly and campaigning within the country remains sketch. There are essentially no grassroots environmental organisations or movements within the state.

One notable exception is the largely independent initiative of Uzbek doctors in raising awareness of the health impacts that the Aral Sea shrinkage has had on the Karakalpak people who traditionally live in proximity to the lake. These included reduced fertility, lung and heart problems, and increased rates of cancer, cases of liver cancer, in particular, doubled between 1981 and 1991.

These were caused by the use of Soviet-era herbicides and pesticides used in cotton plantations and allowed to enter nearby rivers, and then the Aral Sea. The contaminated water caused issues as locals continue to drink it, but the issue was further exacerbated when the lake rapidly dried up and toxic chemicals were left exposed on the sea bed, these were then carried by sandstorms and inhaled.

In slightly more liberal Kazakhstan, droughts have led to organised action for a different reason. Food security is not a fact of life for many in Central Asia, and when the price of food in Kazakhstan spiked exponentially in 2007 and 2013 people protested. These were met with forceful retaliation by the Kazakh government, which was heavily criticized in subsequent reports on the country produced by the Helsinki Committee.

On the other hand, in 2011 a Kazakh movement was formed  and demanded that local authorities stop the development of a ski resort in the Ile-Alatau National Park near Almaty. The petition received considerable support from locals and in April 2019 the Almaty district agreed to put the project on hold until the impact and location can be further studied. A notable win for Kazakhstan’s civil society.

In Kyrgyzstan, scholars have observed that when interacting with international monitoring organisations, political elites tend to blame-shift environmental issues within the country, such as littering, onto the supposedly uneducated rural population which refuses to observe the societal conventions.

Contrary to this perception, environmental participation in Kyrgyzstan appeared to be on the rise prior to the turbulent events of 2020.

The MoveGreen youth environmental movement is spreading awareness and increasing transparency of the environmental issues in Kyrgyzstan, and especially the pollution in the country’s sprawling capital city, Bishkek. Their Aba.kg mobile application informs Bishkek residents details about the quality of their air and has been downloaded by more than 3,000 people.

Supported by MoveGreen, as well as the American University of Central Asia, Kyrgystan’s first independent youth climate forum took place in 2019 and managed to bring together 400 participants. While it is still unclear what Kyrgyzstan’s recent transition of power will mean for the future of politics in the country, but as of now, it does appear that Kyrgyz citizens still hold the most power in potentially challenging any government action that further threatens the natural environment.

Overall, the tragic faith of the Aral Sea has brought the environmental issues of Central Asia to international attention and the region’s leaders are facing increasing pressure to do more to ensure environmental protection. While this could bring about positive effects on the environmental quality in the region, there is a dire need for further cooperation between the states of the region, as well as transparency and a greater plurality of voices being heard in the discussion of issues that disproportionately affect the least fortunate members of Central Asian states.