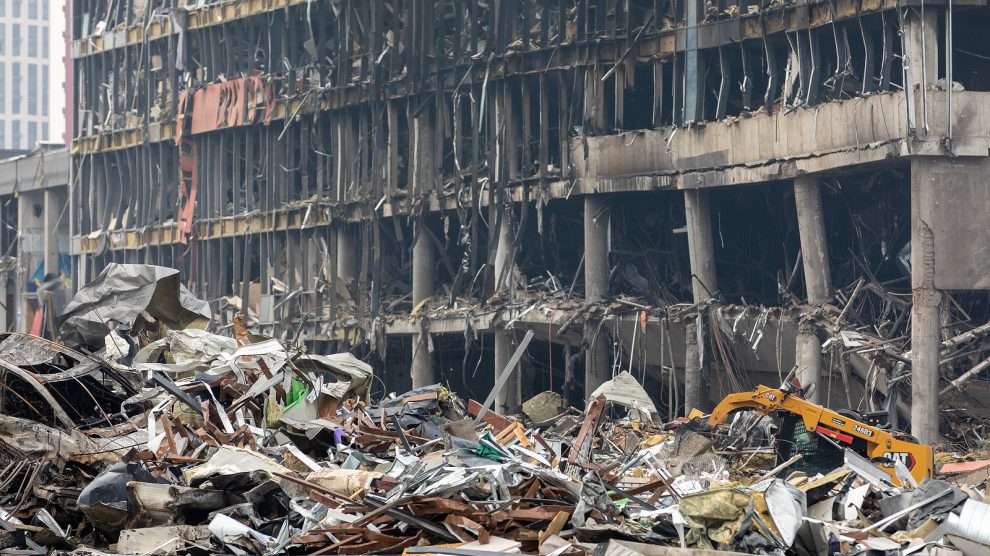 In a highly controversial report, compiled without input from its Kyiv office, Amnesty International has accused Ukrainian forces of putting civilians in harm’s way by establishing bases in residential areas. “This shifts the responsibility from the aggressor to the victim,” says President Zelensky.

Ukrainian President Volodymyr Zelensky has criticised Amnesty International after the human rights group accused his forces of violating international law and endangering civilians in their fight against Russia’s invasion of the country.

In a highly controversial report published on August 4, Amnesty listed incidents in 19 cities and towns in which it says Ukrainian forces appeared to have put civilians in harm’s way by establishing bases in residential areas.

“We have documented a pattern of Ukrainian forces putting civilians at risk and violating the laws of war when they operate in populated areas,” said Agnès Callamard, Amnesty International’s secretary general. “Being in a defensive position does not exempt the Ukrainian military from respecting international humanitarian law.”

According to Zelensky however, the report seeks to offer “amnesty to a terrorist state and shift the responsibility from the aggressor to the victim”.

“There is no premise, even hypothetically, under which any Russian strike on Ukraine becomes justified. Aggression against our state is unprovoked, invasive and terrorist,” Zelensky added in his evening address.

“If someone makes a report in which the victim and the aggressor are allegedly the same in something, if some data about the victim is analysed and what the aggressor was doing at that time is ignored, this cannot be tolerated.”

Ukraine’s Ministry of Defence published a statement saying that its defence systems were in cities to defend against Russian attacks, and that when reports of Ukrainian soldiers committing war crimes had surfaced – such as in 2014 – it had referred itself to the International Criminal Court to allow it to investigate. This, it added, is something Russia has not done.

The ministry also noted that Ukraine regularly evacuates its civilians from cities that come under attack, but that not all citizens want to leave.

“The behaviour of Amnesty International is not about finding and reporting the truth to the world, it is about creating a false equivalence – between the offender and the victim, between the country that destroys hundreds and thousands of civilians, cities, territories, and a country that is desperately defending itself,” said the minister, Dmytro Kuleba, who was later, along with other critics of the report, dubbed a “mob” and “trolls” by Callamard.

In response, Kuleba tweeted: “Apparently, Amnesty calls me a ‘mob’ and a ‘troll’, but this won’t stop me from saying that its report distorts reality, draws false moral equivalence between the aggressor and the victim, and boosts Russia’s disinformation efforts. This is fake ‘neutrality’, not truthfulness.”

Other critics of the report include the US Ambassador to Ukraine, Bridget Brink, who said that, “after 163 days of an unprovoked war the Kremlin started, it should be absolutely clear that Ukrainians are in danger due to Russia’s aggression, the brutality of its forces, and their relentless barrage on cities across the country.”

A gift for Russian propaganda

To pour further scorn on the report, it later emerged that Amnesty’s Ukraine chapter had not been involved in researching or preparing the report.

Oksana Pokalchuck – head of Amnesty International’s Ukraine office – said concerns were raised by her branch about the report, but it was published regardless.

“Already at the initial stage of developing this report, we reached a dead end, where the arguments of our team regarding the inadmissibility and incompleteness of such material were not taken into account.

“For their part, representatives of the Ukrainian office did everything they could to prevent this material from being made public. When our repeated objections were answered with a firm no, we also did everything we could to minimise the distribution of the material,” she wrote on Facebook.

“Every person from the Ukrainian Amnesty office knows that the Russian Federation is responsible for the crimes of aggression against Ukraine. Moreover, a large part of our team are people who personally had to save themselves and loved ones from the war with Russia, leaving everything behind. Some of us have already been displaced or [made] refugees twice,” she added.

Predictably, the Amnesty report has been presented in a positive light by Russia.

Russian foreign ministry spokesperson Maria Zakharova said that Russia had frequently highlighted the methods described by Amnesty and had repeatedly reported that Ukraine is using civilians as human shields.