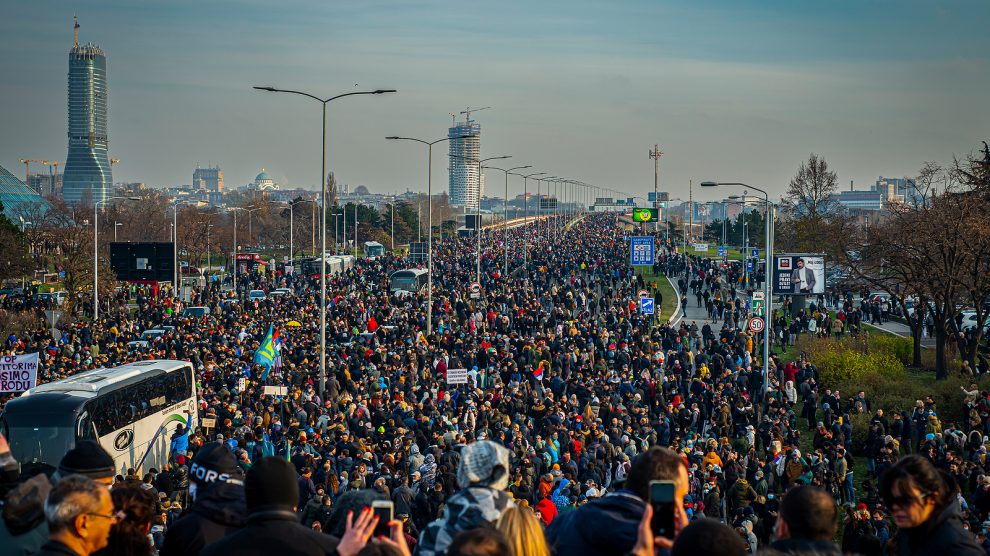 Serbia may be sitting on 10 per cent of the world’s lithium, but the country’s government this week decided it will stay in the ground.

Anglo-Australian mining giant Rio Tinto’s plans to open a lithium mine in Serbia’s Jadar Valley are over, after the government in Belgrade on January 20 revoked the firm’s licenses.

“All decisions [linked to the lithium project] and all licences have been annulled,” Serbian Prime Minister Ana Brnabić told reporters. “As far as project Jadar is concerned, this is the end.”

The move has been welcomed by ecologists who have long campaigned to halt the project, which they view as a threat to the natural environment.

“This is a victory for all citizens who fought against the huge problems that Rio Tinto would have brought to the Jadar Valley. But the fight is not over: Serbia is full of polluters,” said MORAMO, an alliance of Serbian green parties, who have seen a surge in support since the protests against Rio Tinto began, in a statement.

Over the past few months, thousands of demonstrators have regularly blocked key roads in Belgrade and across Serbia in protest against the mine, in which Rio Tinto had intended to invest around 2.4 billion US dollars.

In its own statement, Rio Tinto said it had “always operated in compliance” with Serbian laws and that it was “extremely concerned” by the Serbian government’s decision.

The mine, close to the town of Loznica near Serbia’s border with Bosnia and Herzegovina, had been due to become operational by 2026, but campaigners had repeatedly highlighted a lack of environmental impact studies and the possible negative effects of ore exploitation on their communities.

Possible leaks of tailing ponds, contamination of soil, and disturbances in underground water flows were just some of the potential risks cited.

Rio Tinto first discovered lithium, one of the main components of the batteries used in electric cars, in the Jadar Valley in 2004.

It is estimated that there are 200 million tons of lithium borate ore in the valley, which would make it one of the world’s largest lithium deposits, supplying 10 per cent of global demand.

Earlier this week, Rio Tinto had pushed back its target date to begin production at the mine by a year, to 2027, saying that it fully understood the concerns of some Serbian stakeholders about environmental impact of the project and that it would “continue to engage” to demonstrate the project has developed mitigation solutions.

The Serbian government had until recently been broadly in favour of the project, which would have been one of the largest ever foreign direct investments in the country.

President Aleksandar Vučić last year went so far as to say he was “laughing” at protests against the mine.

The government had not been expected to decide if the project would get the go ahead until after a presidential and parliamentary election set to be held on April 3. The strength of public opinion against the project appears to have forced its hand.

“We listen to our people and it is our job to protect their interests even when we think differently,” said Brnabić.

“Pollution is solved fundamentally and systematically, not as part of the election campaign,” it said.

Pollution in Serbia and the Western Balkans

According to IQAir, which monitors pollution across the world, Serbia is the fifth most polluted country in Europe, behind only Bosnia and Herzegovina, North Macedonia, Bulgaria, and Kosovo. Much of the environmental damage is caused by its dependence on poor quality lignite and coal for around 70 per cent of electricity production.

In July of last year, a report by the Centre for Research on Energy and Clean Air (CREA) and Bankwatch, a network of grassroots, environmental and human rights groups in Central and Eastern Europe has revealed that in 2019 the 18 coal-fired power plants located in the Western Balkans emitted twice as much sulphur dioxide (SO2) than the 221 power plants in the European Union.

The report found that some individual coal power plants in the Western Balkans emit more than entire countries in the EU.

North Macedonia is currently the only country in the Western Balkans to have committed to quitting coal. The country will close its two coal plants by 2027, a date that is compatible with the UN Paris climate agreement.

On December 14, Serbia opened four new EU accession negotiation chapters, one of which was climate change and environment.