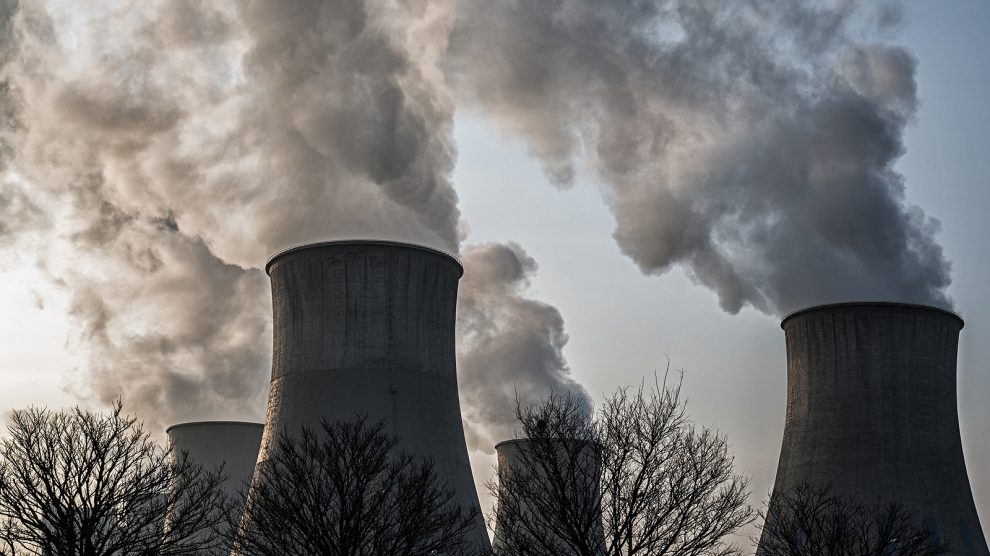 The European Union wants to reduce greenhouse gas emissions by 55 per cent by 2030. Poland is currently threatening to stall legislation that would make the target legally binding.

As part of the European Green Deal, the European Union has set itself the target of achieving climate neutrality by 2050. This requires current greenhouse gas emission levels to drop substantially in the coming decades.

As an intermediate step towards climate neutrality, the EU in 2020 raised its 2030 climate ambition, committing to cutting emissions by at least 55 per cent by 2030.

“A 55 per cent reduction is the bare minimum the EU needs to ensure in its ongoing policy revisions, but Europe should strive for at least a 65 per cent reduction in emissions by 2030 in order to be in line with the [Paris Agreement’s] goal to limit global warming to 1.5°C above pre-industrial levels,” says Klaus Röhrig, EU climate and energy policy coordinator at Climate Action Network (CAN), a global network of over 1,300 environmental NGOs.

The EU is now currently working on the revision of its climate, energy and transport-related legislation under what it calls a “Fit for 55” package in order to align current laws with its 2030 and 2050 targets and ambitions.

The Fit for 55 package is a set of proposals to revise and update EU legislation and to put in place new initiatives with the aim of ensuring that EU policies are in line with the climate goals agreed by the European Council and the European Parliament.

The package of proposals aims at providing a coherent and balanced framework for reaching the EU’s climate objectives, which it says ensures a just and socially fair transition, maintains and strengthens innovation and competitiveness of EU industry while ensuring a level playing field vis-à-vis third country economic operators, and underpins the EU’s position as leading the way in the global fight against climate change.

A chance to show global leadership

For the EU, Fit for 55 is an opportunity for Europe to show global leadership, “by paving the way to a better kind of economy – more sustainable, more inclusive, more prosperous with new opportunities for business,” according to Margrethe Vestager, the European Commissioner for Competition.

Among the legislative proposals included in the Fit for 55 package is a comprehensive set of changes to the EU’s existing emissions trading scheme (EU ETS) that the EU claims will result in an overall emissions reductions in some sectors of 61 per cent by 2030 compared with 2005.

The Fit for 55 package also includes a proposal for a review of the renewable energy directive. The proposal is to increase the current EU-level target of at least 32 per cent of renewable energy sources in the overall energy mix to at least 40 per cent by 2030.

It also proposes the introduction or enhancement of sectorial sub-targets and measures across sectors, with a special focus on sectors where progress with integrating renewables has been slower to date, in particular in the fields of transport, buildings and industry. While some of those targets and provisions are binding, several others remain of an indicative nature.

In addition, it has put forward several provisions to accelerate energy efficiency efforts by member states, such as increased annual energy savings obligations and new rules aimed at decreasing the energy consumption of public sector buildings: it wants all new buildings constructed within the European Union to be zero-emission by 2030 and new public buildings zero-emission by 2027.

Existing public buildings will also have to meet tough new guidelines, something that is likely to be highly problematic for many countries in emerging Europe, although they will be key beneficiaries of a social climate fund worth over 72 billion euros from 2025-2032 period, to be paid for mainly by emissions trading scheme credits in the buildings and road transport sectors.

Poland and Romania will be among the largest beneficiaries (17.6 per cent and 9.3 per cent of total SCF funding respectively), while considering their much smaller population sizes, countries such as Bulgaria (3.9 per cent), Hungary (4.3 per cent) and Slovakia (2.4 per cent) will also benefit quite considerably.

Other proposals include more use of sustainable aviation fuels (advanced biofuels and electrofuels), which have the potential to significantly reduce aircraft emissions. This potential is currently largely untapped as such fuels represent only 0.05 per cent of total fuel consumption in the aviation sector.

The EU also wants reduce the greenhouse gas intensity of the energy used in the maritime industry by up to 75 per cent by 2050, by promoting the use of greener fuels by ships.

While there is little in the package that is new – the proposals aim merely to make existing targets more ambitious – it has been met with a great deal of resistance by some sectors of industry and by member states which rely on fossil fuels for the majority of their power production, Poland in particular, which is threatening to stall it.

The package must be approved by both the European Parliament and the European Council – and the Commission wants to push through the votes during the first part of 2022.

Polish Minister for Climate and Environment Anna Moskwa in December that the key elements of the package must be adopted unanimously, and that, “of course, if it runs counter in any way to the interests of Poles and the just transition guidelines, we’ll take any legal action to block it.”

Klaus Röhrig says that while Poland can’t veto the Fit for 55 package – it is subject to qualified majority voting and does not require unanimity – it is clear that the Polish government by aiming to stall the entire process around the package.

“It is not climate policy that is causing social disruptions, but the failure of governments to act against the climate crisis and to manage the transition in a socially fair manner. Poland’s attack on the package is a distraction from the fact that it is far behind other countries in decarbonising its energy mix,” he tells Emerging Europe.

Poland’s argument is that the revised targets are too ambitious for a country that lags behind the rest of the bloc in weaning itself off coal.

In 2020, Poland generated 70 per cent of its electricity from coal. Poland was responsible for 30 per cent of total EU electricity generation from coal in that year, and this is projected to rise to 63 per cent in 2030. Poland has brought several new coal plants online in recent years and has refused to halt the expansion of the problematic Turów lignite mine, currently the subject of a major dispute with the EU and neighbouring Czechia and Germany.

The Czechs want the mine, which is owned by the Polish state-controlled energy company PGE and located near the Czech border, closed owing to fears that it has an adverse effect on groundwater in the region.

Last year, the Czech government took Poland to the Court of Justice of the European Union (CJEU), and in September 2021, the court imposed a daily fine on Poland of 500,000 euros for failing to suspend operations at the mine.

Poland has so far refused to pay, and in response, the EU is now preparing to withhold budget payments.

During last year’s COP26 summit in Glasgow, Poland signed up to the Global Coal to Clean Power Transition Statement but later backtracked on agreeing to a coal exit in the 2030s by confirming it would exit coal by 2049 – just one year before the EU is due to reach climate neutrality.

“With the ink of her signature not even dry on the 2030s coal phase out commitment at COP26, Polish Minister Anna Moskwa underscored that her government cannot be trusted to sign a postcard, let alone a responsible climate pledge,” says Kathrin Gutmann, campaign director at Europe Beyond Coal, an alliance of civil society groups working to catalyse the closures of coal mines and power plants, prevent the building of any new coal projects and hasten the just transition to clean, renewable energy and energy efficiency.

But Poland is not alone in persisting with coal. While it is the only EU member from the emerging Europe region yet to set a binding date for a coal exit, only two have set dates that meet the 2030 target: Slovakia, which will exit coal in 2030, and Hungary, whose exit date of 2025 is the most ambitious in the region.

The three Baltic states of Estonia, Latvia, and Lithuania have no coal in their energy mix.

As more CEE countries embrace Taiwan, the 3SI could be key to even greater engagement
Peace in Ukraine is Putin’s decision to make, says US
Comment