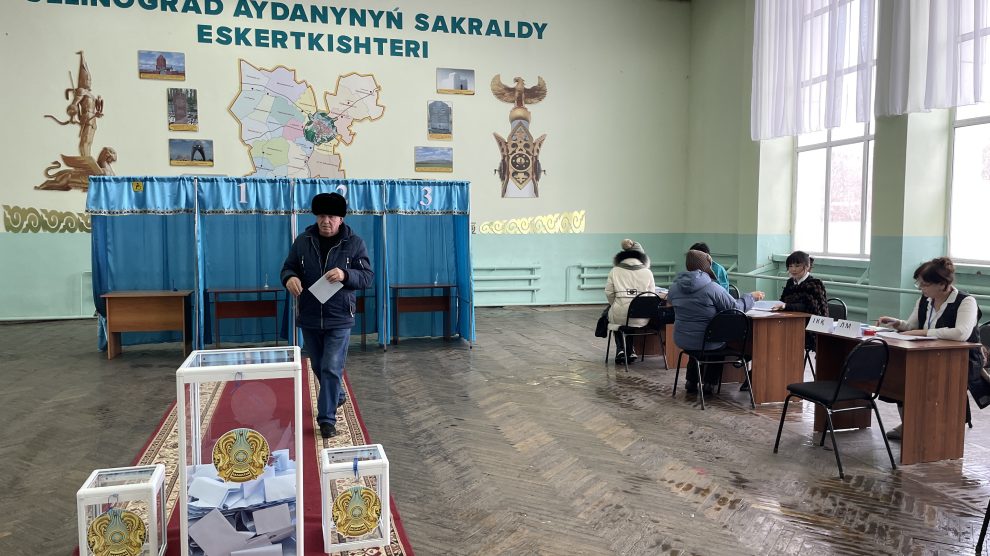 Sunday, November 20, was presidential election day in Kazakhstan — exactly ten months after a nationwide spate of protests which began over a spike in fuel prices and ended in bloodshed, with more than 230 people dead and Kazakhstan’s government forced to call in troops from a Russia-led security bloc.

The election also came five months after 77 per cent of voters backed wholesale changes to much of the country’s constitution in a referendum.

But in the capital Astana, whose name was just recently restored, three years after President Kassym-Jomart Tokayev renamed it in honour of his predecessor, Nursultan Nazarbayev, there is little election fever.

Dimash Alzhanov, a participant in the Oyan Qazaqstan (Wake Up Kazakhstan) Movement says the constitutional amendments approved in the referendum “lacked political substance” despite the president’s pledges to reduce his powers, balance the political system, and empower parliament.

“Instead of reforming the political system, Tokayev used the referendum to gain public support, increase his legitimacy, and appease protestors.”

However, according to the country’s state counsellor Erlan Karin, the referendum was “not a direct response to the January events. Reforms were ongoing already.”

Regardless, following the referendum, the administration masterminded the concept of a fairer, more open Kazakhstan, and in early September, President Tokayev announced he would seek a democratic mandate to implement the vision. “As my country heads to the polls in the coming months, I believe we must resist the instinct to turn inward amid these turbulent global times,” he wrote in an op-ed, published in Politico.

A day before the election, on what is called ‘silence day’, when no formal campaigning is allowed, I had an opportunity to visit the headquarters of four presidential candidates, including the incumbent’s.

And while the atmosphere in the ruling big-tent Amanat party’s office was vibrant with a large campaign team, a dozen TV crews recording the visit of over 40 international analysts and journalists and the party’s executive secretary Askhat Oralov doing his best to make an impression on his audience, the other candidates (or their representatives) hosted us in somewhat random circumstances in places that did not reflect the dynamics of an election campaign. Most of the candidates explained that they had had too little time to run a proper campaign.

On Sunday morning the two polling stations that I visited — one in the capital and one in a rural area 50 kilometres from Astana — seemed orderly and calm. I was immediately struck by a specially designed voting space for the disabled, an overview of all the six candidates’ biographies and, most importantly, the two female candidates, and relatively big groups of local observers.

International observers who shared their impressions of the elections during briefings taking place at the Centre for Assistance to International Observers made similar points. None of those I asked, however, said they were confident that the election process was similar across a country that has an area of over 2.7 million square kilometres. It doesn’t mean they were not — it was surprising that they focused on the capital city, where the turnout was the second lowest in the country after Almaty, 48.6 per cent and 28.72 per cent respectively.

The proportionally low turnout in the two main cities, unlike across the country where 69.44 per cent of all citizens eligible to vote visited the polling stations, is not surprising.

“It is those who work in the public sector, including teachers, that are expected to vote and they are sometimes asked to take photos of themselves at the polling station to prove they did,” a young start-up founder who decided to stay at home on Sunday tells me.

“I didn’t vote because with the verhushka in power nothing is going to change. We just say we are a democracy, but we are not,” a taxi driver says in simple English when giving me a ride to the EXPO complex.

“I focus on my business activity and hope whatever happens will not affect that,” another start-upper, educated in the US and the UK, who didn’t vote either, tells me.

A young female entrepreneur running a successful international business tells me over dinner that she did vote but selected the “against all above candidates” option available on the ballot as she felt none of the six represented her own views.

Those who probably would have represented her were not eligible to run. Several international observers as well as a recent OSCE Office for Democratic Institutions and Human Rights (ODIHR) report said that candidate eligibility and registration requirements were quite restrictive as only those who are above 40 years of age, party members and with five years’ experience in public administration could appear on the ballot.

One of the two female candidates that I had an opportunity to meet, Saltanat Tursynbekova, an attorney, activist, colonel, a deputy chairman of the National Commission on Women’s Affairs and Family and Demographic Policy, admitted that two female candidates on the ballot seemed quite unusual. I would add that not only for a Central Asian country, but also for much of Europe.

As a human rights activist, she believes that the Kazakh parliament, which is primarily male-dominated, “has a 30 per cent quota for women and young people and that quota limits the representation of women”. With an increase of violence against women and children more female representation is necessary, she adds.

The mood expressed by the younger generation, aware of what their lives could look like elsewhere, either through their own experiences when studying abroad or through social media, was perhaps one of the reasons that during my visits to polling stations I mainly witnessed middle-aged and elderly Kazakhs casting a vote.

Overall, Tokayev received 81.31 per cent of all votes. As many as 5.8 per cent of Kazakh citizens chose the “against all the above candidates” option — more than for any other candidate.

In his nation-wide address in September, Tokayev emphasised the need to ensure “macroeconomic stability, economic diversification, digitalisation, and development of small and medium-sized businesses, human capital, and the rule of law.”

He also said that “a fair distribution of national wealth and equal opportunity for every citizen is a key goal of our reforms.” […] “People are tired of empty declarations and endless presentations of a bright future. Citizens expect government agencies to actually fulfill their promises, not just in theory. Emphasis should be placed on decentralising the system of state administration while increasing the personal responsibility of political officials.”

Dr Erica Marat, an associate professor and chair of the Regional and Analytical Studies Department at the College of International Security Affairs, says that “for Kazakhstan to become a fully-fledged democracy, the people at the top need to be willing to give up power and to allow more voices to compete in the form of political party participation and competitive parliamentary and presidential elections. But the whole system since the Soviet Union, since Nazarbayev, always wanted to prevail without much competition. Unfortunately, they continue to think that most of the population supports what they call stability.”

As per the amended constitution, Tokayev will lead the country for the next seven years. Add in three years already served, and should he see out his term he would have been the country’s leader for a decade.

Dr Marat believes that despite Tokayev’s new mandate, the problems that existed before January 2022 have not gone, and that just about anything could spark further protests.