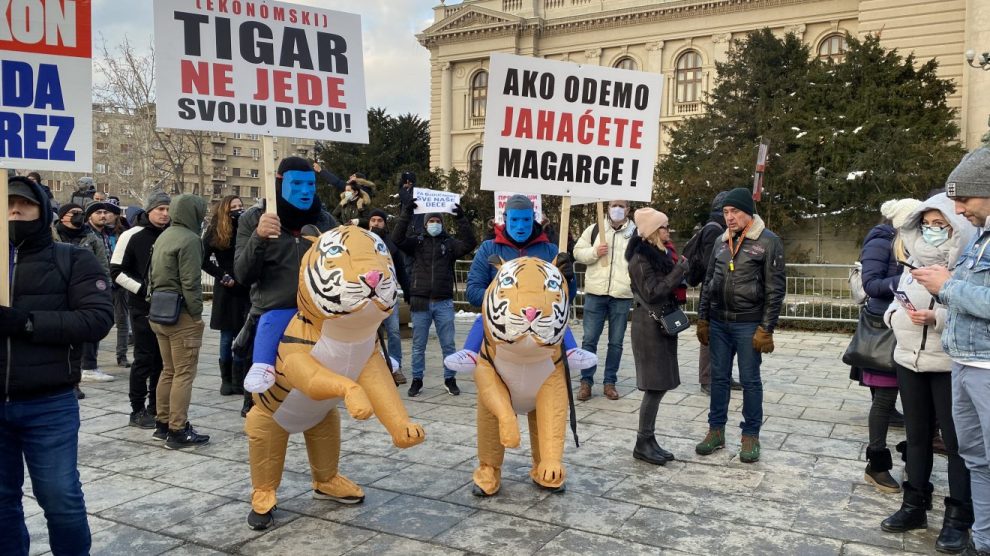 Around 100,000 people in Serbia make a living as freelancers, many by offering IT services to foreign clients. New tax rules threaten their livelihoods, forcing some to protest on the streets of the capital Belgrade.

In January, several thousand freelancers and internet workers took to the streets of the Serbian capital Belgrade to voice their discontent over high tax burdens and retroactive demands for payment of debts going up to back five years.

In the wake of the protest, the country’s government began negotiating a solution with the Association of Internet Workers (URI). With these talks having now broken down without a resolution, the freelancers are back on the streets.

On April 7, several dozen freelancers camped in front of the parliament building in Belgrade and were joined the following morning by hundreds more.

In the meantime, the government’s proposals to end the dispute – which the freelancers reject – will be debated in parliament on April 21.

If the proposals become law, freelancers will be exempt from paying tax on income up to the minimum wage of around 270 euros. Beyond that, there will be a tax deduction 43 per cent for “operating costs”.

The new rules in effect mean that those freelancers whose average income is around 470 euros per month would actually end up having no tax to pay at all.

However, the URI say the proposal does not solve their problems.

The organisation points out that the new rules would only apply until October of this year. After that, the operating cost deduction will be removed and tax-exempt income reduced from 270 euros to 155 euros.

Additionally, people with outstanding tax debt, for which the government has offered a 10 year rescheduling deal, will have to make two monthly payments: their current taxes, and payment of their debts.

According to the URI, these changes show that the Serbian government has no actual desire to legally regulate the status of freelancers. As the organisation sees it, freelancers who earn between 500 and 1500 euros per month will have to stop working as they will be unable to service their obligations to the state.

Freelancers say that it’s clear that the government would prefer to move them to self-employed status where they would pay a flat tax each month. But there are two reasons why this doesn’t work for many.

The first is that many freelancers don’t make enough per month to pay the flat tax, while the second is that recently adopted regulatory changes over who can actually be considered self-employed disqualify many, especially those who only have one client.

In October of last year the Serbian tax authorities warned freelancers who had received payments from abroad that they must self-report and pay taxes for the last five years or face enforced collection with high interest rates.

But, as many of the freelancers and the Association of Internet Workers pointed out, regulatory confusion caused many such individuals to believe that they didn’t have to pay anything.

Stories emerged of people asking their local tax authority how to proceed with regulating their tax obligations only to be told they don’t have to pay unless they cross a certain threshold.

Legally, however, the threshold didn’t exist. Every instance of income should have been reported and income tax as well as mandatory social and health insurance paid.

This has left many Serbs who make their living online with debt they are unable to pay. Even with the debt rescheduling programme that the government has offered, the installments – on top of current tax – may put many out of business.

The freelancers are therefore demanding that their status should be legally regulated and that any tax debts accrued before October 2020 written off. The government has so far refused to agree to these terms.

Miran Pogačar, the leader of URI, has called on the government to get back at the negotiation table and pull the draft law.

Prime Minister Ana Brnabić said last week, following the latest protest, that she is ready to continue the conversation but “without ultimatums”.

Moldova’s president must wait a while longer before she can call a snap election
Kyrgyzstan votes for a new constitution. What changes?
Comment