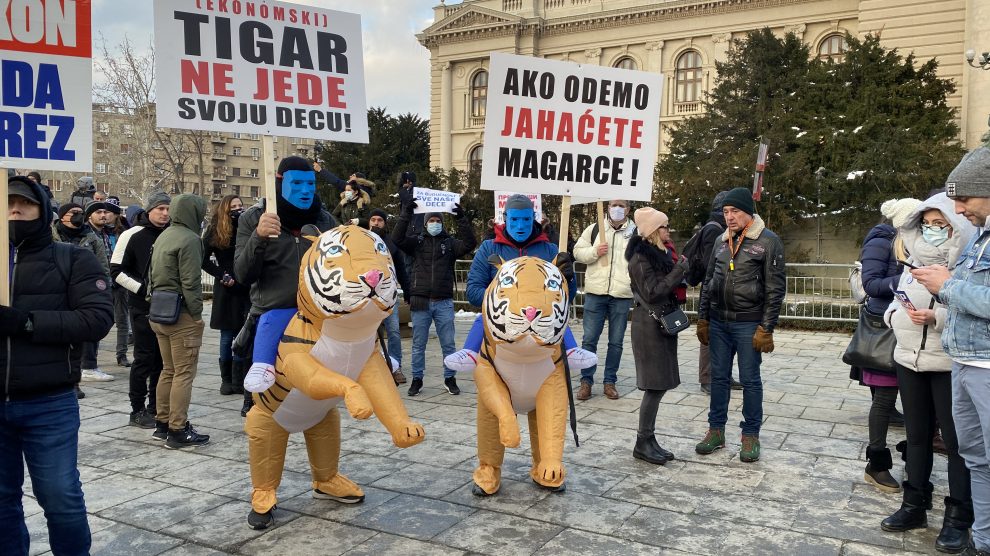 Several thousand freelancers protested on January 16 in front of the National Assembly in Serbia’s capital Belgrade over what they say are unfair tax burdens.

Last November, Serbia’s tax authority publicly called on the country’s freelancers (mostly remote workers invoicing foreign clients, especially in the IT sectors, but also YouTubers and other influencers) to pay what they owe in back taxes for the last five years. Many are currently the subject of a major tax control operation.

Throughout December, freelancers began receiving summonses to attend interviews with tax inspectors, as well as notifications from the state tax authority as to how much in back taxes they owe.

The freelancers – many of whom protested in front of the National Assembly in Serbia’s capital Belgrade on January 16 – object both to the amount of these taxes and what they see as unfair treatment: freelancers do not have the same legal rights as ordinary workers, such as limits on overtime, a set minimum wage, and the option of forming unions.

They are now asking for a new legal framework to be created that would take into consideration the specific conditions for this type of work.

“The obligations of internet workers should begin from the moment a new law is made that would precisely define the rights and obligations of freelancers,” Miran Pogačar, the president of the Association of Internet Workers (URI), said during the protest.

According to Mr Pogačar, the two main demands of the freelancers are that taxes should be lower, at 10 to 14 per cent, as in neighbouring countries, and that the retroactive payments for the last five years, which are also subject to interest, should cease.

“We hope that after this protest, the institutions will realise that the best way forward is for them to negotiate with us so that the problem could be solved in a way that will benefit both us and the state,” Milica Dragićević, a member of URI told Emerging Europe before the protest.

The protest seems to have worked, as only thirty minutes after it began, the association received word that negotiations with the prime minister, Ana Brnabić, the finance minister Siniša Mali, and the director of the tax adminstration Dragana Marković would be held this week.

Who are the freelancers and why are they unhappy?

For many freelancers in Serbia, the biggest question is how – in a country that touts its commitment to digital transformation and IT – did some 100,000 people who make their living online fall through regulatory cracks?

The term “freelancer” recently took on a new meaning in Serbia in the context of a law that requires “internet workers” – the term preferred by the URI – to declare their income and pay taxes within 30 days of remuneration. If the freelancers are not salaried employees they must also pay health and pension insurance.

Once everything is accounted for, freelancers claim that they would be left with around half of the income they receive. However, those who do not pay on time must also pay interest. Members of the URI have claimed that once interest is taken into account, the total amount owed to the state can reach up to 80 per cent of income over the past five years.

Why haven’t the freelancers paid on time?

Regulatory confusion, along with practical realities of working online seem to be main reasons why most freelancers did not pay taxes and why a number of them are now saddled with crippling levels of debt.

While a legal form of self-employment called “entrepreneurship” in the Serbian tax code could have worked for some, a lot of freelancers were not making enough money for this to be viable.

Many of the freelancers only made income sporadically, by working via various online freelance platforms. Some taught English online to pupils in Asia, and some worked for only one client (essentially employed by a foreign company) on jobs such as virtual assistants.

For those with only one client, the question of registering as self-employed became moot in early 2020 when changes to the law made it uncertain if they would pass the so-called “independence test”. Working for just one client is one of the criteria through which the test can be failed. Failing the test results in additional tax obligations as well as fines.

Some members of URI additionally claim that they did indeed try to self-report their income and pay taxes only to be turned away by their local tax authorities with information that turned out be incorrect, such as that they only need to pay taxes if their incomes go beyond a certain threshold.

Turned away from paying taxes

Such is the case of Vladimir Ilić a freelance programmer from Petrovac na Mlavi, who says he attempted to regulate his legal status with the tax administration for years, but was always told this was impossible.

According to Mr Ilić, he was told that he only needed to pay a yearly tax if his income exceeds six times the average yearly wage in Serbia. He says that he did so in 2016 but only after having to insist on paying and calculating the taxes himself, as the workers in the local tax administration did not know how to do it.

Mr Illić additionally claims that he was mocked by those same tax administration employees for paying.

“They even told me, you must really love Vučić for paying this tax,” he says.

When he attempted to pay taxes again in 2017, he was told that he is “not on the list of tax subjects” and that there is “no tax obligation”.

Despite all this, Mr Ilić has now been ordered pay six million Serbian dinars (around 51,000 euros) in tax and interest for the last four years of income (which totaled eight million dinars; around 68,000 euros). He says he has no way of actually paying. Mr Ilić suffers from multiple sclerosis and says that the recent events have caused his health to decline.

Two days before the protest, President Aleksandar Vučić said that “protests won’t solve anything” and that “taxes must be paid”.

However, he did state that “there is room to discuss from when to pay taxes”, and he appealed for the government to accept talks with the representatives of the freelancers.

The outcome of these talks remains uncertain.

“If they don’t accept our demands, we’ll go out into the streets again,” says Mr Pogačar.