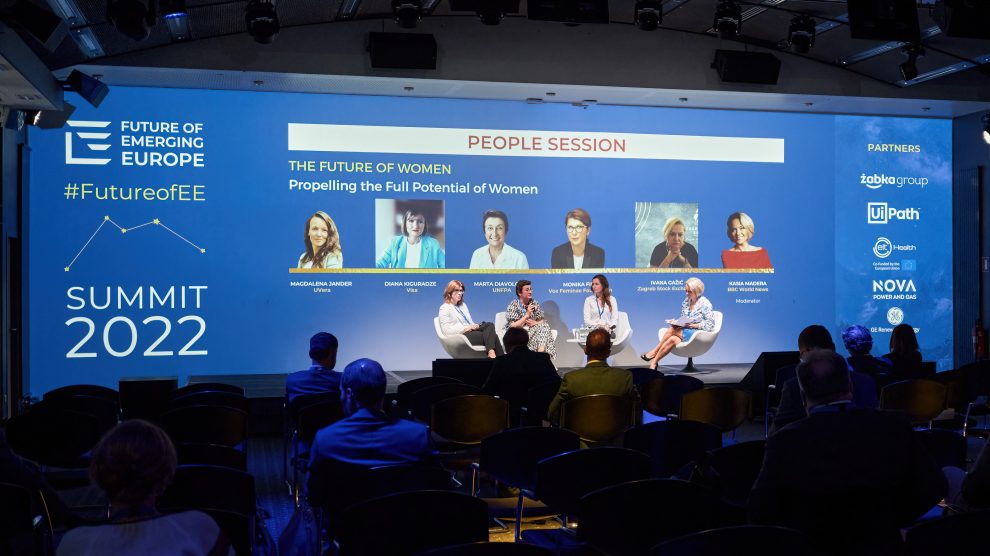 Emerging Europe does not want for talented women. But despite much progress made towards gender equality, they still face obstacles men do not. Quotas offer a solution.

Many of the countries of emerging Europe have a proud history of empowering women: in education, in business, in politics, in society. However, this is not true for the entire region, and even in some hitherto more progressive countries a resurgence in what often gets referred to as “traditional values” threatens many gains of the past.

Much of the regression has been brought about by the region’s demographic decline. In many countries, leaders fear the impact on their economic and political goals of women choosing to have fewer children.

A major report published last year by the UK charity Population Matters detailed how predominantly right-wing, populist and/or nationalist administrations are stigmatising women who choose careers in the business world, portraying any decision to have smaller families — be that decision linked to their career or not — as unpatriotic. Titled Welcome to Gilead, the report raised serious concerns about the abuse of reproductive rights by these governments, echoing the pronatal dystopia of Margaret Atwood’s The Handmaid’s Tale.

But regression has not merely been limited to reproductive rights.

In business and politics too, women remain underrepresented, and face barriers to entry that simply do not exist for men. It has raised the question of quotas for women, in offices, on company boards, in parliaments. It is a subject that divides opinion – even among women – but quotas increasingly look inevitable.

“Since the situation in the world I work and participate in, economics, politics and everything else, didn’t go forward — it actually went backwards in the last 10 years — I think quotas are inevitable,” says Ivana Gažić, the CEO of the Zagreb Stock Exchange.

“They will enable women to get the right training, to find the right way forward and to take the positions that they are able and competent to hold.”

Magdalena Jander, CEO at Uvera, agrees. “Where they currently exist, C-level quotas should be kept,” she says.

Gažić and Jander were speaking at an all-women session of the Emerging Europe Summit and Awards, held in Brussels in June, dedicated to propelling the future of women. Gažić went on to say that she has noticed that “soft quotas” are being imposed by investors.

“It’s a trend. Investors are starting to ask companies questions. They have realised that a male-dominated board tends to take more risks in crisis situations.”

It may not yet be a trend that has taken root everywhere, however.

Data backs up her statement. Start-ups in Central and Eastern Europe founded by women raised just one per cent of total investment in the region in 2020, according to report commissioned last year by European Women in VC, Experior VC and Unconventional Ventures.

Of most concern is that progress in the area of female-founded start-up funding has been flat over the past five years. Since 2016, all-women teams have attracted on average just two per cent of total start-up investments.

There are a few encouraging developments, however. In the Baltics and the Balkans countries have produced a higher percentage of women-founded and co-founded start-ups than some established European tech ecosystems. Estonia in particular stands out with 3.2 per cent all-women and 13.7 per cent mixed founders, placing it second in Europe after the United Kingdom.

Balkan countries have also performed well when it comes to the proportion of venture capital that ends up in the hands of women and mixed-founded companies. At 5.9 per cent for women-founded and 9.6 per cent for mixed-gender teams, the Balkans are an absolute leader in Europe, beating out Germany, the United Kingdom, and Sweden.

Monika Fill, president of Vox Feminae Foundation, suggests however that quotas – in the business world at least – could be counterproductive.

“I believe business-led solutions would be better for long-lasting change,” she says, but adds that quotas can be “very efficient” in political life, “because then we are sure that the parliament reflects the population it represents.”

According to the Inter-Parliamentary Union, which monitors the gender balance in parliaments across the world, as of May 2022, just three countries in the region had female representation above 40 per cent: North Macedonia, Belarus, and Serbia. The region’s worst performer is Hungary, where just 13.7 per cent of MPs are women.

Marta Diavolova, deputy regional director at the United Nations Population Fund (UNFPA), says that all organisations – irrespective of whether it is a business or parliament – need to have in place a very strong commitment to parity. “There needs to be diversity in the room, at all levels of the organisation,” she says.

If quotas are needed to bring that about, so be it, appears to be the consensus.

“Quotas are healthy, and are part of international agreements to eliminate discrimination against women,” adds Diavolova. “Quotas eliminate barriers that are historically inherited by marginalised women vis-à-vis men.”

Magdalena Jander, Marta Diavolova, Monika Fill, Diana Kiguradze, and Ivana Gažić spoke with the BBC’s Kasia Madera at the recent Future of Emerging Europe Summit and Awards. You can watch the full discussion below.