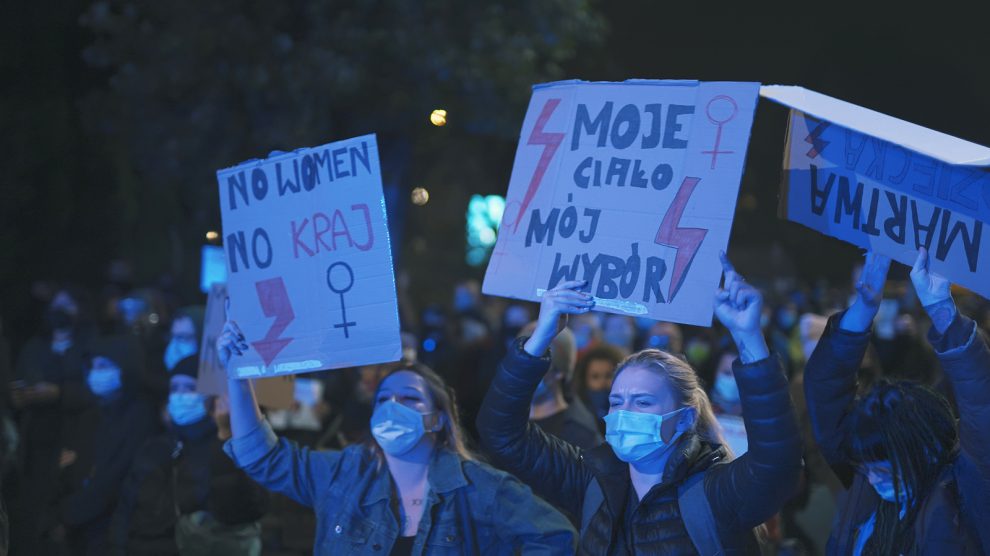 Human rights groups have condemned new laws in Poland which effectively outlaws all access to abortion, even in the case of severe and irreversible foetal defects or incurable illnesses that threaten the foetus’ life.

Approval of the law by the country’s constitutional court in October last year led to weeks of protests, which were the largest that Poland had seen in decades. Spooked by the scale of the demonstrations, the ruling Law and Justice party (PiS) delayed implementation until late on January 27.

Soon after the law came into effect, new demonstrations broke out across the country.

In the capital Warsaw, thousands of people gathered outside the constitutional court building, responding to calls for new protests by women’s groups who masterminded the weeks of demonstrations last year.

Adam Bodnar, Poland’s ombudsman for human rights, tweeted support for the protests, saying, “the state wants to further limit women’s rights, risk their lives, and condemn them to torture. This offensive is opposed by civil society. I appeal to the police to respect the citizens’ right to spontaneous, peaceful protest.”

Poland already has some of the strictest abortion laws in Europe, and most of the small number of legal abortions that take place in the country are cases of foetal defects.

Under the new rules, abortion will only be permitted in cases of rape, incest or when the mother’s life is in danger.

The Polish government has consistently backed the law, saying that it will halt what it calls “eugenic abortions,” referring to the termination of fetuses with Down’s Syndrome.

“The state can no longer take a life away only because someone is sick, disabled, in poor health,” PiS lawmaker Bartlomiej Wroblewski told reporters.

Ever since the law was given the green light by the constitutional court, the ruling party has been forced to deny opposition accusations that it overtly influenced its decision. The court is one of several judicial bodies that PiS has overhauled during reforms that the European Union has criticised.

Some room for compromise

However, the court’s ruling did leave open the possibility of parliament regulating some circumstances covered by the law.

Marek Suski, a PiS lawmaker, has already suggested that there may be room for some compromise.

“In cases when the fetus doesn’t have a skull or has no chance to live outside the womb, there should be a choice. We will work on this,” Suski told public radio.

Nevertheless, rights groups have reacted angrily to law’s implementation, both inside Poland and internationally.

“It is a dark day for women and girls in Poland. This harmful ruling roll back on pregnant people’s sexual and reproductive rights and puts their health at risk,” says Esther Major, senior research advisor at Amnesty International.

“This dangerous ruling is the latest in a coordinated and systematic wave of attacks on women’s human rights by Polish lawmakers. Legal prohibitions on abortion do not prevent abortion or reduce the rates of abortion. Instead, they serve only to damage women’s health by pushing abortions underground or forcing women to travel to foreign countries to access abortion care they need and to which they have a right.

“We stand in solidarity with women and girls in Poland and share in their outrage at this cruel decision.”