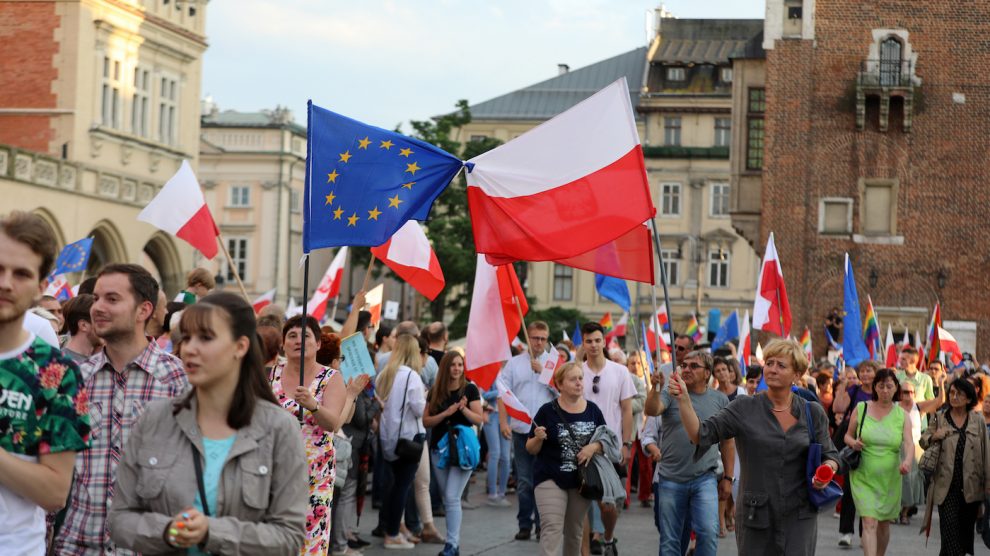 Polish authorities could soon face financial repercussions after concerns about the country’s judiciary were reinstated in the annual European Commission country reports on the Rule of Law released last Tuesday. But how likely is it that Poland will abide by the Commission’s ruling?

Following the latest report, the Commission has ruled that Poland has seven days to freeze its controversial Disciplinary Chamber or pay fines for failing to comply with EU law.

The Disciplinary Chamber, part of the Polish Supreme Court, was empowered in a December 2019 bill and has the jurisdiction to fine, decrease salaries, and remove judges from their position if they are accused of engaging in political activity or otherwise criticising the incumbent government.

Just a week before the report’s release, the Court of Justice of the European Union (CJEU) referred to the Disciplinary Chamber as “not compatible” with EU law and asked the local authorities to freeze its operation.

“I am waiting for information from the prime minister. The government is responsible for the relations with the EU, and the government was notified about the verdict. I will take action as soon as I have received official information,” Małgorzata Manowska, the first president of the Supreme Court, told Rzeczpospolita.

According to Agnieszka Kwiatkowska, a political researcher at the Warsaw-based SWPS University of Social Sciences and Humanities, the Polish government has two goals regarding the judiciary.

“Firstly, numerous government actions, including those directed against the opposition, against free media, are a breach of the Polish constitution, so taking control of the judiciary destroys the last line of defence against government actions,” she tells Emerging Europe.

“Secondly, it is an attempt to ensure the lack of criminal liability of the government, inter alia by taking over the Tribunal of State, the court which issues judgments in cases of the infringement of the Constitution or other crimes committed by state authorities,” Kwiatkowska adds.

The Court is expected to reach a conclusive decision at a final meeting that is set to take place on August 3 after it was unexpectedly postponed.

However, the Court may not have that long to reach a final verdict as, starting this Tuesday, the European Commission has given Warsaw just seven days to put the activities of the Disciplinary Chamber to a halt.

Once the deadline has passed, the Commission will likely ask the CJEU to impose a financial penalty on Poland effective immediately, which will include a fine that is to increase daily until the Disciplinary Chamber ceases operation.

Dr Katarzyna Zechenter, a lecturer at the UCL School of Slavonic and East European Studies, argues that the Commission’s latest ultimatum to Poland is not likely to bring about substantial change in the Law and Justice party’s approach to European affairs.

“If the penalty for not complying with European Commission ruling on Poland’s Disciplinary Chamber is only financial, Jarosław Kaczyński would perceive it only as something that can be later negotiated away. Moreover, he would get another chance of showing that he stood up to the EU and Germany with his uncompromising stand, presenting him with a means to hold on to power. Therefore, I do not believe that Kaczynski is likely to abide by the ruling of the European Commission,” Zechenter tells Emerging Europe.

Kwiatkowska similarly anticipates that Polish authorities will be able to find a way out of the situation through negotiations rather than genuine transformation of the judiciary, and even argues for a way around the potential sanctions.

“[The government] will try to work out a position that will formally satisfy the legal requirements of the CJEU but is not entirely in line with their essence. For example, it may suspend the Disciplinary Chamber while attempting to introduce executive supervision over judges through a new law or practice. Probably the execution of the judgment will take place at the last minute to delay the CJEU’s assessment of the execution of the judgment by the Polish authorities as long as possible and to give the impression of the Polish government as the ‘defenders of Polish sovereignty and independence,” she says.

Poland’s former independent ombudsman Adam Bodnar made international headlines last week after announcing that: “We are in the process of a legal Polexit which is taking place step by step,” in the aftermath of the July 14 Polish TK ruling.

Poles want to stay in the EU

However, according to Kwiatkowska, this remains an unlikely possibility considering the widespread attitudes in the Central European country.

“One problem for the government is the very high level of support for Poland’s membership in the European Union, even among its own voters, which include farmers who receive EU subsidies, amongst other beneficiaries. Hence, the Law and Justice Party will certainly not take any action leading to a Polexit or to limiting financial support for Poland, such as within Next Generation EU — the bloc’s recovery package supporting member states hit by the COVID-19 pandemic, as it would cost the party an immediate loss of support.”

However, the European Commission is quite clear on its expectations in the unusually stark 2021 European Commission County Report on Poland, in which it outlines the removal of the Disciplinary Chamber as a matter of utmost priority, stating that “the mere prospect of having to face proceedings before a body whose independence is not guaranteed creates a ‘chilling effect’ for judges and can affect their independence.”

“This seriously undermines judicial independence in Poland, effective judicial protection for citizens in Poland and the EU legal order as a whole,” the report further states.

While the Law and Justice party has on numerous occasions demonstrated its willingness to disregard the requests of the Commission, it is yet to be seen how willing it is to bend the rules when faced with not just the possibility of fines but also of a significant decrease in support.

Hungary could be next

Alongside Poland, Hungary is the country facing the sharpest criticism by the European Commission in regard to the quality of its judiciary. The 2021 Country Report on Hungary firmly condemns the current practice of appointing members of the Constitutional Court to the Supreme Court without adhering to established norms and in an environment of increasing favouritism.

Also, in Hungary, the report finds corruption to be particularly problematic, with policymakers being accused of failing to make sufficient progress.

Media freedom has further been outlined as a key aspect of pluralism that needs significant improvement.

Hungary and Poland remain the only member states under formal EU investigation for violating the rights of the LGBT community. At the same time, concerns over the rule of law could lead to freezing funds for the two states.

Budapest and Warsaw both applied for Next Generation EU Covid-19 recovery funds more than two months ago, but the Commission has yet to approve the request.

The Commission’s latest country reports were described as “maybe one of the most important sources for the possible application of the new conditionality,” by Didier Reynders European Commissioner for Justice, suggesting that the body’s proactive approach to members that flout the rules is here to stay.

“It really does strike me as a situation that is entering new territory in which the outcome is very hard to predict,” Stanley Bill, a Polish Studies professor at the University of Cambridge tells Emerging Europe.

“We’ll just have to wait and see how things unfold. In any case, I’ll be watching with interest.”