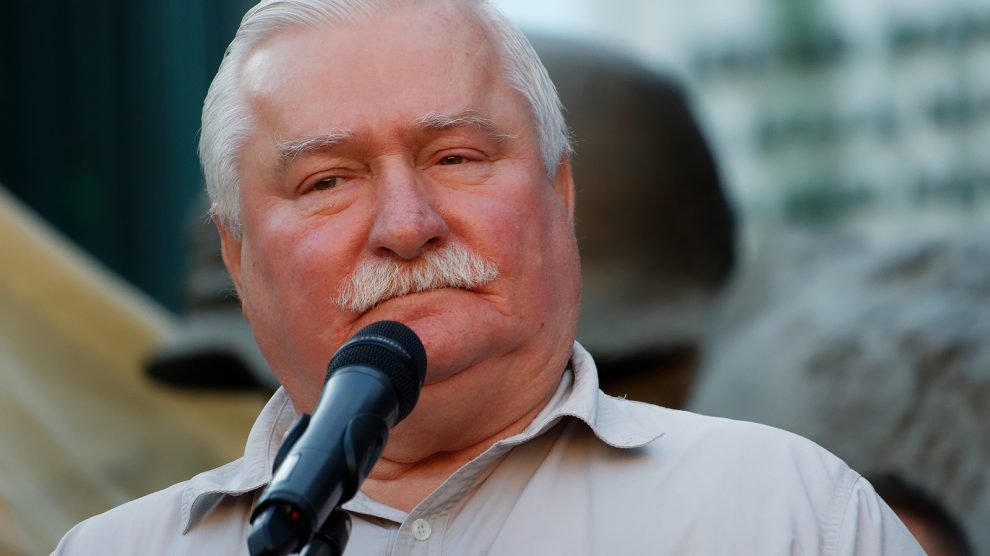 US President Joe Biden on June 14 made it clear that Ukraine still has some way to go before it can realistically hope for NATO membership. A former Polish president meanwhile is ready help, and laments the fact he couldn’t do more in the past.

Lech Wałęsa, the legendary leader of the Solidarity trade union in Poland in the 1980s and president of Poland in the 1990s, is disappointed with progress towards democracy in Ukraine. But, he says, he will offer his support and has high hopes for Poland’s neighbour.

“I was hoping that we would join the EU and NATO together, and I worked for a union of Ukraine and Poland. I was brought up with the notion that there is no free Poland without Ukraine. I worked for Ukraine,” Wałęsa says in an interview.

“But it failed. I lost the elections [he was president from 1990 to 1995] and Ukraine stayed where it is. This is first. Secondly, we must remember that back then there were different systems, there was no freedom and no democracy and it was slower work.”

“The Soviets did not bother us Poles so much, but in Ukraine it was still a little disturbing,” Wałęsa says. “But you can still have good systems, you can and choose good people, [it was] just that I could not do this, because there was no time, no preparation, no earlier free elections, there were no political parties,” he says.

“Ukraine is not ideally located geographically, between the West and the East, but today there is a new concept and geography is not so important, these were artificial borders.

“Ukraine is going too slowly, but it is being messed around by the Russians, communism lasted longer, it devastated Ukraine, so it will take some time to change. If only Europe were more united, this would speed things up in Ukraine, but Europe is now broken, Europe has a lot of problems,” he adds.

Asked about oligarch influence on the political system in Ukraine, Wałęsa says, “in every system someone is first and someone last, in every system there are poor and richer, only some systems are unfair. In a democracy the chance for justice is bigger, because you can organise yourself. Hence, for now, we are leaving the old system, where you can quickly become an oligarch, where you can cheat quickly, and by robbing you become rich.”

Ukraine’s president, Volodymyr Zelensky, last week submitted a bill to parliament designed to break the hold the oligarchs have on the country’s economy and politics. During his election campaign in 2019, one of Zelensky’s main promises was to end the the power of the oligarchs.

Oligarchs have dominated Ukraine since the mass privatisations of the 1990s, with many pointing to the presidency of Leonid Kuchma (1994-2005) as the era when it began.

It is widely believed that every political party in Ukraine – including Servant of the People, Zelensky’s party – is controlled by oligarchs.

The Maidan revolution of 2014 did little to change the dominance of oligarchs in Ukrainian politics. Former president Petro Poroshenko, who took over following that revolution, is himself a chocolate magnate, and in 2020 was charged with abuse of power. The case is ongoing.

According to a poll by Democratic Initiatives, in 2019, 92 per cent of Ukrainians identified the influence of oligarchs in the national economy as one of the three main factors hindering the country’s development.

“A nation does not just organise itself, it does not form parties,” Wałęsa goes on. “I do not belong to a party, and that is why others are created which become more organised and take advantage of the situation, they become oligarchs. The only way out is how best to organise the nation, keep it honest, not stealing, not deceiving yourself, there is no other way other than freedom in a democracy, no one will help you, help yourselves, and then others will also help you.”

Asked if events in Ukraine in 2004 and 2013-14 can be compared with Poland in the 1990s, Wałęsa says, “When I was in Ukraine there was a revolution, I immediately said that it was not that simple, you still have to organise, make political parties, political groups, to get there, create programmes to get people to rule. You will have to approach the same topics again and again. Getting better at it, but it will take a while.

“I am always available because my Nobel Prize tells me that you must always be ready to cooperate. I’m ready, but I do not volunteer, and there is little initiative from the other side.”

Zelensky had been hoping that NATO would this week decide to finally admit Ukraine, but was left disappointed.

US President Joe Biden said on June 14 that while it would become a member “one day”, it still had a long to go.

Wałęsa would no doubt agree. But if Zelensky has his number, he’s ready to help.

This article was co-written by Jo Harper.

Is Turkey responsible for the kidnapping of a Kyrgyz teacher?
Is it time for Central and Eastern Europe to embrace cryptocurrencies?
Comment