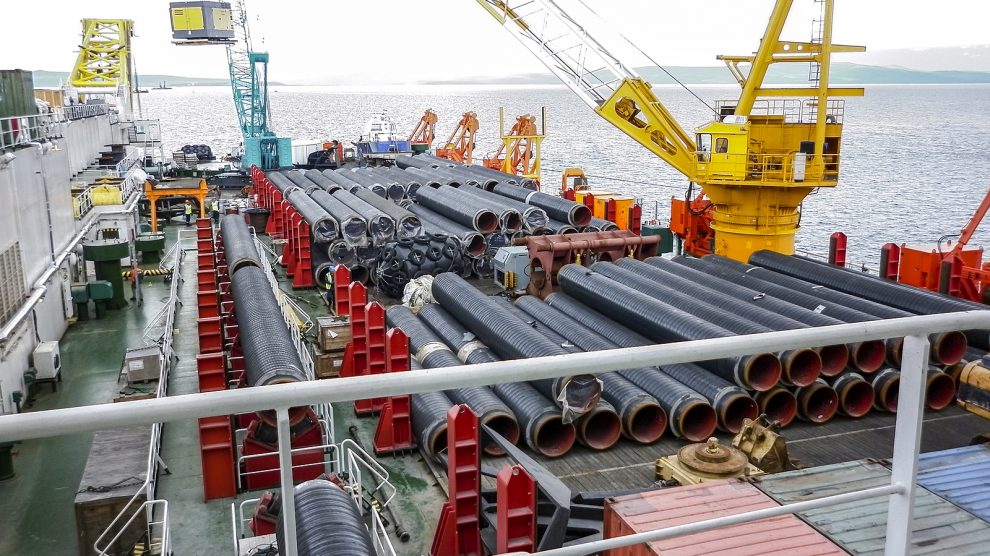 The United States has given Russia the green light to complete its controversial Nord Stream 2 gas pipeline. Ukraine, not for the first time, feels let down by its western allies.

US President Joe Biden’s administration last week announced that it would be waiving sanctions on the major company involved in the construction of the Nord Stream 2 pipeline, prompting disbelief and criticism in much of Central and Eastern Europe.

Sanctions would continue to be upheld against several smaller, mostly Russian entities that have been involved in the construction of the pipeline, including the Russian Marine Rescue Service. However, the decision to issue a waiver for Nord Stream 2 AG, a Switzerland-registered firm owned by Russian state gas giant Gazprom, essentially giving the green light the completion of the project.

The move was made in defiance of the US Congress, which in January decided that Nord Stream 2 AG and its CEO Matthias Warnig had engaged in sanctionable activity and proposed punitive measures.

However, in a letter to Congress, US Secretary of State Anthony Blinken said that the decision was made “in the national interests of the United States”.

Speaking subsequently at the Arctic Council in Iceland, which was attended by Russian Foreign Minister Sergei Lavrov, Blinken added that: “Today’s actions demonstrate the administration’s commitment to energy security in Europe, consistent with the president’s pledge to rebuild relationships with our allies and partners in Europe.”

The decision will certainly go a long way towards defusing tensions between the US and its major European allies which back the pipeline – notably Germany, which is dependent on Russia for its energy needs. Relations had also become increasingly strained during the presidency of Donald Trump, and the Biden administration has been selling the Nord Stream 2 move as a way of remedying some of the damage done.

However, the decision has been met with disbelief and fierce criticism from Ukraine, which fears that it will free up Russia to continue meddling in its internal affairs.

The 1,230-kilometre, 11.6 billion US dollars pipeline across the Baltic Sea is estimated to be just 100 kilometres short of completion and is expected to double Russian to Germany gas transit capacity to 110 billion cubic metres per year. It is projected to be completed by the end of this summer and has been touted as offering Europe a more stable source of gas.

Currently, and historically, the bulk of Russian gas exports to Europe pass through Ukraine, with Ukraine receiving billions of US dollars annually in transit fees. This makes both countries somewhat dependent on each other – Ukraine for hard currency in transit fees (and discounted rates for energy consumption) and Russia for the transit of its main export.

However, the completion of Nord Stream 2 would allow Russia to bypass Ukraine entirely, selling gas directly to the large European market. Not only would this deprive Ukraine of the substantial transit fees, it would also increase Europe’s dependence on Russia, and give the European states substantially less ground to stand on when opposing Russia, essentially giving Russia freer reign in its foreign policy.

A major component of that foreign policy has always been the fate of Ukraine, where the Kremlin continues to support two breakaway territories, and occupies the Crimean peninsula.

In a session held days after Biden’s announcement, the Ukrainian parliament overwhelmingly backed a resolution calling on US lawmakers to “use all available tools provided by US law to completely and irreversibly stop the construction of the Nord Stream 2 gas pipeline by applying blocking sanctions against all participants in this Russian geopolitical project”.

Ukrainian President Volodymyr Zelensky stated that the completion of the pipeline would be a “personal loss” for Joe Biden and would be a “serious political victory” for Russia.

Biden responded to the criticism by claiming that he had “been opposed to Nord Stream 2 from the beginning”. However, he added that “it was almost completed by the time I took office. And to go ahead and impose sanctions now would I think be counterproductive in terms of our European relations”.

This has cemented Ukraine’s fears that, despite its longstanding efforts to ingratiate itself to the western powers, it will never be able to override Russia’s relative economic and geopolitical pull. The decision to waive sanctions on the main constructors of Nord Stream 2 prove that as long as there are substantial economic interests at play between Russia and Europe, there will not be any concessions made for the sake of much countries such as Ukraine.

This would derail much of the work Ukraine has done, particularly since the Maidan Revolution of 2014. With the country a vital component of Russia’s strategic interests, it has to come accept that so long as Ukraine shares a border with Russia, Russia will never disappear as a player in the country’s politics.

This, along with the fact that economic interests will always take precedence over the lofty ideals espoused by European (and North American) governments, would suggest that it is unwise for Ukraine to take any course that would predictably anger Russia – such as integration of with the EU and NATO.

The latter in particular is a major sticking point in Ukraine’s relations with its large neighbour – as long as the perception remains within Moscow, whether fairly or unfairly, that NATO’s eastward charge over the last three decades is an inherently aggressive undertaking, Ukraine will never be able to fully integrate itself within such structures.

This latest episode could serve as a wake up call for Ukraine not to put all its faith in its western allies.