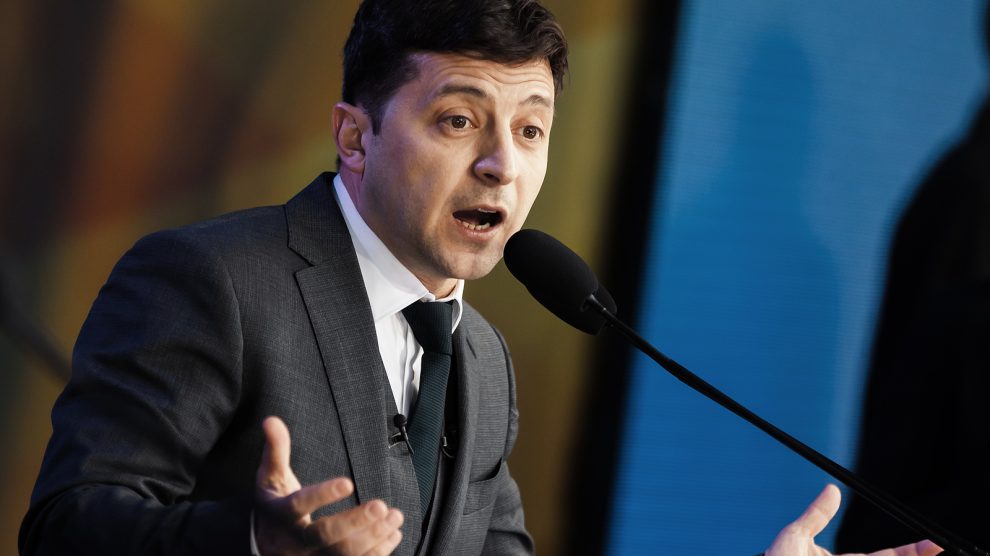 Can a proposed new bill really break the stranglehold of Ukraine’s oligarchs?

Ukraine’s president, Volodymr Zelensky, has finally submitted a long-awaited bill that he hopes will once and for all breach the stranglehold that the country’s oligarchs have on its economy and politics.

The bill, however, has already provoked fierce fierce criticism – both from the country’s opposition and from those worried that the draft bill is too little, too late.

During his election campaign in 2019, one of Zelensky’s main promises was to end the stranglehold oligarchs have over Ukrainian politics. According to a poll conducted by Ukrainian think tank Democratic Initiatives, it was the second most commonly cited reason that people voted for Zelensky.

Now, nearly two years after taking office, the president, a former comedian, has spent most of 2021 publicly and legally attacking oligarchs – and last week’s draft bill is the latest salvo.

The bill seeks to introduce and define the term “oligarch” in Ukrainian legislation. According to the draft, an oligarch is a person who meets three of the following criteria: involvement in political activities, having significant influence on mass media, being the owner of a monopoly and having confirmed assets worth 2.27 billion Ukrainian hryvnia (roughly 83 million US dollars).

If the bill were to be passed, the National Security and Defence Council of Ukraine would create a public registrar of people designated as oligarchs. These would be barred from paying contributions (whether directly or through intermediaries) to political parties or individual politicians and from participating in the privatisation of state assets.

Furthermore, all top members of the government, including members of parliament, would have to publicly disclose any meeting they have with figures defined as oligarchs. For certain officials – such as the heads of the national bank, election commission and security services – failure to do so would result in their dismissal.

Oligarchs have dominated Ukraine since the mass privatisations of the 1990s, with many pointing to the presidency of Leonid Kuchma (1994-2005) as the era when the rot set in. Often, well-connected individuals bought state assets for low prices, in the process creating a new ruling class of oligarchs. Today, it is commonly believed that every political party in Ukraine – including Servant of the People, Zelensky’s party – is bankrolled and controlled by such oligarchs.

This system has often led to infighting between these elites, which is usually cloaked in the language of politics.

Viktor Yanukovych, president from 2010-14, appeared to be trying to “centralise” the oligarchs and bring them to heel, likely emulating the tactics of Vladimir Putin in Russia. This prompted many, like Ihor Kolomoisky and Serhiy Taruta to directly or indirectly support the Maidan protests of 2014 which led to the fall of Yanukovych.

The Maidan revolution however did little to change the dominance of oligarchs in Ukrainian politics. Former president Petro Poroshenko, who took over from Yanukovych, is himself is a chocolate magnate, and in 2020 was charged with abuse of power. The case is ongoing.

According to a poll by Democratic Initiatives, in 2019, 92 per cent of Ukrainians identified the influence of oligarchs in the national economy as one of the three main factors hindering the country’s development.

For these reasons, the draft bill submitted by Zelensky – on the surface at least – is a positive step forward. However, many believe that full “de-oligarchisation” is no simple undertaking, while others are sceptical of the president’s intentions.

Kira Rudyk, head of opposition party Voice, called the bill a “populist PR stunt”. Others have contended that without strengthening institutions such as the judiciary, such a law will be meaningless in practice.

Who guards the oligarchs?

There has also been criticism from within Zelensky’s party. The speaker of the parliament, Dmitro Razumvkov, has expressed his concerns that the committee charged with identifying oligarchs could hand too much power to the president, and essentially give him the power to declare who is (and isn’t) an oligarch, opening up the possibility of abuse of power.

However, Zelensky hit back at his critics in a televised address last Friday, two days after the draft bill was submitted. In the address, he went so far as to threaten to call a national referendum on the bill, should parliament strike it down.

Throughout 2021, Ukraine’s Security Council has been noticeably more active in cracking down on financial and political crimes. In addition to Poroshenko facing an abuse of power case, several associates of Ihor Kolomoisky have been charged with embezzlement.

The most high profile sanctions on a public figure came when the Security Council charged Viktor Medvedchuk – a billionaire opposition MP allegedly with close ties to Putin – with high treason and took several of his media channels off the air.

The fact that these steps have already been taken play in Zelensky’s favour – he has already demonstrated that he has taken action towards fulfilling one of his main promises. If the de-oligarchisation bill were to go to referendum, the public would likely vote in favour of it – offering Zelensky and his party a major victory.

However, the extent to which the bill change Ukrainian politics is unclear. If, as has happened before, this is simply another round of infighting between oligarchs, progress will likely be superficial at best.