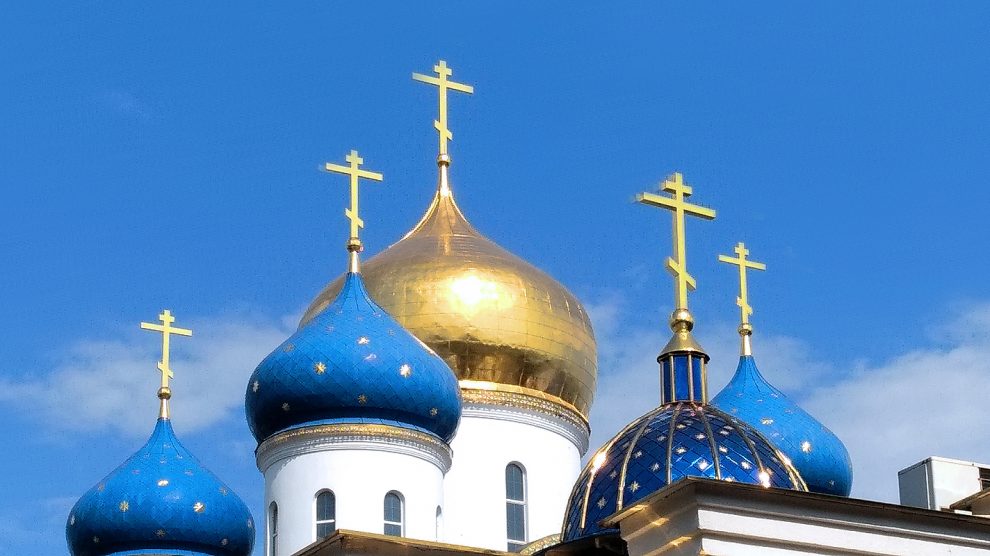 Ukraine’s Orthodox Church split from its Russian counterpart in 2018. We explain why.

In October 2018, the Ukrainian Orthodox Church officially split from its Russian counterpart, after more than 300 years.

The decision, which was approved by the Patriarchate of Constantinople, the symbolic “first among equals” of the world’s Orthodox churches, triggered a major fallout within the Orthodox world, possibly the most serious in 1,000 years.

The same month the declaration was made, the Russian Orthodox Church announced that it would break off relations with the Patriarchate.

The process was ratified in a ceremony in Istanbul on Orthodox Christmas Eve, 2019, when the Metropolitan of Kyiv, the young Epiphanus I received Tomos from the Constantinople Patriarchate. The document granted autocephaly to the newly-formed and newly-recognised Orthodox Church of Ukraine.

For Ukraine, this was a major moment, as it represented another step in breaking away from political, economic and religious subservience to Russia.

In Russia meanwhile, alarm bells were going off. Ukraine has the world’s third largest Orthodox Christian population, after only Russia and Ethiopia, and roughly 12,000 of the Russian Orthodox Church’s 36,000 parishes were in Ukraine.

As a result of the split, the Russian Orthodox Church stands to lose much of its territory, believers and, crucially, its spiritual and symbolic authority over Ukraine. Both Russian President Vladimir Putin and Patriarch Kirill made strong statements condemning the schism.

So how did it come about?

Shortly after independence in 1991, Ukraine was in the unusual position of having three active Orthodox churches on its territory. The first was the Ukrainian Orthodox Church of the Moscow Patriarchate (UOC MP) – to this day the largest within Ukraine. It retained a considerable degree of autonomy from the Moscow Patriarchate, with independent finances and relations with authorities in the two countries. Despite this, due to the historical links between the church and state in Russia, links that appear to have been growing stronger since Vladimar Putin’s second stint as president, the UOC MP was derided by Ukrainian nationalists as a Russian fifth column.

The second was the Ukrainian Orthodox Church of the Kyiv Patriarchate (UOC KP). Founded in 1992, it was declared as “schismatic” by the UOC MP and, until the granting of Tomos, was not recognised by other Orthodox churches. When Tomos was granted, the UOC KP was followed by about a third of the parishes of the UOC MP, mainly concentrated in western Ukraine.

Then there was the Ukrainian Autocephalous Orthodox Church (UAOC), founded in 1917 by Ukrainians in exile. The church returned to Ukrainian territory following independence, and is unsurprisingly the smallest of the three, with parishes again mainly located in western Ukraine.

The granting of Tomos in 2018 merged the UAOC, the UOC KP and some parishes of the UOC MP into a newly-unified autocephalous Orthodox Church of Ukraine (OCU). However, the Russian Orthodox Church, along with the Russian government, has been actively subverting the newly-established church. To this day, other than the Constantinople Patriarchate which bestowed Tomos in the first place, only the Patriarchate of Alexandria and the Orthodox churches of Greece and Cyprus have recognised the UOC’s dominion over Ukraine’s parishes.

For many, the establishment of the OCU was inevitable. Throughout the Orthodox world, “one country, one church” is an accepted premise and virtually every Orthodox majority country in the world (and indeed most countries with any Orthodox Christian minority) have their own autocephalous church.

Father Andriy, a priest at a parish of the UOC MP, agrees with this view.

“International law grants nations the right to self-determination, the right [for peoples] to build their own national institutions. Gradually, not only states, but also local Orthodox churches began to organise along ethnic lines. The growth of self-awareness of the Ukrainian people, the restoration of Ukrainian statehood at the end of the 20th century – all of this made the emergence of the national Ukrainian church inevitable.”

In the two years since Tomos was granted, 700 parishes have left the UOC MP to join the OCU. Many parliamentarians, especially during the rule of former President Petro Poroshenko have repeatedly stressed that the UOC MP is “governed by an aggressor country”. Despite this, the UOC MP remains the largest religious institution in Ukraine. Parishioners appear ambivalent about the intrigues among the highest-level clerics.

“I attend church every Sunday and that’s a place where I want to be preached to about divine matters helpful for me to lead a fulfilling and meaningful life,” says Yulia, a parishioner of a UOC MP church. “As long as that particular goal is realised, I don’t care that much about the patriarchate…politics is omnipresent but at parish level it’s rather innocent and represents itself mainly in the form of opinions and views which people happen to exchange.”

Despite this, there remains the fact that, at least at the highest echelons of power, the Russian Orthodox Church is inherently intertwined with the Russian state, and thus, in theory at least, representative of the Russian state’s interests.

However, like any other institution, the Church has its own agenda, interests and sensitivities that don’t always necessarily align with those of the state. An example of this is when Abkhazia and South Ossetia seceded from Georgia with Russian support: the Russian Orthodox Church maintained, apparently in defiance of the Kremlin, that the territories’ parishes should remain under the Georgian Orthodox Church.

However, since the war in Ukraine began in 2014, the Russian Orthodox Church, after initially making superficial statements expressing neutrality, fell in line with the official Russian narrative.

Although Patriarch Kirill did not attend the signing ceremony of the treaty which ratified Russia’s occupation of Crimea, he publicly supported separatists in Donbas. During the Battle of Ilovaisk, the bloodiest engagement of the war, he admonished Ukrainian “Uniates and schismatics” for fighting against “their fellow Orthodox brethren” in the ranks of the separatists and their supporting forces.

This means that Patriarch Kirill, and by extension, the Russian Orthodox Church, can (and have been) used as soft power to sell Russia’s state narratives and influence people to support Russian state actions. Although, as in the case of Georgia, the Church’s agenda doesn’t always align with the state’s, that they align in the war in Donbas is enough to condemn the Russian Orthodox Church and the UOC MP in the eyes of many Ukrainians.

Yulia agrees that politics does not affect her own faith. “What I can firmly state though is that those ties between state and church do not evidently affect my life in church or on the local level. I go there for its divine nature and my individual unity with God, and I get what I’m looking for.”

Despite this, Father Andriy is under no illusions as to the implications of the Russian state’s interference with its Church. “One has to agree that those members of the hierarchy who arrogate to themselves the right to speak on behalf of the Church pursue political interests, these compromise the Church.”

Political and theological disagreements have historically hampered the unity of the Orthodox Church. Now in Ukraine, we can see a split, that if inevitable, was certainly accelerated by political developments, not least Russia’s aggression against Ukraine. Although this plays out mainly in the form of intrigues among clergy, the future of Orthodoxy in Ukraine remains unclear.

A major positive is that the parishioners themselves appear to be above the politicking.