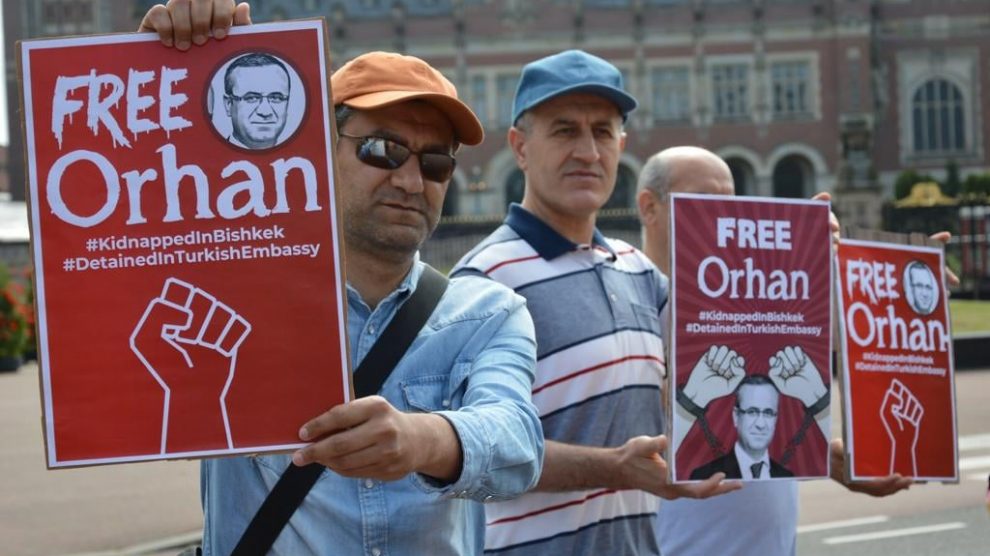 The founder of a network of education institutions in Kyrgyzstan disappeared in Bishkek last month. Was Turkey responsible?

On the evening of May 31, 53-year-old Orhan Inandi, founder and chairman of the board of Sapat Educational Institutions, a large network of prestigious schools and an international university in Kyrgyzstan, was declared missing after failing to return to his home in the Kyrgyz capital Bishkek.

The following day, investigators found his car, unlocked, with four flat tires and all valuables inside, intact.

Local authorities announced that they were investigating a potential kidnapping. However, on June 6, in a video posted on Twitter, Inandi’s wife Reyhan claimed that an unnamed source had told her that her husband, who holds dual Turkish-Kyrgyz citizenship, was being held against his will at the Turkish embassy in Bishkek.

She went on to state that her husband was being forced to sign documentation revoking his Kyrgyz citizenship in order to simplify his extradition process.

Turkey Tribunal, a human rights group, also says that it has information Inandi is being held at the embassy, and has called on NATO to put pressure on Turkey to release him.

The Turkish embassy in Bishkek has denied the claims.

In 2019, the Turkish government accused Inandi, who has worked in Kyrgyzstan since 1995 and has been a citizen of the country since 2012, of links with the movement connected with US-based Sunni cleric Fethullah Gülen.

A former ally of Turkey’s ruling AKP party, Gülen has become one of the main adversaries of Turkish President Recep Tayyip Erdogan since a corruption scandal rocked the party in late 2013, which Erdogan claimed was a “dirty judicial plot” by police officers and investigators loyal to Gülen.

The scandal lead to a crackdown on the Gülen movement and its followers. It has since been depicted as a radical Islamist organisation by AKP-linked media and in May 2016 was officialy designated a terrorist group by the Turkish government. That summer, a failed coup d’etat against Erdogan was blamed on the movement, precipitating another crackdown on the group’s members – both within Turkey and abroad.

Since then, Turkish nationals affiliated with the Gülen movement have been arrested and extradited from places as far away as Kenya, Cambodia and Gabon.

Once back in Turkey, they face prosecution on trumped up terrorism charges.

On June 7, one day after Reyhan Inandi uploaded her video about her husband’s whereabouts, Kyrgyz Deputy Minister of Foreign Affairs Aibek Artykbaev confirmed that the Turkish government had requested Orhan Inandi’s extradition in 2019, a request which the Kyrgyz government rejected, citing Inandi’s Kyrgyz citizenship.

Some reports claim that in wake of the extradition request, the Kyrgyz government offered Inandi a state-assigned security detail, which the teacher turned down.

These details have exacerbated fears that Inandi may indeed be in the custody of Turkish authorities and facing extradition, arbitrary detention and an unfair trial.

Some have likened the situation to the disappearance of Saudi dissident journalist Jamal Khashoggi, who was murdered in the Saudi Arabian consulate in – ironically – Istanbul. Small-scale protests have been held in the Bishkek, with people demanding that the Kyrgyz government properly investigate Onandi’s disappearance.

“Orhan Inandi is a Kyrgyz citizen,” says Syinat Sultanalieva, a researcher at Human Rights Watch. “Kyrgyzstan aspires to hold international human rights standards, and this is a clear instance in which it is essential. If the Kyrgyz authorities do not retrieve Inandi from wherever he is being held against his will, they will fail to meet their obligations as required under international law and the Kyrgyz Constitution.”

Likely coincidentally, on June 9 Kyrgyz President Sadyr Japarov made his first official visit to Turkey, where he met with Erdogan. When asked if Japarov had broached the subject of the teacher’s disappearance with his Turkish counterpart, Japarov’s spokesperson stated that “President Japarov asked his colleague Recep Tayyip Erdogan about Orhan Inandi, who went missing in Kyrgyzstan. Recep Tayyip Erdogan replied that he did not know him, he had no information and that he didn’t want to hear anything about FETO supporters.”

FETO – Fethullahist Terror Organisation – is the Turkish government’s designation for the Gülen movement.

How the situation unfolds will demonstrate much about Kyrgyzstan’s new president’s relations with Turkey.

Since taking office last year, Japarov has identified Turkey as a key partner for Kyrgyzstan in both economic and security matters, underlined by his trip to Turkey last week.

If Inandi’s disappearance is indeed the work of the Turkish secret services – and the evidence appears to be in favour of such a conclusion – the operation would likely have been carried out with at least the consent of Kyrgyz authorities.

If this were to be the case, then Japarov would be implicated in a major human rights scandal – perhaps validating fears that his presidency will see a return of authoritarian, strong man politics.

Imitating Russia, Hungary bans ‘gay’ content – and that includes rainbow flags
‘I could have done more’: Wałęsa on Ukraine
Comment