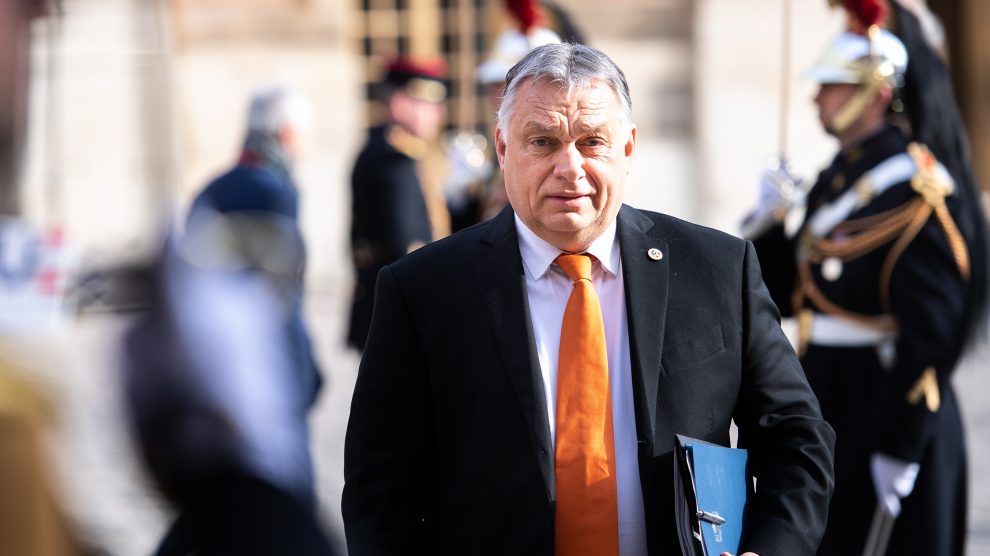 For Hungary’s much-hyped united opposition, hope of toppling Viktor Orbán in a parliamentary election on April 3 is beginning to fade.

Recent polls have shown Orbán’s party Fidesz widening its lead over the six-party opposition, while Orbán himself is similarly pulling away from rival Péter Márki-Zay as the public’s preferred option for prime minister.

Less than six months ago, it all looked very different.

In October 2021, when Márki-Zay, the mayor of Hódmezővásárhely, a small town in southern Hungary, won a primary election to choose the opposition’s joint prime ministerial candidate, he vowed to unite Hungarians, calling his win “a revolution of ordinary people”, and encouraged supporters of all opposition parties to get behind him.

It’s not quite worked out as planned.

Hungary’s opposition united in 2020 after reaching the conclusion that only collective candidates could defeat Orbán and Fidesz, hitherto favoured by Hungary’s voting system in which the majority of seats in parliament are elected in single-member, first-past-the-post voting districts.

Márki-Zay first came to public prominence in 2018 when winning the mayoral race in Hódmezővásárhely – previously a Fidesz stronghold. He did so with the backing of the centre-left Socialists and the formerly far-right Jobbik: both parties remain anchors of Hungary’s united opposition, alongside the progressive Momentum party.

But at nationwide level he has not managed to grab the public’s eye, adds Istrate, who puts this failure down to three reasons: “internal power struggles between the six-party alliance, a massive Fidesz campaign aimed at discrediting him, and an overdose of campaign promises instead of simple messages.”

‘Europe or the East’

Both Orbán and Márki-Zay held rallies on March 15, Hungary’s independence day, with Orbán, who has toed the line on EU sanctions against Russia, nevertheless doubling down on his decision not to send any weapons to help Ukraine fight against Moscow’s invasion of the country.

A significant share of the Fidesz voter base is pro-Kremlin, which is one of the reasons why the ruling party campaign has avoided calling out the aggressor and why Orbán declared de facto neutrality.

“We must stay out of this war. We will not send any troops or weapons to the battlegrounds,” said Orbán, who claimed that the opposition would drag Hungary into a “ruthless, protracted and bloody conflict”.

“Orbán can’t risk alienating his pro-Russian voters, otherwise some of them could choose to vote for the far-right/pro-Kremlin Our Homeland party that is on the verge of getting into parliament,” Istrate tells Emerging Europe.

Márki-Zay meanwhile, while not specifically saying that he would reverse Orbán’s policy of broad neutrality, hinted that there could be a change of course should he be elected on April 3.

“We only have one choice: we must choose Europe instead of the East, and freedom instead of authoritarianism,” he said.

Orbán has faced a great deal of criticism for his relationship with Vladimir Putin, which Action for Democracy, a Washington-based organisation working to mobilise the Hungarian diaspora, says continues to be “close”, if “less overt” than before Russia’s invasion of Ukraine. Orbán visited Putin in Moscow just weeks before the invasion of Ukraine.

“In Hungary, his state media is amplifying Kremlin talking points…his allegiance is still to Vladimir Putin. Orbán is playing a cynical political game and is no friend to democracy, the EU or the rule of law,” said the organisation’s advisory council chair Kati Marton in an emailed statement.

According to Freedom House, a human rights watchdog which ranks Hungary as only “partly free”, since taking office for the second time in 2010 (he was also prime minister from 1998-2002) Orbán, now 58, has pushed through constitutional and legal changes that have allowed him to consolidate control over the country’s independent institutions.

More recently, the Fidesz-led government has moved to institute policies that hamper the operations of opposition groups, journalists, universities, and nongovernmental organisations who criticise it or whose perspectives it otherwise finds unfavourable.

Its many scrapes with the EU over issues such as the rights of migrants and the LGBT+ community are the stuff of legend, a legend that Orbán has carefully crafted to portray himself as a defender of “traditional values” against the creeping liberalism of Brussels.

That the EU has repeatedly accused Hungary of flouting its core values has been worn as a badge of honour, despite numerous defeats at the EU’s highest court, the European Court of Justice (ECJ).

In February, the ECJ rejected a Hungarian (and Polish) appeal against a mechanism that ties EU funding to respect for democratic values and the rule of law. “Compliance with those values cannot be reduced to an obligation which a candidate state must meet in order to accede to the European Union and which it may disregard after accession,” said the court.

It has only served to add to the Orbán legend, strengthening the “us against everyone” narrative that is rammed home day and night by the government’s powerful and highly effective propaganda machine.

Voters, if the polls are to be believed (and for some years they have not been altogether reliable), have swallowed the propaganda whole, while the opposition – united in little more than name – has failed to offer a coherent alternative.

A strong economy – at least on the surface – has also been helpful for the incumbent. GDP grew 7.1 per cent in 2021, above expectations.

However, according to Sandor Richter, an economist specialising in Hungary at the Vienna Institute for International Economic Studies (wiiw), the success of the economy is not as impressive as it at first appears.

“If we look at the 12 years Orbán has been in office, Hungary has performed no better, no worse, than any of its peers,” Richter tells Emerging Europe, also suggesting that there will be problems ahead.

“Generous benefits – often handed out at election time – create budget deficit issues which until now have at least in part been offset by transfers from the EU. But if the EU does indeed now get tough on Hungary, that could change.”

Nevertheless, while Istrate says that an opposition victory “can’t yet be entirely ruled out”, the potent mix of perceived economic growth and propaganda means that a new chapter in the legend of Viktor Orbán appears as though it is about to be written.

Photo: Viktor Orbán arriving at a meeting of the EU Council on March 11. © European Union.