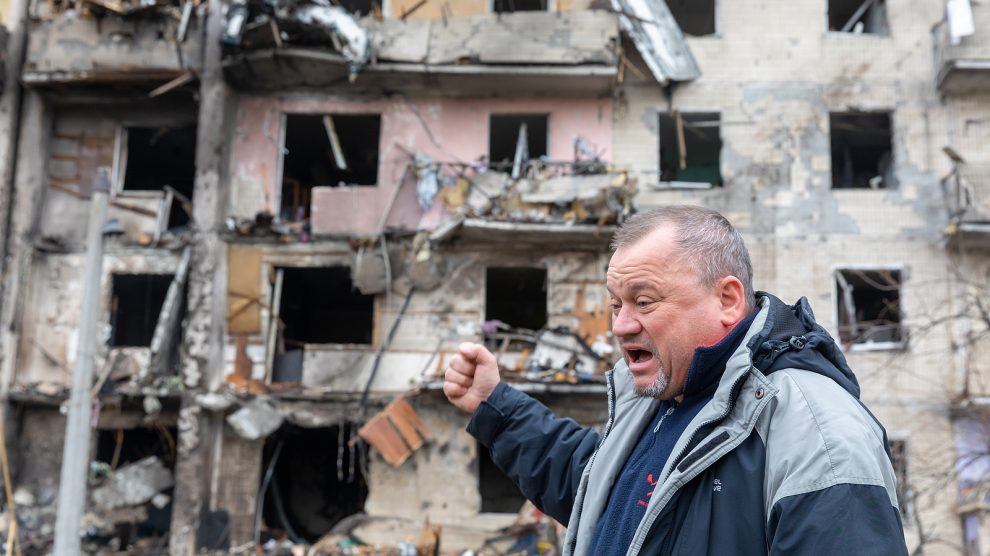 Despots around the world are watching as Putin flouts every international norm and tramples over the democratic self-determination of a peaceful neighbour.

There is a strong case to be made for US military intervention in Ukraine, despite the broad consensus that any such direct involvement is unnecessary, or the worry that it could risk escalating into a nuclear confrontation between the US and Russia, however unlikely that may be.

While America and the international community is successfully isolating Russia, freezing its assets, banning the country from prestigious sporting events, and more – the fact remains that unless we intervene militarily, Ukraine will inevitably fall to this belligerent despot.

We are watching the gravest humanitarian crisis of our times unfold before our eyes. UNICEF has pointed out, for example, that all of Ukraine’s 7.5 million children are at risk – many have already been killed by the Russian military machine. In the final analysis, America cannot presume to stand for democracy while ultimately standing back and watching as Ukraine is gradually conquered, despite the most valiant efforts of its people.

It is of course true that Ukraine is, geographically speaking, a long way off from the US, nor does the US have a military base within that beleaguered country – and as BBC News adds, “Ukraine does not have strategic oil reserves, and it’s not a major trade partner”.

Sanctions alone will not bring Putin to abandon his war

These considerations, however, true as they may be, are hardly relevant when it comes to intervention, which is of such momentous importance. There is no doubt of course that the military hardware provided by the US and Europe has helped the Ukrainians to significantly hamper the Russian invasion of their country – however, it is just as clear that no amount of such aid will halt the Russian onslaught; and regardless of how economically debilitating they may turn out to be, sanctions will not bring Vladimir Putin to abandon this illegal, immoral and unprovoked war of conquest against a peaceful, sovereign and democratic nation.

The courageous men and women of Ukraine have decided that they will not surrender tamely to the enemy, that they will “not go gentle into that good night”, but rather have determined that they will never acquiesce to tyranny, or to the vain longings of a Russian despot eager to restore the power and prestige of a bygone era.

The people of Ukraine have decided that they will fight to the last, to never surrender, so that if their country is to end, “let it end”, as Churchill would say, “when each one of us lies choking in his own blood upon the ground”.

Putin has issued his threats of nuclear engagement to frighten and cow the West into not directly interfering militarily – but there is every reason to see this as a bluff, as Putin knows full well that if he used his used nuclear arsenal, it would spell the obliteration of Russia and the decimation of countless millions of innocents.

We should not be so scared of Putin that we allow the people of Ukraine to fight this Goliath all alone. We are facing a moment such as we have not seen since 1939, and not since Hitler’s invasion of Europe have we been as justified as now in bringing our military to bear in defence of freedom, justice, international law, and the safeguarding of innocent men, women and children who want only to live unmolested and in peace.

Boots on the ground

Of course, any military intervention on our part must be introduced before it is too late, yet also with the utmost care. This means, first, that Biden must significantly increase the number of boots on the ground – especially in Poland and Romania – so that Putin knows that we are in deadly earnest. Before we allow our troops to engage the enemy, we should give Putin a chance to cease his aggression and agree to serious talks.

Such a diplomatic overture could be conveyed to Putin by French President Emmanuel Macron, who has been tirelessly working for an end to this conflict. Macron also knows better than anyone that short of an unlikely breakthrough “the worst is yet to come” and that Putin will not stop until all of Ukraine falls into his hands.

There is a widespread belief that once Putin has taken Ukraine, he will cease his war mongering and never dare to attack another European country. Yet those who make such suggestions also never dreamt that Putin would invade Ukraine in the first place and seek to conquer an independent and sovereign country which did nothing to provoke such naked aggression and barbarous cruelty.

Despots around the world are watching as Putin flouts every international norm and tramples over the democratic self-determination of a peaceful neighbour. Around the world, democracy is retreating, and authoritarianism is gaining ground – and that goes for us as well, right here at home. It is time that Americans stand up and stand shoulder-to-shoulder with the brave people of Ukraine who have demonstrated their resolve, their unwillingness to surrender, and their fortitude in the face of impossible odds.

We cannot afford to watch this country fall and we must act now – for the future of Europe and indeed the world may very well hang in the balance.

Sam Ben-Meir is a professor of philosophy and world religions at Mercy College in New York City.

In Kazakhstan, the president failed in his supreme duty of upholding the constitution
We must stand up to Putin now, before it is too late
Comment