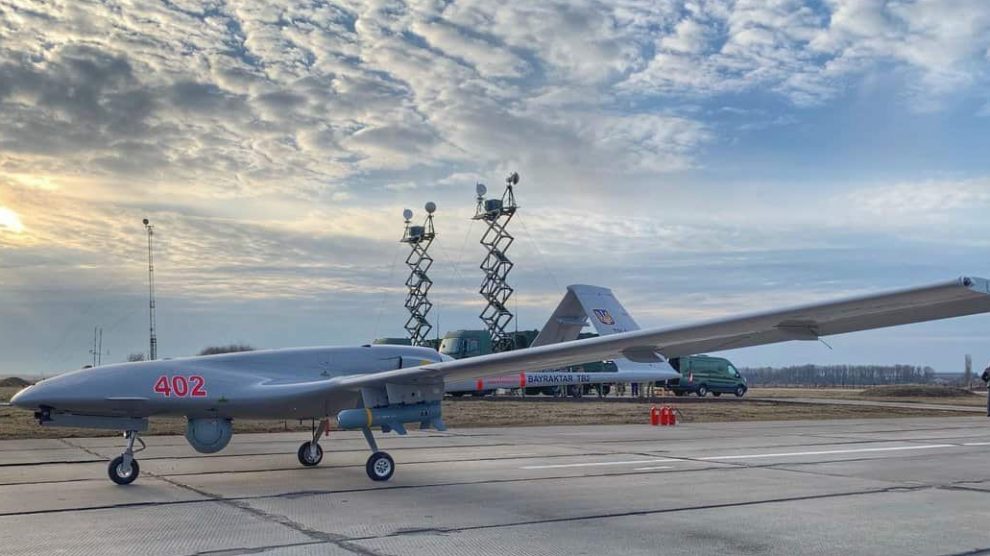 Ukraine is confident that Turkey’s Bayraktar TB2 will beef up its military capabilities and deter any further Russian aggression. But are its hopes misplaced?

It was the beginning of a flourishing military partnership between the two countries, which was ramped up last month when Ukrainian President Volodymyr Zelensky signed a memorandum of cooperation with Baykar Savunma, the company which makes the Bayraktar TB2, to establish joint training and maintenance centres in Ukraine.

At the same time, Ukraine also announced that it would be acquiring a further 24 Bayraktar TB2s and that it wants to set up factories that would produce the Turkish-designed unmanned aerial vehicles (UAVs).

Despite Ankara and Moscow regularly finding themselves supporting opposing sides – whether in Nagorno-Karabakh, Syria, or Libya – Turkey is arguably the NATO member which enjoys the closest relationship with Russia.

In late 2017, Turkey bought the S400, Russia’s most advanced air defence system available for export, much to the chagrin of the United States.

“Providing Ukraine with advanced military equipment provides rare leverage for Ankara in its complicated and strained relationship with Moscow,” says Sitki Egeli, a defence analyst at Izmir University of Economics.

By next year, Ukraine could have as many as 36 Bayraktar TB2s, making the system a major part of the country’s defence arsenal.

However, just how much of a game changer the Turkish UAVs would be in any potential conflict with Russia is yet to be seen.

The Bayraktar TB2 has earned a reputation as being a cheap yet effective drone over the last few years, largely fuelled by a successful Turkish propaganda campaign based on videos of the system in action.

While it may benefit from the fact that only a few countries – the United States, Israel, Turkey, Iran and China – even have combat-tested mass-produced UAVs, its performance in recent conflicts has nevertheless been impressive, particularly against Russian-made air defence systems.

During the latest round of fighting in Nagorno-Karabakh last year, the TB2 was widely viewed as one of the major factors behind Azerbaijan’s victory. The Armenian forces, with antiquated Soviet-era air defence systems, could not cope with the modern UAVs fielded by Azerbaijan.

The conflicts in Libya and Syria have also demonstrated the TB2 in action, often directly against newer Russian-made air defence systems. During a brief conflict between Turkey and Syria in early 2020, spurred by Syrian air and artillery strikes on Turkish “observation posts” inside Islamist rebel-controlled territory in Idlib province, Turkish drones destroyed hundreds of Syrian armoured vehicles and air defence systems.

The latter included Russian-made Pantsir S1s, considered to be one of the most sophisticated Russian air defense systems.

In Libya, Turkey – in support of the UN-recognised Government of National Accord (GNA) – deployed the TB2 against the Libyan National Army of Khalifa Haftar. In this campaign, Turkish drones managed to destroy dozens of Pantsir-S1s, supplied by the UAE.

However, even in these conflicts, the TB2 suffered a relatively high rate of attrition. In the first six months of 2020, at least 16 TB2s were lost in Libya, almost all of them (at least claimed) to have been shot down. In Syria, government forces also managed to shoot down several TB2s.

But the successes of the TB2 are not necessarily indicative of the system’s effectiveness against sophisticated adversaries, according to Dmitry Smirnov, a former Ukrainian air force officer now working as an instructor in an Ethiopian air force academy.

“[The TB2’s] successes against Pantsirs in Libya and Syria do not mean much,” he tells Emerging Europe. “These are supposed to be part of a layered air defence network, consisting of everything from high-calibre machine guns to long-range surface to air missiles. The Syrians and Libyans, due to financial and practical constraints, cannot afford such a network, as the Russians could. This is also without considering the quality of standards and training among the crews of the air defence systems.”

According to Smirnov, UAVs are always vulnerable against peer or near-peer adversaries due to their relatively low speeds, and low altitudes.

This may be why Russia does not appear to be alarmed by Ukraine’s procurement of the systems. Aaron Stein, a contributor to War on the Rocks, supports this view.

“Because these drones have proved susceptible to ground fire…there is little concern among Russian security elites about the proliferation of Turkish drones in Eastern Europe…in a near-peer conflict, drones like the TB2 are not survivable,” he says.

As such, Ukraine may have to be wary of putting all of its hopes into the TB2 to provide an effective deterrent to Russian aggression.

Separatists in the east of the country are in possession of a fairly advanced array of air defence weapons, some captured from the Ukrainian military and some provided by Russia.

Then there is the matter of the actual Russian military’s air defence.

The Ukrainian air force was grounded for most of the war in 2014 and 2015 due to the deterrent posed by the separatists and their Russian backers. This situation is unlikely to change should fighting restart. However, the TB2, being inexpensive (particularly compared to a modern jet fighter), means that its operators, should they have the financial capacity, can sustain high levels of attrition for the system.

This, perhaps, is why Ukraine is not only buying the TB2 in such big numbers, but also making plans to produce it domestically.

Regardless of whether the TB2 performs to the very high expectations set out for it, it is undoubtedly a major upgrade of Ukraine’s defensive capabilities. Furthermore, establishing domestic production of the system will grant Ukraine the expertise and know-how to develop more sophisticated weapons systems, both for domestic use and export.

As such, it may yet prove to be a shrewd purchase.