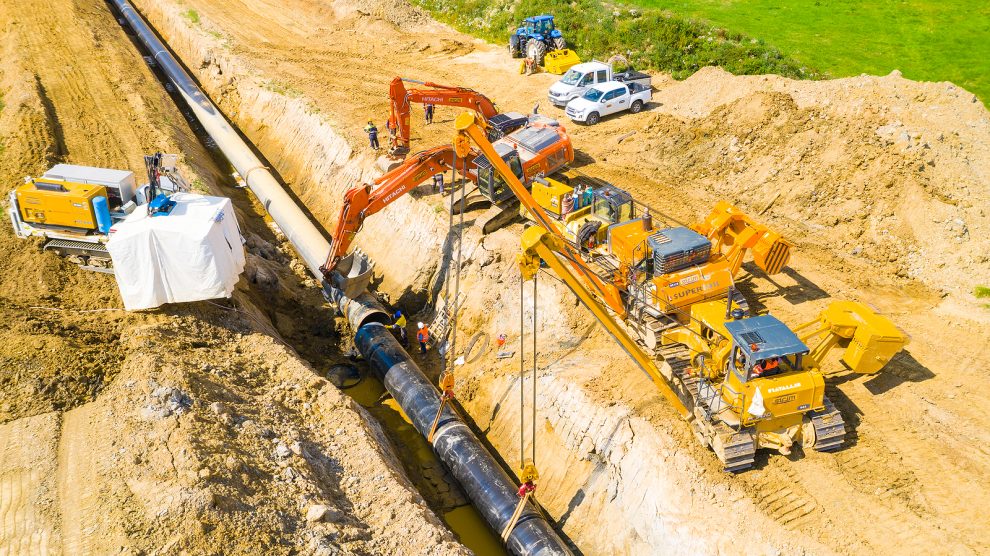 Joe Biden hosts his Ukrainian counterpart Volodymyr Zelensky at the White House later this month. Backing up words with action will be top of the agenda.

The United States and Germany have managed to remove one of the big transatlantic thorns by reaching an understanding on Nord Stream. But to make it work they will have to invest more in Ukraine‘s energy infrastructure.

President Joe Biden has extracted German commitments to mitigate the pipeline’s impact on European energy security. The question for Ukraine and our NATO allies in Eastern Europe is what this compromise looks like in practice. The region‘s stability now hinges on the US and Germany living up to their words and backing major investments to secure Ukraine’s energy independence.

The deal is strong on promises. It includes important pledges by Germany to back EU sanctions on Russia’s energy sector should it wield energy as a weapon to achieve its political ends. If upheld, this will surely make Russia think twice about meddling in its neighbours’ energy supply.

But ultimately, sanctions will carry little force unless Europe produces a plan for establishing alternative sources of energy and weakening Russia’s grip over its energy supply. That’s why the most significant component of the deal is its provision for investments in Ukraine’s energy infrastructure.

Ukraine possesses the second largest gas reserves in Europe and a vast network of pipelines and storage facilities, yet it currently relies on Russian gas imports to meet roughly a third of its domestic gas consumption. With Russian gas now capable of by-passing Ukraine’s extensive gas transit infrastructure via the Baltic Sea, the strategic imperative to leverage Ukraine’s vast energy potential is now greater than ever – both to shore up Ukraine’s energy security and to diversify supply in the rest of Europe.

The good news is that Ukraine represents the single largest growth opportunity for natural gas production in Europe. There are significant investment opportunities for modernising Ukraine’s ageing energy infrastructure and tapping Ukraine’s major onshore assets, such as in Yuzivska, as well as its Black Sea gas reserves. By some estimates, Ukraine needs as much as 30 billion US dollars of investment to achieve energy independence by 2030. This would also allow it to reach its production goal of 30 billion cubic metres of gas per annum by that year, an increase of about 50 per cent on today’s levels. The US and Germany must outline in concrete terms how they will support foreign investment into Ukraine.

Full integration of Ukraine into the EU’s energy system should now be a critical objective of EU neighbourhood policy. Ukraine’s gas storage facilities, the largest in Europe, can play a key role in linking European imports of liquified natural gas (LNG) between terminals on the Baltic, Adriatic, and Black Seas. Germany’s pledge to secure one billion US dollars of funding for Kyiv’s green transition will also go some way to helping Ukraine keep pace with the EU’s green energy drive. It also presents a long-term path to energy independence for Ukraine.

But in the short to medium term, there is a pressing need to expand Ukraine’s gas production. Nord Stream 2 could deprive Ukraine’s national budget of around two billion US dollars in transit fees by the time the existing supply deal with Russia expires in 2024. Germany has pledged to reimburse any lost transit fees until then, but there is uncertainty over whether an extension into the 2030s will ever find Moscow’s consent. To bridge the gap and become a net-zero importer of gas, Ukraine’s energy sector requires rapid investment.

Ukraine, Poland, the Baltic States and many in the US Congress have expressed concerns over the pipeline and the potential for bold commitments to turn into empty promises. Germany’s pledged support for the Three Seas Initiative, an energy and infrastructure forum of 12 EU states in Central and Eastern Europe, has done little to quell the concerns in the face of real and present security threats in Ukraine and elsewhere. In the meanwhile, Russian military forces remain deployed on the Ukrainian border since their latest escalation back in April.

The transatlantic alliance and the European Union must continue to be vigilant. This deal looks further into the future than tensions this summer. It sketches out a framework for reshaping Europe’s energy security based on investment in Ukraine’s vast gas reserves, support for energy transition and greater energy integration with the EU. NATO and the EU have until recently neglected investment in critical infrastructure, such as roads, bridges and railways. Co-operation between NATO and the EU is essential to this sort of development. By investing in greater integration of Europe’s energy systems, they will take an important step towards boosting our collective security.

When President Biden hosts his Ukrainian counterpart Volodymyr Zelensky in the White House this month, backing up words with action will be top of the agenda. The work to beef up Ukraine’s energy infrastructure must start now.

Urban regeneration: What is it, why cities need it, and how it’s done in Kyiv
The EU must stand for justice and democracy in Benin
Comment