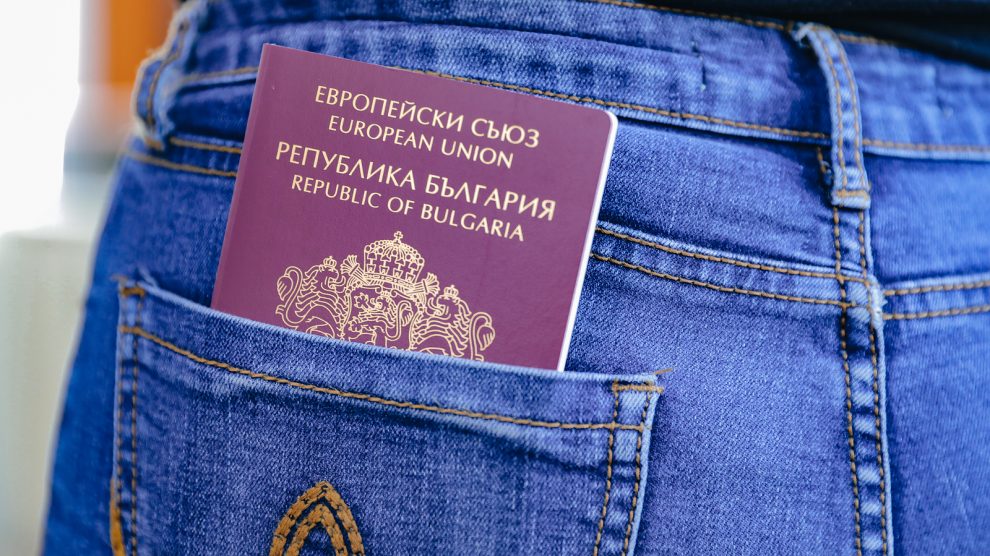 Bulgaria grants as many as 20,000 people citizenship each year. Most are from North Macedonia, but there are also applicants from Serbia, Ukraine, Moldova, and Turkey. Emerging Europe caught up with two would-be Bulgarians on the last leg of the multi-year journey.

It’s 2am early on a Thursday morning. Mateja and Luka, along with their father, are setting off on a car trip from a small village in Central Serbia to the Bulgarian capital Sofia.

For the two brothers it’s the last leg of a journey that has taken nearly five years — their pursuit for Bulgarian citizens.

They are not the only people from their village to have sought Bulgarian citizenship.

Their next door neighbour has done the same: he has since emigrated to Switzerland. This year he was able to move his wife and children as well.

Another man from the village has also chosen to emigrate to Switzerland using his new Bulgarian passport: he now works in construction, earning around ten times what he did in Serbia.

Since Bulgaria became a member of the European Union in 2007, tens of thousands of people have sought to become citizens. Last year 16,709 people became, officially, Bulgarians.

For most, it begins with having to prove Bulgarian ancestry. Mateja and Luka’’s mother, Svetlana, had to go through this process and it took several years to complete. For her sons, however, no such proof is necessary. Since their mother already has Bulgarian citizenship they are eligible.

Not that citizenship is granted automatically, mind you. There was still an interview process during which they were asked questions about Bulgarian history, their intentions once they become citizens, and most crucially their ethnic identity.

It’s important that the answer to this final question is “Bulgarian”.

Just how much individuals actually identify with their Bulgarian heritage is an open question, however. A passport from an EU member state doesn’t just allow for easier travel, it also opens up options for emigration to countries such as Austria, Germany, and Switzerland. It’s no secret that a Bulgarian passport is much more desirable at the moment than a Serbian or a Moldovan one.

An investigative piece from the Serbian portal Južne Vesti reveals as much. In it, a resident of Vranje, a city in the south of Serbia close to the Bulgarian border talks about citizenship opening opportunities “for a decent life in the EU”.

Even the interview itself is largely pro forma, Mateja and Luka tell Emerging Europe. It only took ten minutes and while it ostensibly required knowledge of the Bulgarian language — the pool of questions is known ahead of time allowing those taking it to memorise a cheat sheet.

Who supplies the cheat sheets? One of the many agencies around Sofia, which, for a fee, guide applicants through the entire process from start to finish.

It’s 8am local time in Sofia when the family meets up with Desislava, one of the agents helping people to become Bulgarians. Desislava is friendly and her bubbly personality puts people immediately at ease: an important advantage for someone who spends their days dealing with bureaucracy.

Another advantage is that she seems to know all Ministry of Justice workers dealing with citizenship. Mateja and Luka are quickly shuffled through a security screening and fifteen minutes later emerge with written confirmation that their citizenship applications have been approved.

Officially Bulgarian citizens, all that’s left is applying for IDs and passports. That comes a little later. For now, there’s nothing to do but enjoy the sights of Sofia.

As they walk, a conversation about the citizenship process ensues. According to Desislava’s estimations, since 2007 some 150,000 people have become Bulgarian citizens. Official data, available from 2012, seems to confirm her ballpark figure.

“This way I will honour my mother’s side of the family,” says Luka.

Still, he does note that having a Bulgarian passport in his possession will also allow him unlimited travel to the EU and could also open up business opportunities in Bulgaria for his company.

Svetlana, his mother, echoes these sentiments.

“Bulgarian citizenship means a proof of another part of my heritage, and that makes me very happy.”

But she also sees the practical side of things.

“With this my children have gained the option of education and work in Bulgaria and other EU countries. For me and my children this is an important thing and I am thankful for the opportunity,” she says.

What’s in it for Bulgaria?

Official data reveals that of the more than 16,000 people who received Bulgarian citizenship last year, most came from North Macedonia: some 9,000. That’s more than six times the next largest group, Ukrainians. Serbia shares third place with Moldova, around 1,200 people. Others come from Albania, Turkey, Russia, and Israel.

A question does arise from all this — what benefit is there for Bulgaria, given that most people who become citizens don’t actually move to Bulgaria?

Recent changes to Bulgarian law have been aimed at making the process faster and easier, implying that the country’s government sees its new citizens in a positive light, and would welcome more.

“As far as I am aware, most of the people that apply for Bulgarian citizenship following 2007 are from the Balkans or Eastern Europe,” says Violeta Manolova, a historian from the Institute of Balkan Studies and Centre of Trachology at the Bulgarian Academy of Sciences.

“By making the citizenship procedure easier Bulgaria could to some extent compensate the labour gap caused by the emigration of its own population, especially among young people. It also shows a will for wider integration of people and citizens from countries outside the EU.”

Back in Sofia, it’s time for the official passport photos.

Desislava is there again. And again she seems to know everyone at the passport office. A few forms are signed, a quick photo, and it’s done. The actual documents will take some time to arrive but the journey to Bulgarian citizenship is, fundamentally, over.

Due to the sensitivity of issues surrounding ethnic identity in the Western Balkans, names in this article have been changed to protect the privacy of those involved.