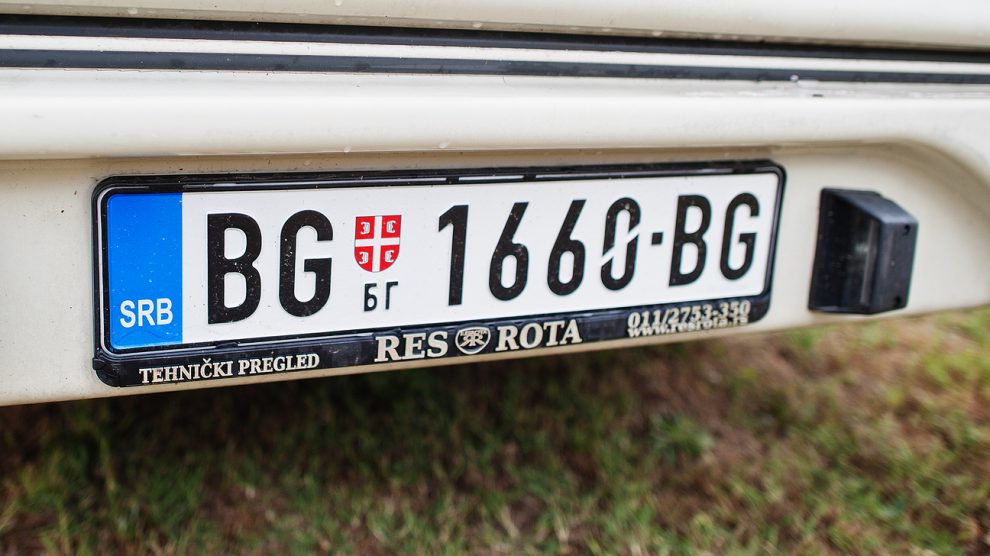 Relations between Kosovo and Serbia are at their lowest ebb for years, with the border between the two countries blocked by Serbs unhappy over new licence plate rules.

Kosovo and Serbia are blaming each other for a dispute over vehicle licence plates that on September 21 led to border crossing points between the two countries becoming blocked.

The dispute began the previous day, when Kosovo began implementing a policy which requires vehicles entering the country with Serbian-issued licence plates to replace them with temporary, Kosovo-issued plates costing five euros.

Serbian President Aleksandar Vučić called it “one of most difficult days for the Serbian people in Kosovo”.

The border was blocked by protestors from the predominantly Serb-populated north of the country, who Kosovo police were unable to disperse despite using tear gas.

Kosovo’s decision to begin implementing the new rules is seen by analysts as yet another tit-for-tat move: Serbian police have been removing Kosovo-issued license plates entering the country for years.

“While a 2011 agreement allows Kosovars to travel into Serbia with identity documents issued by Prishtina, and vice-versa, and a further agreement in 2015 establishes mutual recognition of car insurance. However, the two sides do not recognise one another’s car licence plates and require cross-border drivers to purchase temporary plates,” explains Maja Bjeloš, a researcher at the Belgrade Centre for Security Policy.

This issue was supposed to have been solved in 2016 with a new agreement that would allow Kosovar drivers to paste stickers over “offending” [i.e. Kosovo] insignia on their licence plates, but the deal was never actually implemented in practice.

Besides never being fully implemented, the “sticker deal” was limited to a period of five years. Kosovo claims its actions this week are based on the fact that the deal has expired.

“The Kosovo government announced well in advance that the five-year sticker agreement will expire in mid-September 2021, and that there will be no extension,” Bjeloš tells Emerging Europe..

“Meanwhile, Vučić has done nothing to extend the deadline or renew the agreement or to inform and prepare [Serb] citizens about how reciprocity will function in practice.”

A smorgasbord of agreements

For Bjeloš, this an example of how Serbs in northern Kosovo are being held hostage to the Brussels-led process designed to resolve the status of Kosovo once and for all, but which has been stalled for months.

“Due to the non-transparency of the entire negotiation process, the public does not know the basics – what was signed and when, and which agreements have expired,” she says.

Zijad Bećirović from the Ljubljana-based think tank IFIMES similarly notes that the two sides are treating the previous agreements – including the deal signed in Washington last year – as a “smorgasbord” from which items are chosen selectively.

In her recent farewell tour of the Western Balkans, German Chancellor Angela Merkel again said that the status of Kosovo must be resolved before Serbia can enter the European Union.

But with dialogue halted, this latest dispute suggests that the negotiation process is heading into reverse, back to a time of so-called “reciprocity policies” that in 2019 resulted in Kosovo imposing 100 per cent import tariffs on Serbian products in response to Serbia’s de-recognition campaign, which began in 2017 and led to around a dozen countries which had previously recognised Kosovo’s independence changing their minds.

“The Kosovo government will want to be treated as an equal partner. So, yes there will be more of the same type of policies,” says Vladimir Gligorov, a senior research associate at the Vienna Institute for International Economic Studies (wiiw).

“I believe this marks the beginning of reciprocity as he [Kosovo prime minister Albin Kurti] understands it, and we’ll see where he takes it from here. One step he could consider, for instance, is demanding different or additional labels for Serbian products,” he tells Emerging Europe.

No commitment to dialogue

All of which makes the prospect of renewed Kosovo-Serbia dialogue increasingly unlikely.

“Kurti and Vučić should be held accountable for making freedom of movement more difficult and increasing tensions by engaging Kosovo special police forces and the Serbian army instead of engaging in diplomatic talks. Caught in the crossfire, citizens will bear the greatest consequences,” warns Bjeloš.

One further issue, according to Savković, is that both Kosovo and Serbia currently see the EU as weak and are willing to test its limits.

“One way out would be for the EU to take a firmer stance, to start setting the agenda once again, to note and report all failures to implement existing agreements and hold both sides to account. I would go as far as suggesting the suspension pre-accession assistance until both sides show a renewed commitment to dialogue,” he says, but adds that such a risky move is unlikely.

“Relations between Serbia and Kosovo are at their lowest level since the start of the EU-brokered negotiations in 2011. Both the Serbian and Kosovan leaders are acting as if they do not want dialogue to succeed. Both are showing little commitment to implementing current agreements, or to working on a final, comprehensive deal,” Bjeloš concludes.

How empowering women could boost CEE economy by 146 billion euros
Digitalising public services is not about cost, but making them better, reveals new white paper
Comment