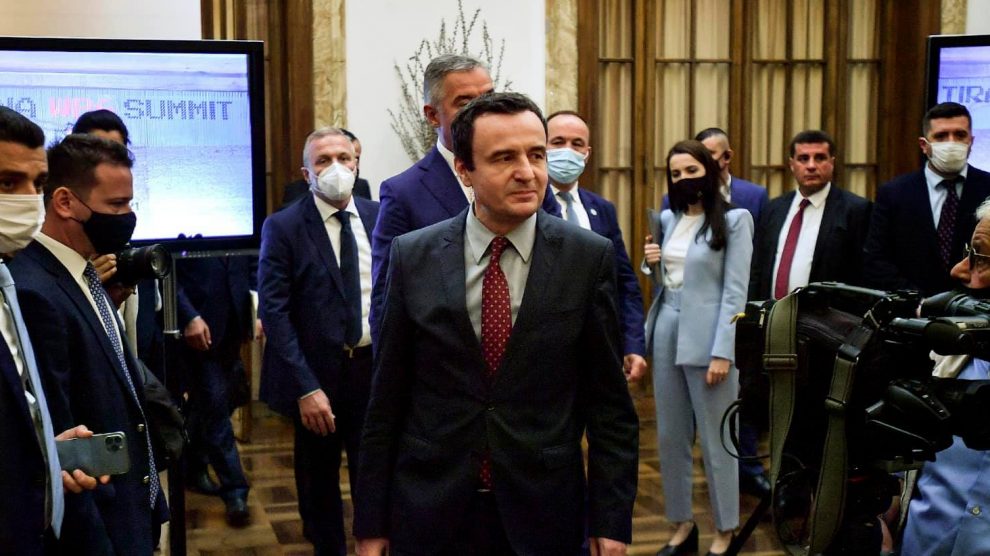 Just as it looked as though talks between Serbia and Kosovo would resume as early as next week, a row between the prime ministers of the two countries might have set the normalisation process back months.

On Wednesday a step forward, on Thursday a step back. A day after Peter Stano, a spokesperson for the European Commission, confirmed that the leaders of Serbia and Kosovo would meet on June 15 for a new round of talks on normalisation of ties between the two countries, Serbia’s Prime Minister Ana Brnabić has clashed with her Kosovo counterpart Albin Kurti at a Western Balkans summit in Tirana.

Brnabić, in response to a request Kurti that the Western Balkans free-trade agreement, CEFTA, be redefined so that Kosovo was treated as an independent state, said that there was no need to change anything, “because Kosovo is a part of Serbia”, pointing out that Kosovo is not recognised by five European Union member states, that it is not a member of the United Nations and that “we cannot be equal partners”.

Kurti reacted to that with the question, “What are you going to do, do you want to occupy us?”, to which the Serbian PM replied, “How do you think we might occupy our own territory?”

“There was a sort of debate, because she [Brnabić] did not want to accept that Kosovo is an independent and sovereign state. I stressed that Serbia needs to distance itself from the regime of Slobodan Milošević, as there is no other solution apart from recognising the independence of the Republic of Kosovo,” Kurti told the press, who suggested that Serbia was keeping itself “hostage”.

Despite the row, Serbia’s President Aleksandar Vučić is still expected to meet with Albin Kurti in Brussels next week, at talks that will be mediated by EU foreign policy chief Josep Borrell.

‘This could be the year of the Western Balkans’

The summit, which was chaired by Albanian PM Edi Rama and also attended by leaders of Albania, North Macedonia, Montenegro and Bosnia and Herzegovina, as well as the European Commissioner for Enlargement Olivér Várhelyi, ended without a joint declaration because of the row between Kurti and Brnabić.

Várhelyi nevertheless tried to remain positive, saying that, “this could be the year of the Western Balkans, but we all need to deliver”.

The Commissioner added that the EU’s Western Balkans Economic and Investment Plan, unveiled in October 2020, aims to mobilise around 30 billion euros over the next decade, around one third of the region’s GDP.

“But that plan will never work if the region does not work as one,” he said.

“If we do not have a regional market, there is no point in building highways, where the trucks will have to stop every hundred kilometres at the borders. There is no point in building railways, if trade is slowed down by obstacles. There is no sense in creating new trade routes, if you need to have at least six different types of certifications of goods and having to pay taxes on goods. So, this economic plan will only deliver if the region also delivers a regional market – that is the environment in which this Economic and Investment Plan can work.”