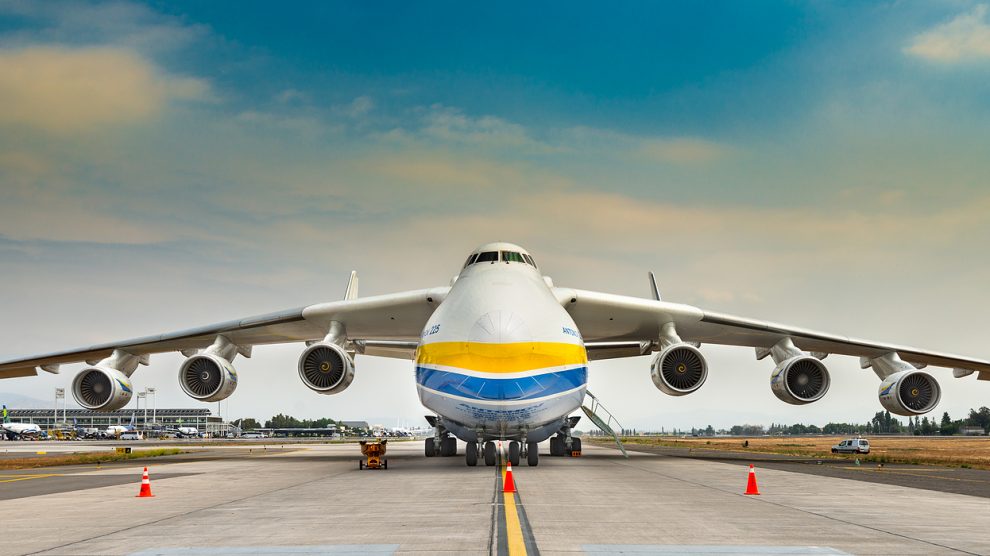 The deterioration of Russian-Ukrainian relations could have lead to the demise of iconic aircraft manufacturer Antonov. But there is renewed hope that the iconic brand is about to make a comeback.

Anybody who has had a chance to see the world’s only AN-225 Mriya in person has witnessed one of humanity’s greatest feats of engineering.

At a glance, the 285 tonne aircraft with six engines and dozens of wheels has no business being able to fly. Yet, more than thirty years after the plane’s debut flight, it continues to haul heavy cargo across continents.

However, Antonov – the Kyiv-based state-owned aircraft manufacturer that created and built the AN-225 – has been in steady decline for years, a decline which accelerated following the outbreak of war in eastern Ukraine in 2014.

With relations between Russia and Ukraine currently more frayed than ever, Antonov – arguably the most internationally recognisable Ukrainian brand – has found itself in the crossfire.

The company, which employs around 14,000 people, has not manufactured a single aircraft since 2015. Revenue primarily comes from the in-house Antonov Airlines, the operator of the AN-225, which specialises in oversized cargo.

Antonov was founded in 1946 in Novosibirsk in Russia and produced the iconic AN-2 crop duster in its earliest years (alongside some bizarre designs, such as a flying tank).

In 1952, it relocated to Kyiv, a city with a rich aviation history. Since then, it has produced more than 22,000 aircraft, including the AN-24, which carried nearly a third of all Soviet air passengers.

From the 1960s onwards, Antonov began focusing on heavier cargo aircraft. This led to the creation of the AN-124 Ruslan, the largest mass-produced aircraft in the world which still forms the backbone of Antonov Airline’s fleet.

The mammoth AN-225, currently the world’s heaviest aircraft, was based on the Ruslan and was commissioned in 1985 to carry the Soviet Union’s doomed Buran space shuttle.

And yet while Buran made only one (unmanned) flight, the AN-225 continues to roam the skies.

Only one AN-225 has ever been built. A second, which engineers started constructing more than three decades ago, sits in Antonov’s warehouses in Kyiv, half-complete.

The Soviet aircraft manufacturing industry was built to operate as one organism, and production was often decentralised to make it more difficult to disrupt in times of war – the break-up of the Soviet Union in 1991 snapped supply chains.

Despite this, Antonov initially fared much better than other Soviet aircraft manufacturers, like Tupolev and Ilyushin as Antonov Airlines managed to keep the rest of the company afloat by servicing the cargo market.

Furthermore, since the 1990s, Antonov planes, crewed mainly by pilots from former Soviet countries, have played a major role in delivering materials to some of the world’s most remote places.

During civil wars in the Democratic Republic of Congo and Somalia which led to devastating humanitarian crises, Antonov planes were a regular fixture in the skies, delivering relief materials on behalf of humanitarian organisations.

However, with manufacturers for parts scattered throughout Russia and Ukraine, it became excessively difficult for Antonov to continue producing its own aircraft. Initially, there was a solid degree of cooperation between the governments of Ukraine and Russia in joint aircraft production. This led to the ill-fated AN-148 project, which encapsulated the problems faced by the airline.

Designed by Antonov in Kyiv, more than half of the plane’s parts are manufactured in Russia, while the engine is made in Ukraine. Production was discontinued after Russia’s invasion of Ukraine, annexation of Crimea, and the outbreak of war in 2014.

In February 2018, an AN-148, operated by Saratov Airlines, crashed outside Moscow due to pilot error, killing 71 people onboard. The Russian government then suspended all flights using the aircraft. Shortly afterwards, Cuban aviation authorities grounded their fleet of AN-158s (a longer version of the AN-148), citing “multiple and repeating failures…found in complex systems” and “evidence of design and manufacturing flaws”.

For some time, it appeared as though Antonov was destined to meet its demise. As a state-owned firm, Antonov could not continue trading and cooperating with Russian manufacturers.

However, since 2015, Ukraine has been reorganising its state-owned defence industry, including Antonov, which now operates under Ukroboronprom, an association of multi-product enterprises in various sectors of the defence industry.

This has led to the creation of a new, fully-Ukrainian design, the AN-178. It has already attracted suitors from Peru and China, with the latter ordering 50 units, which are set to be assembled in China. The Iraqi Air Force has also reportedly made an order.

With the AN-178, there is yet hope for Antonov. While for the past three decades the company has been kept afloat largely through its cargo fleet, being able to independently produce a workable aircraft will allow it to reestablish itself on the market and make Ukraine a hub for aircraft manufacturing once again.

Few countries have the capacity and know-how to build aircraft: Ukraine and Antonov are in a unique position which they can capitalise on.

It would be a shame to see it go to waste.