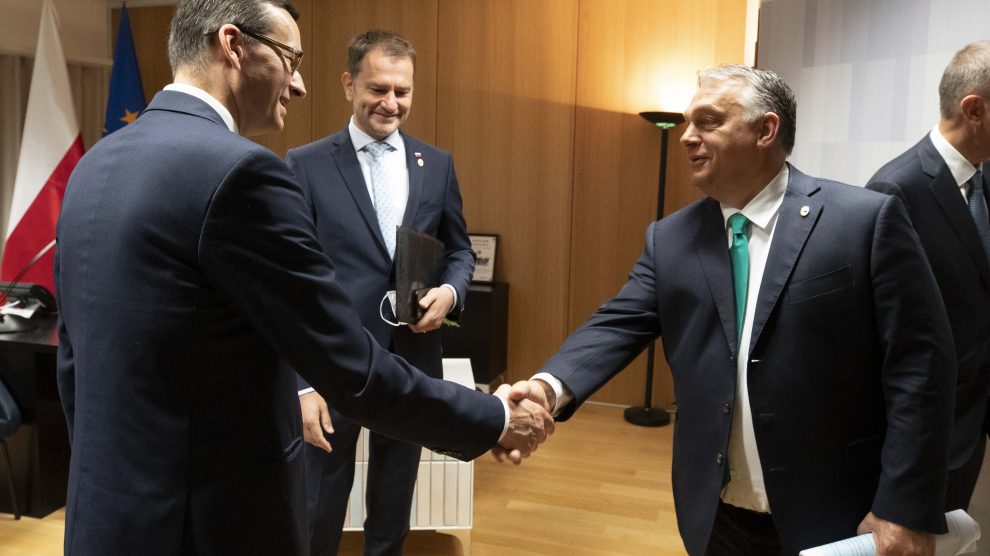 Poland and Hungary’s ruling parties could join Italy’s Lega to create the third-largest group of MEPs in the European Parliament.

At a press briefing following talks in Budapest on April 1, the politicians vowed to continue cooperation in pursuit of what Orbán called a “European renaissance.” However, few details on the nature of the alliance were revealed.

Salvini called the meeting “historic” and noted the symbolism of it falling on Holy Thursday.

But it is an odd move for a Polish PM, given Orbán’s friendly relationship with Russian President Vladimir Putin. Hungary uses Russian oil, gas and nuclear power, and became the first EU country to use a Russian vaccine for Covid-19. Salvini is also pro-Russia.

“Today it is necessary to discuss building a strong group which will defend the traditional, normal values on which European civilisation has developed,” Morawiecki said before setting off for the Hungarian capital.

Salvini wants to unite his Identity and Democracy (I&D) faction with the European Conservatives and Reformists (ECR) group. Merging the ECR, I&D and introducing Orbán’s MEPs would create the third-largest group in the parliament, with at least 146 members.

Orbán’s nationalist policies are a better fit with smaller blocs to the right of the EPP – notably the eurosceptic ECR that includes PiS and the I&D faction, which includes Lega and Marine LePen’s National Rally from France.

Orbán said Fidesz had politically drifted away from the EPP on several issues, including on taxation and migration. He said the party disagreed with the way EPP members had approached the coronavirus pandemic.

The ECR group in the European Parliament reportedly plans to initially open its doors to Fidesz and then to bring in the Slovenian Democratic Party (SDS), which is also an EPP member though its leader, Prime Minister Janez Janša, and which is ideologically close to Orbán.

The condition for Lega to join is said to be excluding the Brothers of Italy (Fratelli d’Italia), led by Giorgia Meloni, whose demand to lift EU sanctions against Russia has irritated PiS.

‘Our type of people’

Salvini said he wants to create a “new idea of Europe”.

“We also talk about migration policies, international alliances, attitudes towards Russia, China and the role that Turkey is playing, which is indeed, a problem at the gates of Europe,” he said.

Orbán said last month that he envisaged a new right-wing force of “our type of people”.

The group would give “a home to all European citizens who do not want migrants, multiculturalism, who are not addicted to the LGBT mania.”

The Hungarian premier added that it would be a platform for those “who protect Christian traditions, respect national sovereignty.”